Tuesday A.M., I had planned to go on one of the American Red Cross tours around the town with some of the enlisted men, but as luck would have it, the bus we were supposed to go in was completely frozen that A.M. and so the trip was off.  It was plenty cold that day and alternately snowed and rained, mostly rained. The streets and sidewalks were mighty slick and many a person found himself in a prone and undignified position that day. Anyway, I went sight-seeing by myself, going partly by subway but mostly walking. I had plenty of clothes on and it was O.K. outdoors, so when down in the subways with that much clothing on I felt too hot.

I wandered around mostly in the area between the Opera and Notre Dame.  I went through Notre Dame, but unfortunately there is very little light there — the electricity being off in the daytime there as in other sections.  I saw the Treasure Room there, however. A number of the stained glass windows have been taken out, of course, but there are still a large number remaining.  I walked all over the little island on which Notre Dame stands. Then walked to La Place de la Bastille, back up through les Halles Centrales and the Bourse de Commerce.  Passed the Louvre, but there was no admittance there at this time — very little left in there anyway they say.  What wasn’t taken has been hidden.  Saw Les Tuileries, which was under a good foot of snow, la Place Vendome, etc.

Finally back at the hotel for a late lunch and then met there by Jeanne. We walked up to the front of Maison Blanc where we were soon met by Lilice and then by Monique! That sister of yours, Alain, is everything you ever said about her. She is wonderful! The picture she had sent me about a month ago did not do her justice at all. She’s extremely pretty, looks fine tho’ she is, apparently by nature, thin. She and Lilice, after we said good-bye to Jeanne, took me around town a bit more – to the Pantheon, thru the Sorbonne area, and then way out to Monique’s apartment, which is way on one edge of town – the opposite edge from where Lilice and Jeanne live.

Monique has apparently managed well. She was unmolested at any time – having the name Perotin, she was not liable to have a nasty investigation as much as those with more Jewish names. She’s a plenty smart gal. Her apartment is spotless – she has a bedroom, bathroom, kitchen, and small dining-room-living-room. Everything seems to look new. As far as food is concerned, she has apparently not fared as badly as some of the others, for she seems to know all the tricks of buying, just when and where to buy things, etc. Of course, she had the advantage in that she remained in Paris the whole time and was able to get all that information and all the tricks over a long period of time, whereas most of the others were moving around a good deal, and did not have time to learn a great deal about any one community.

Monique has not heard from Robert for some months now – apparently, too, the prison camp he was in was moved after the Russians started to advance nearby – he was near Vienna I believe she said – and since then she does not have any idea where he might be. Last she heard from him, however, he was O.K.

Monique, for the benefit of those who have not seen her or her pix in past years, is rather short, thin, dark and vivacious. She had her dark black hair in screwy curls in front and, of course, had a typical nutty Paris hat somewhere stuck on the back of her head. She and Lilice talked so fast, as a matter of fact, that I had a helluva time trying to figure out what they were saying.

When we reached the yard of the apt. house Monique lives in, the prize monkey came running towards us and jumped upon me with his arms around my neck. He had been warned of my impending arrival at noon that day, and apparently didn’t get any work done at school that afternoon at all. He’s 8 years old and goes all over by himself. He has to go to school by subway and apparently everyone in the neighborhood knows him very well. Monique says that frequently when she is introduced to someone they reply, “Oh, yes, you’re Bernard’s mother.”

He’s just that kind of a kid. Most friendly, full of pep, and smart as the dickens. He’s a good-looking kid too. He’s small and wiry and never sitting still for a minute. He keeps dancing around, tagging, whirling around the tables or chairs, etc., etc. He was most disappointed that I didn’t have any gun with me to show him. But his eyes darn near popped when he opened a box I bro’t there and he saw all the chocolate and the gum. I think that if his mother had let him, he would have eaten all ten of the chocolate bars at once. He did put two pieces of gum in his mouth and started pulling it out in long strings. Looks like he’s going to have plenty of fun with it.

Had fun showing Bernard, on his geography map, just where you, Alain, are in N.Y., and where S.F. was. His map didn’t have S.F. on it, but it does now. Had tea and cake there and ‘twas mighty good. Both your other sisters, Alain, are fine, according to Monique, but I did not get a chance to see them.

Watch for the conclusion of this letter
February 2, 1945 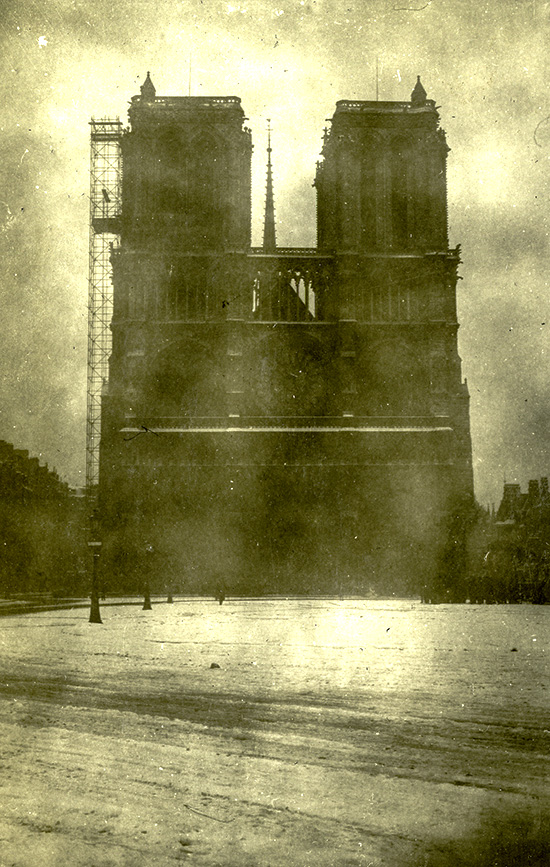 On Tuesday morning, René went sight seeing by himself, including visiting Notre Dame (above and below). 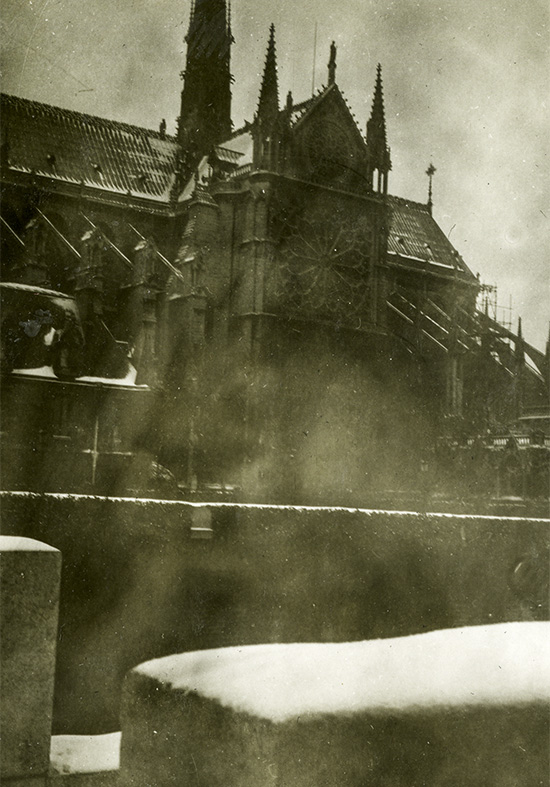 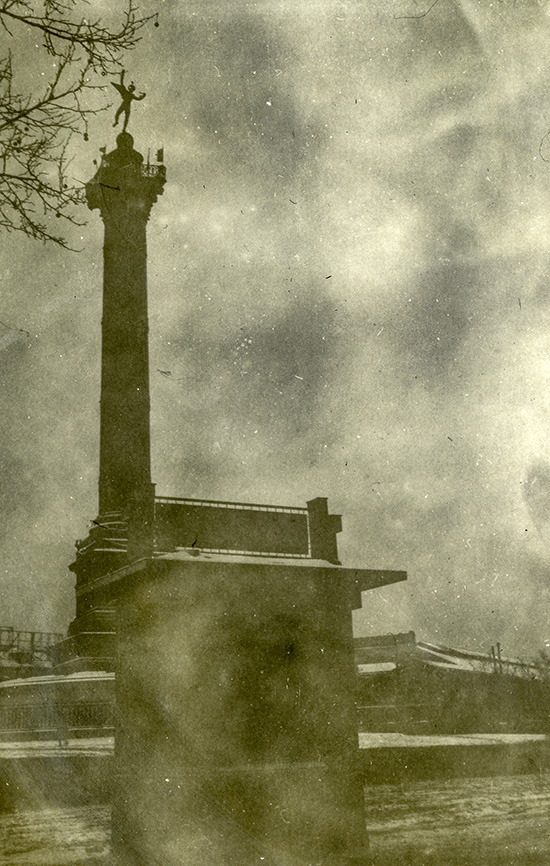 He also walked through Place de la Bastille (above) the Tuileries (below), which “was under a good foot of snow.” 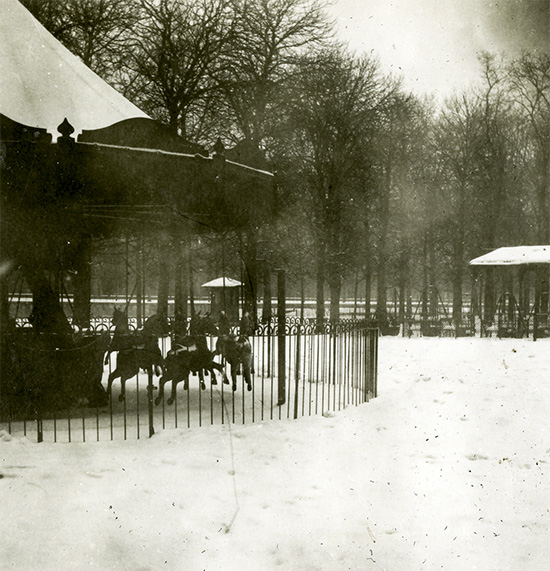 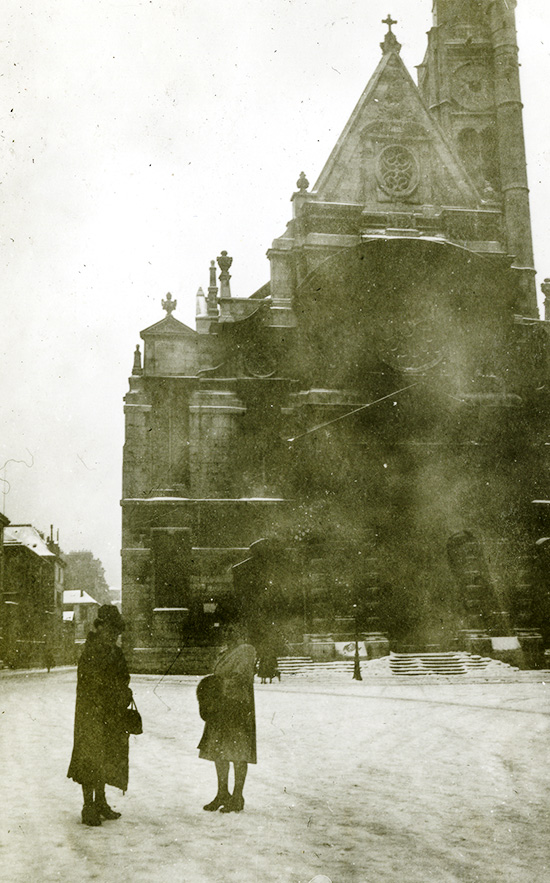 Later he met up with Lilice (left) and Monique Dreyfus Perotin (right) —  the sister of Alain Dreyfus.