August 12, 1944
Somewhere on the Mediterranean Sea

It’s hotterin ‘ell and “bloody” sticky.  As I write, the sweat is pouring off me and the paper is rapidly beginning to curl.  Don’t let anybody ever tell you that a Mediterranean cruise is a pleasant thing, at least at this time of the year.  How people could cruise around at this time of year in peace time is beyond me — particularly in mixed company, for it is still damn far from comfortable, even au naturel.

We’ve been roasting like this on the water for a couple of days, having sat, sweat and swat for a couple of days before that in a sunny, grape-vined area, which was covered with a foot of dust.  Even the salt-water showers aboard ship were a godsend.

Our accommodations are really pretty good – far better than on our trip from the U.S., though I must admit that the food on that trip more than made up for the uncomfortable quarters that we lived in. Here there are only four of us in a room — a small room with two double-deckers.  And if the weather were not so bloomin’ hot, it would really be okay.

The food that we have is good, but what the enlisted men get is definitely not good.  The British are very different from the Americans in that respect.  Their officers get excellent food and their men very poor stuff, poorly prepared; while in our Army and Navy the only difference is in the preparation and a few little extra niceties that the officers get. We’ve had some excellent roast-beef, lamb chops and pork. Another thing we get, naturally, is afternoon tea. The heck of it is that it merely serves to heat you up all the more and gives you more liquid to have pouring down your brow and back.

Leave it to Roy – à la R.B. Sr. — the first night aboard he gets the Captain of the ship down into our stateroom for cocktails before supper.  He had also gotten acquainted with the radio officer, who was a very nice and mighty interesting fellow. So, with them, a British officer and a French Captain, we have had quite the little gathering in our cabin.

This afternoon I had a good bridge game – seemed to hold all the cards for once, with some of the strangest distributions I’ve ever had.

We had sort of a funny deal — we were told to turn in all of our money (all of it) and then we find that we can buy lemonade and carbonated-ade on the ship. But with no money, we’ve been in sort of a pickle.  ‘Tis well, however, that we we did make the acquaintance of some of the Britishers, as their money is good on ship, and we’ve managed to do fairly well.

‘Tis the end of the page, just about the end of what I had to say. ‘Tis still hot, though 10 P.M., so shall disrobe and climb into my bunk. 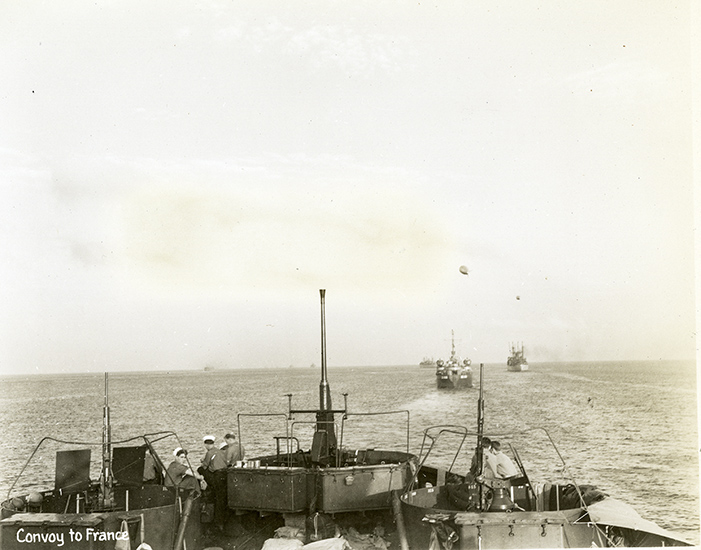 René is one of four doctors from the 59th Evac Hospital who are on a ship heading for the south coast of France. Along with the doctors are three enlisted men: Clint Green, Chuck Davis and Kioski. 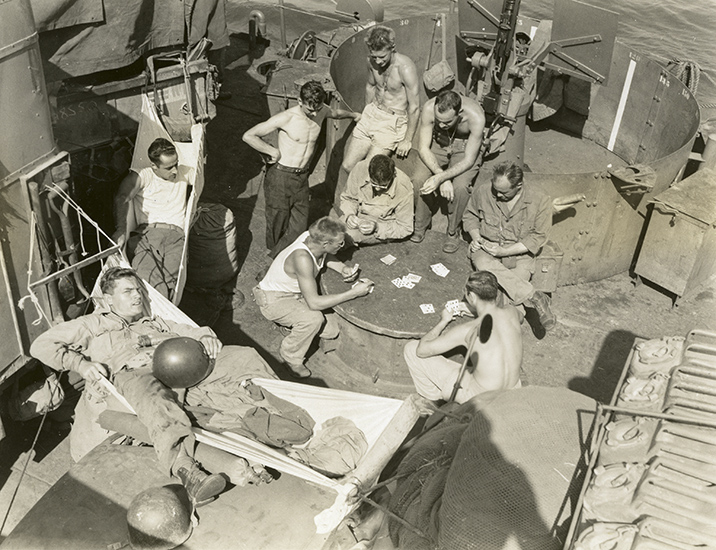