An interesting P.O.W. patient the other night, who surprised us all by starting to talk in excellent English with all the high-school language trimmings.  It turned out that his story was that he had lived for 15 years in Springfield, Mass. (He’s only about 20 now.) that his father had gotten pneumonia and after he had recovered had been advised to get away and take a trip somewhere for a rest.  So, the father had come over to Germany (his Fatherland) and while over here again got pneumonia.  As he was expected to die he sent for his family (wife, son and daughter) and they came over in a hurry, just at the tail end of ’38 or the beginning of ’39.  The father didn’t die right away and before they knew it they were stuck over here.

The kid went to school and thus stayed out of the army until last year, when he was pulled in, and after a short induction period, was put in an officer’s training school.  He had just graduated as a cadet officer and was in his first day of combat when he was captured.  And he was mighty happy to have been captured and also to have gotten off so easy.  He said, but knowing the Germans and the stories we have heard from them in the past one takes them all with more than just a few grains of salt, that he was supposed to be firing on an American tank, but instead he wasn’t even aiming at the tank and purposely made his bazooka backfire and thus sustained the burn for which he was hospitalized.  He told us that the thing he missed greatly over here was the inability to go down to the corner drug-store and get a milkshake or a package of gum anytime he felt like it.  They just don’t have those things over here, he said.

The wind has really been blowing today — had to get out and tighten up all the ropes on our tent and dig in some more pegs, etc. for fear the whole thing would take off and join the planes overhead.  Of course, being on the top of a hill gives the wind an excellent chance to work us over, but so far I haven’t seen any of our tents go sailing. 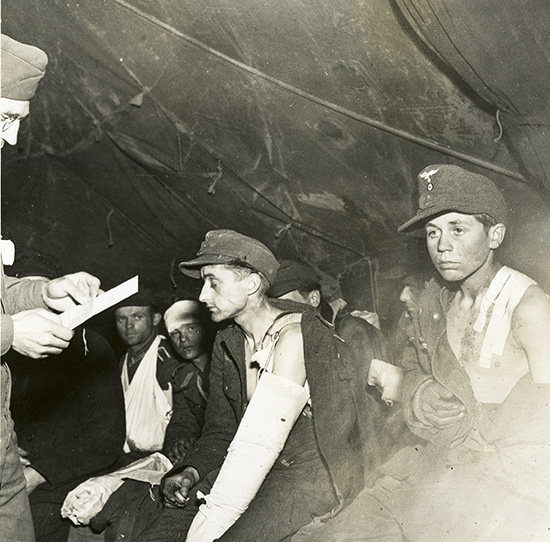 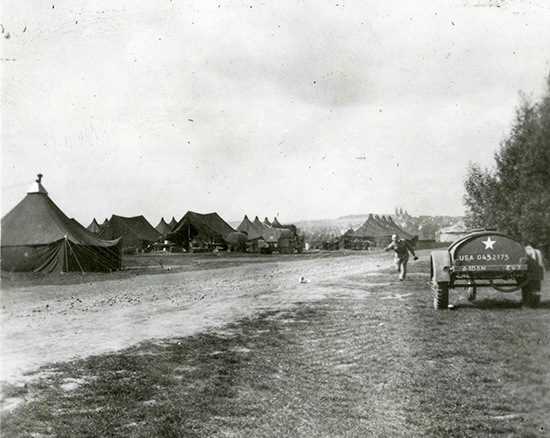 As René mentions in his letter, being in tents poses some challenges – especially when the wind is really blowing. 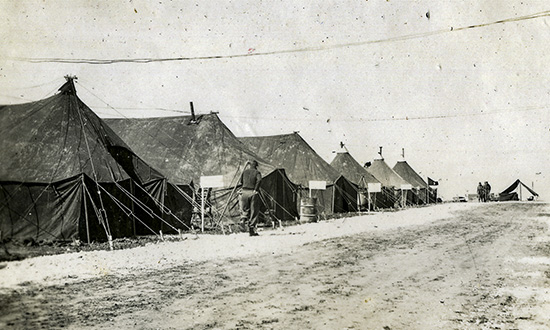 René’s caption for this photo of tents reads: “Administrative Row.”