The evening of the day that Mattie and Phil returned, Wally got up enough nerve to ask the Col. if, since the “Gang-Greene” was off duty the next day, it would be possible to visit Heidelberg.  To Wally’s surprise the Old Man agreed that it would be a good idea and offered the command car as transportation for us, suggesting that we start out early and come back when we had seen all we wanted to see there.

The next A.M. we sort of got off to a false start for, on the way we were supposed to deliver a supposedly important message to an outfit that, according to Dunlap, was located in the little town past another town on our way. When we got to that spot and found that Dunlap had erred seriously, for the town we were supposed to go to was actually a long distance in the opposite direction from the one we were going. As the message was presumably of import we went clear on back to camp and dumped the message back in Dunlap’s lap, taking off once again about an hour and a half later than our 1st start.

Besides the “Gang-Greene” (Carroll, Wally and myself), we took with us Lou Huff and Bill Newsom, “Dutch” Boven driving.  We couldn’t have picked a better day for the trip.  The sun was shining brightly all day long and tho’ ‘twas  breezy in the back of the command car, as it was wide open, the whole ride was most comfortable and we had a marvelous time.  The scenery was really beautiful, what with the low hills, the rolling farm-land, the fields partly plowed, and the tremendous amount of equipment moving up the highways to the front.

One funny scene we noted on the way was an abandoned German anti-aircraft searchlight, which was being utilized by a small group of German kids as a merry-go-round.  They had the light pointed toward the sky and were going round and round with it having a great time, sitting on the edges of the light.

The Rhine was just as expected, wide and with every formerly permanent bridge just a mess, having been blown, of course, by the Krauts themselves.  Our engineers certainly did a wonderful job of throwing make-shift bridges across that river.  It was interesting to watch the heavy trucks crossing the pontoon bridges and to see how the bridge sagged in sections into the water as the trucks made progress across them.

Mannheim was quite a revelation for us.  What a mess!  Our bombers certainly did a fine job there.  Oh yes, there were shells of buildings still standing, but when one looked closely one noticed that that was all that was left, there just wasn’t any inside to those buildings.  Westdahl had told us, too, how, when flying over Mannheim and a couple of other places, one could get a better idea of the destruction because one could see right down to the basement of these buildings from the air — there being just no insides at all.

There were a lot of scrawled signs on the building walls throughout the city, signs that had been put there before our advancing troops got anywhere near, and then there were some proclaiming that Mannheim would be rebuilt once again — all those in German, of course.  And then there were the ones obviously chalked on the walls by some G.I.s and most appropriate too, stating, “Vorn Mannheim,” or “Formerly Mannheim.”  That really hit the nail on the head.  We passed what used to be the Opera House, some of the large hotels, the City Hall — all were a mess. The circular and sunken gardens in the center of the city, by the Opera House, had been cleared of its rubble and looked as if once had been a mighty pretty spot, but no longer….. 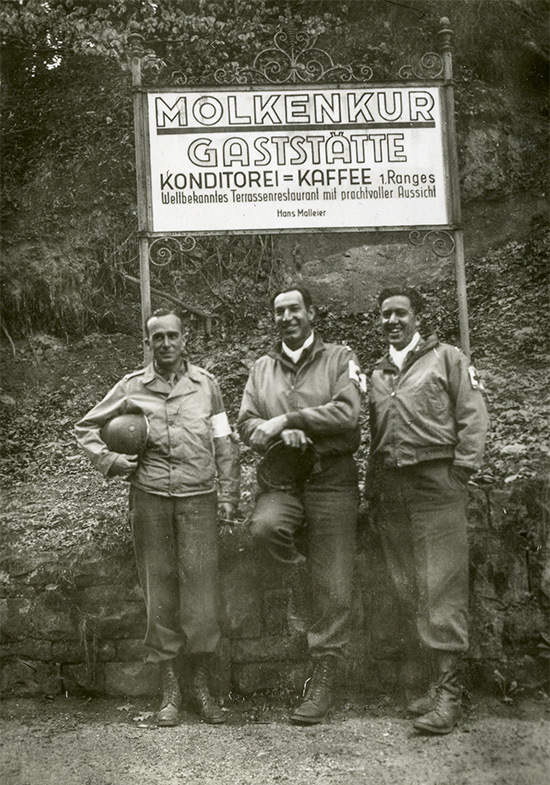 The “Gang Greene” surgical team – from left to right: Wally Greene, Carroll Russell and René – on their visit to Mannheim and Heidelberg. 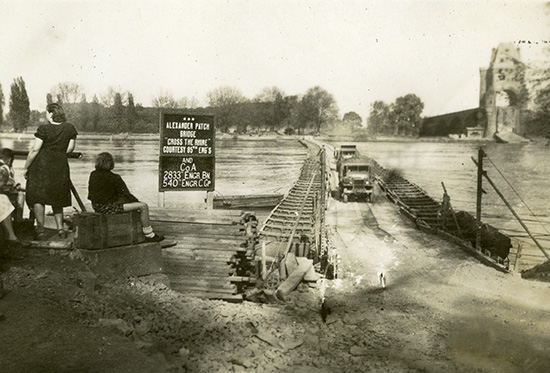 René mentions the pontoon bridges across the Rhine – like the ones he took photos of (above and below). The one above is the “Alexander Patch Bridge” named for Lieutenant General Alexander Patch, commander of the 7th Army from March 1944 through May 1945. 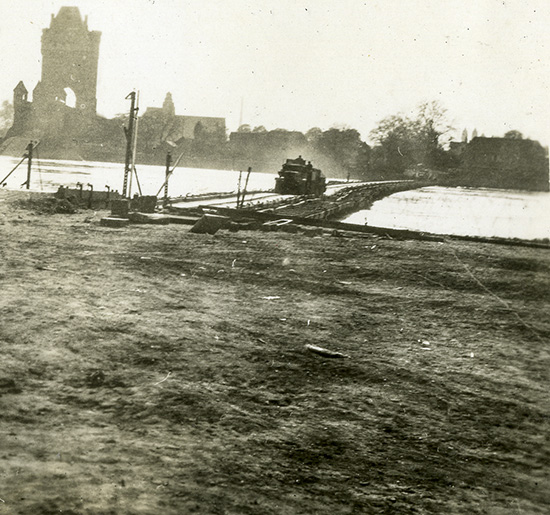 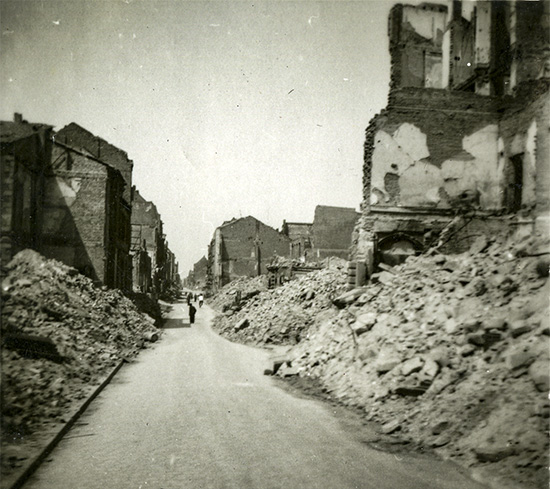 Photos (above and below) that René took of the destruction of Mannheim. Although he didn’t take a photo of the signs, he noted that some G.I.s had chalked “Vorn Mannheim” on several walls of the city. Translation: “Formerly Mannheim.” 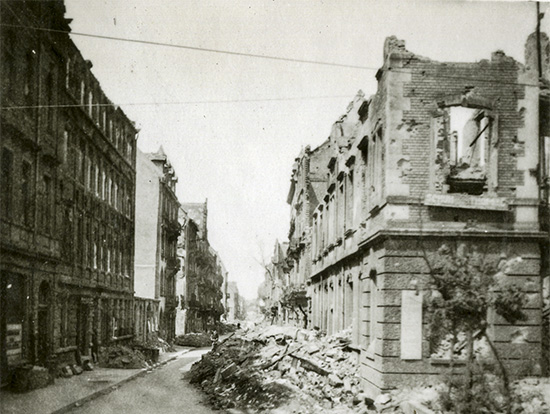 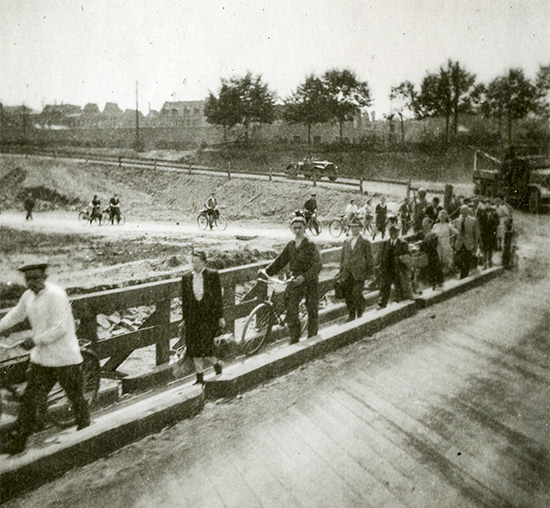 Despite the destruction of their city, the people of Mannheim are doing their best to get back to normal — as noted in the excerpt (below) from the journal of Dr. Philip Westdahl. 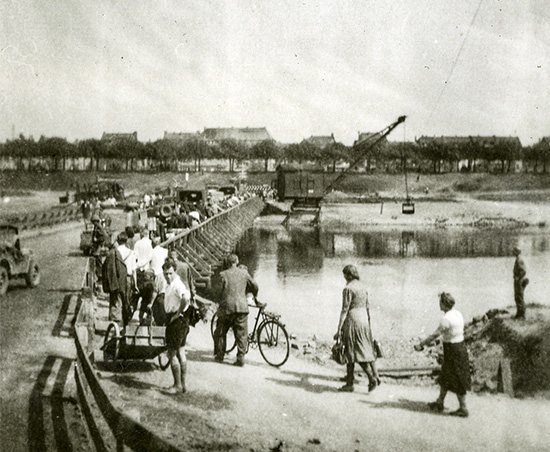 Here are some observations Dr. Phil Westdahl noted in his journal about Mannheim and some other German cities,

“One or two occasions I had an opportunity to pass through the German cities of Worms, Ludwigshafen, Frankenthal and Mannheim. All of them lay in ruins worse than Saarbrucken in many areas. I drove through mile after mile of city streets in which not one building was inhabitable. And yet, already there was evidence of German enterprise. The streets and sidewalks were clean and the bricks and rubble neatly piled out of the way. Here and there men were already piecing their homes together brick by brick. I couldn’t help but admire and respect such ambition. What a contrast to the apathetic indifference and filth of Sicilians and Italians. I doubt if Palermo today is much different than when we left it almost a year ago.

It was quite ironic to see the German propaganda signs painted on what few walls remained standing. Such slogans as ‘Glauben, Arbeiten, Kampfen!’ (believe, work, fight), and ‘Sieg, Oder Siberien’ (victory or Siberia), and ‘Sieg ist Unserer’ (Victory is ours) were displayed in large painted letters.”