No letter from René on September 16, 1944. Here’s an excerpt from the journal of Dr. Philip Westdahl, remembering various experiences with the local people of Carpentras.

Every evening, and particularly on Sunday, [French civilians] would come by the hundreds, men, women and children, leisurely strolling or riding about the hospital grounds. They were extremely curious and the surgical tent in particular was continually the center ring in this great circus. All evening long as many heads as possible would be peeping through the flaps of the surgical tent. This became so universal that we soon found them in our living room quarters and it became difficult to even visit the latrine without an audience.

In spite of it all they were so genuinely friendly and generous we didn’t feel that they were in the way. After a group of them had visited a ward, the ward table would be piled high with grapes and melons. This was their way of showing how grateful they were for their liberation. I often wondered what their reaction would have been had they known that many of our patients were Germans.

Before leaving Carpentras, we had the good fortune to be invited to many of the French homes for dinner and an evening of pleasant and interesting discussion about the conditions in France during the German occupation. Dinner always consisted of abundant vegetables and fruits, mostly such things as tomatoes, eggplant, potatoes, string beans, melons, grapes, figs and apples. A few families had eggs and some raised rabbits enough to afford a meat course.

Their bread was quite dark, made chiefly from corn, sometimes using the entire stalk. They were amazed at our wonderful white bread and ate it gingerly as if it were precious cake. Their coffee was made from charred barley kernels, not too bad to drink but almost sickening for a steady diet. They had absolutely no butter or meat, and milk was strictly rationed so that children barely had a pint a day.

Soap was of a very poor grade – a heavy, sandy, dark gray cake about 3-cubic inches, which was to suffice a family of four for 1 month; this included personal, clothing and dish washing. They went into ecstasy over a bar of our face soap, which we brought as a present in return for their generous hospitality.

On one memorable occasion, Col. Mathewson, Chuck Schwartz and myself were royally entertained by the mayor of a small, nearby town. He made quite a ceremony of our presence, even to the extent of composing a very touching toast over a bottle of choice champagne saved especially for this day of liberation: We were the Liberators. 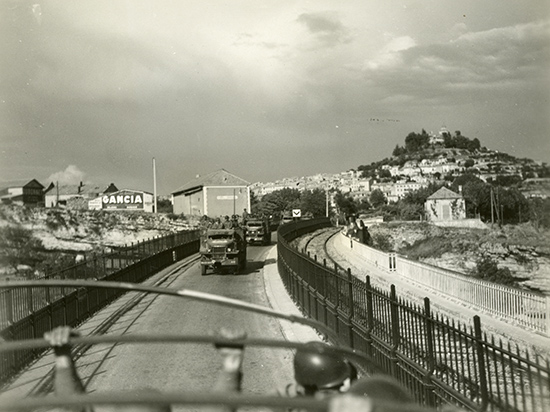