Everything is, as usual, a mass of confusion around here. We have now been brought up to strength as far as enlisted personnel are concerned. We received some 40 men from the 91st and then 140 from the 2nd Armored Div. We were supposed to have gotten some of the nurses from the 91st transferred to us, but as yet those orders have not come thru. Then, today we got 5 new officers, two captains and three Lt. Cols. Strange business!! A couple of these new men were former 11th Evac members (one of the oldies from Africa, etc.) but all 5 came to us just now from the 115th Evac. Apparently one of the Lt. Cols will be taking over command of the unit, tho’ even that, as yet, we are not at all sure of.

As you see, or can imagine as well as we can, something is in the wind, and it looks as if they may be really beginning to commence to think about sending us home before many months elapse.  Even, however, if we do leave this area it will mean two or three months before we actually get off the continent, because there are always hold-ups for various lengths of time in the “Assembly Area,” and then again at the “Staging Area.”  Witness the fact that the 45th Division started home the end of June and are still sweating it out at a port.

Incidentally, the difference between an “Assembly” and a “Staging” area is that the “Staging Area” is at the port, whereas the “Assembly Area” is somewhere in the heart of France – either Rheims, Metz, or near Paris. If we leave here, we will undoubtedly have to go thru both types of “Areas.” So, even if you get word not to send any more mail this-a-way, don’t get high hopes, for it will only mean that we are on the first leg of that centipede — that journey home. Rather than have mail take a few weeks to catch up to a gang at the various areas, they are encouraging all to have those that write informed that we can do without mail for a couple of months. In other words, by the time you get the notification not to write anymore, we will have been on the way already about two weeks. So, if you had just written the day before, there will actually be 4 weeks of mail following us.

Will try and let you know if and when we do start, what is going on – that is, as much as we will know about it. Perhaps I’m a bit optimistic in even mentioning all this at this time, but something is in the breeze and we hope it is what we suspect. But, even so, we know that the Army can do and undo things so darned rapidly that even if we do get orders to start on our way, we will not believe anything about it until we see those shores of the U.S.A. People have had orders written and rescinded so rapidly over here that it makes ones hair curl, so, even if we do start on our way, for cryin’ out loud, don’t go getting’ high hopes of an early return.

Enough of that optimism… Could it all be the result of the party we had last nite?? Yes, we had a pretty good shin-dig last nite, using the dining-room of the hotel as a dance-floor. Had a 5-piece band made up of some of the men of the 91st Evac (the men having formerly been of the 97th Evac). It was a party given by those of us in the 108th — with the 91st members as guests. Kind of a funny mix-up to say the least. Here we are sort of guests of the 91st and we give a party with their band, their dining room and the only thing ours was the liquor, which had been made into a rather good punch.

I had quite a nice hike with Chappie yesterday.  We set out after lunch and took off through the woods and ended up on the highest peak around here.  Actually, it wasn’t terribly high, but it was practically a straight-up climb and we had a swell view from the top.  When we started down, we took a more circuitous route, a narrow road that led from the top down, and we ended up walking quite a ways by the time we landed back in town.

Mom, your encounter with Bret was certainly a smarty. Am surprised that he does not apparently have all the latest dope on the gang, whereas we, over here, have heard some more definite news than he gave you. We know definitely Brown and Stratte are civilians and we heard that Wally and Frank were getting out, and should by now be out. 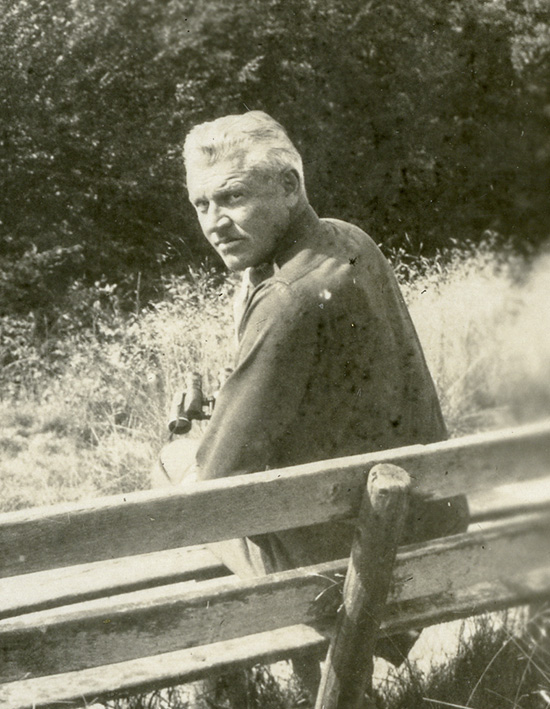 René tells his parents that he went on “quite a nice hike with Chappie” – Elmer Chappell. 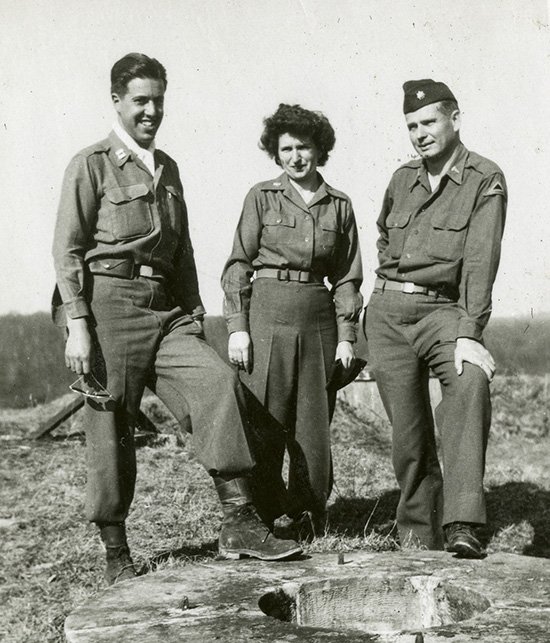