Pete got sick with ?? what about a week ago and just now walked in the door. The night I got here Paul was assisting Gerbode in place of Pete, but that very nite he came down with the usual “runs” and so I went to work as Gerbode’s assistant. Paul is also well as of tonite so do not know what the new regime will be. I may continue helping Frank, as we have enlisted the aid of others as anesthetists. Malone is now giving them instead of Chappie and we are supposedly getting someone from another outfit that is as yet not working, to give anesthetics also. Well, we all asked for it and we really have gotten it. I’m working the noon to midnight shift—sleep till about 8am and then work in the ward till time to go to work at noon. Of course, the difficulties come when we get a long case shortly before midnight and it goes on for a while. But, I’ve enjoyed it a lot despite the fact that when we hit the hay, we really hit it!

When we got done with our last spot it was really a mess!  We had to have a bull-dozer to pull out every one of the trucks that came in to take our stuff out.  It was a chewed up mess and the fact that it continued to rain while loading really made things pleasant!!!  I was left in charge of the “rear” this time, and the Col. and Collie leaving Vallar and me the day after the rest had gone.

Have a better deal than Sicily now and I take back a good bit of what I said about buildings. Steam heat, running water (mostly cold, but O.K.) and big, regular cooking stoves (coal burning) for the messes, tremendous pots as in the St. Francis Hotel or others of similar caliber. Set-up much like San Francisco Hospital.  Only thing that is a bit small is the Surgery, where two of the rooms are a bit cramped with two tables in them — you see, we use two tables per team so each team has its own room.

Eddie Welles being in the 1st Echelon did a nice job of picking out a good room for the four of us — Serge Bryner, Vallar, Welles, and me. Have one room for sleeping and one for sitting, writing, reading, etc.  It is ideal, particularly since we all go to sleep at different times and we can close the door to the sleeping room and sleep perfectly well without being disturbed when someone else gets up and dresses to go to work.  Eddie is on the opposite shift from me and we meet each other just coming and going. It’s a second-floor, steam-heated room with a bathroom (with bath) and toilet between our suite and the room that Chappie and Schmitz have.  Really mighty classy, eh what?

Bob Jones has left – his transfer came through and so did Morduant. Jack Dunlap got his 1st Lts.

Oh, yes, spoke to Base Censor friend today and find my letter to French folks was illegal, but can write postals, so shall do so pronto, if not sooner. 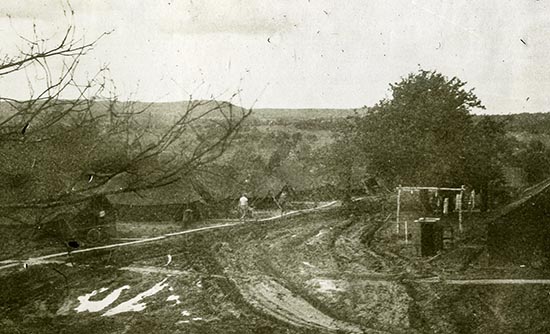 René tells that when they got done with their “last spot” (Rioz) “it was a real mess!” 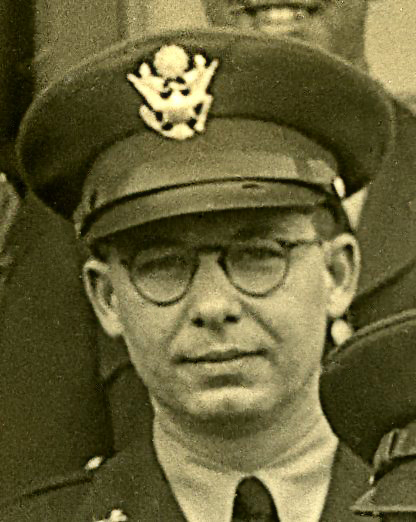 Pete Joseph has been ill for a week and Paul Stratte just got “the runs,” so René worked as Frank Gerbode’s (above) assistant in surgery. 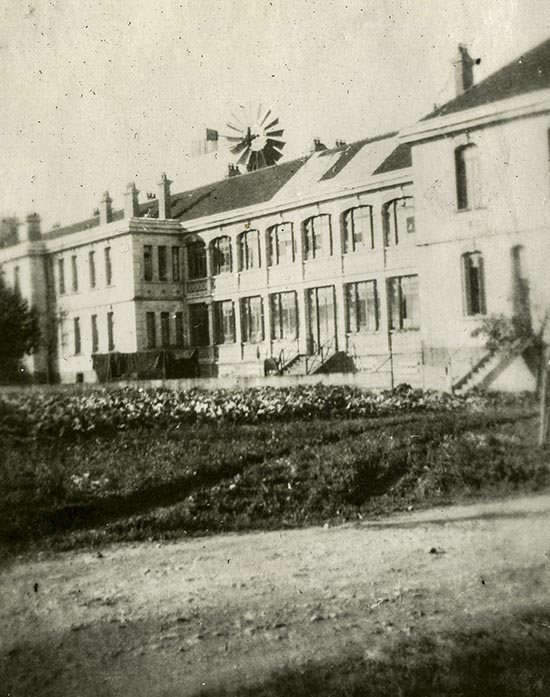 Now that they are in Epinal, they are back in buildings…like in Sicily.