No letter from René on November 2. Here’s an excerpt from the journal of Dr. Philip Westdahl, reflecting about their time in Epinal, France.

[During October] we have been going quite steadily. About every other day, following a drive, our receiving and shock wards pile up with a backlog of 80-90 patients, requiring a bout 24-36 hours of continuous operating. Just at the point where we begin to see the last few patients remaining in the preoperating ward, another onslaught would arrive.

Operating time naturally varies considerably with the type of injury. Some cases, such as shell fragment or bullet wounds in the soft tissue of extremities, may require only 10-15 minutes. Others, such as compound fractures, particularly of femurs where extensive debridement and cast is required, may run into 2 hours or more. Major chest, abdomen and brain cases may take all of three hours. All in all, the average two-man surgical team does about 15 cases in a 12-hour period. We have had 7 such teams, 4 working from noon till midnight or shortly thereafter, and 3 from midnight to noon. This affords an opportunity for the surgeons to see the patients on the wards, change dressings, etc. and catch up on a little sleep during their off-period. During our really busy spells 4 to 5 hours sleep is considered a luxury. Washing clothes, letter writing and reading lag considerably behind.

The fighting in the Epinal sector proved to be slow and rugged, due to a combination of bad weather, wooded and mountainous terrain, stiffened German resistance, and. last but not least, the exhaustion of the boys remaining from the three divisions who had made the landing in southern France.These boys were completely worn out when they came to us. To many of them a wound was a God-sent ticket to a good and well-deserved rest, and how they did appreciate the warmth and comfort of a warm hospital building and a simple army cot with adequate blankets.

The actual type of battle ranged from hand-to-hand or close, small arms and grenade fighting with the “Krauts” in the woods…to long range artillery duels that produced multiple shell fragment wounds. “Tree bursts” were again frequent and we had several brain cases with depressed skull fracture. Major vessel injuries were frequent also.

Too much cannot be said for the treatment our patients received in our shock ward, which was also pre-oper. ward. Coming in exhausted, in pain and in shock, they are given sedation, blood and plasma and penicillin, so that by the time they reach surgery every one of them is a good operative risk. Furthermore, the initial cleaning and shaving of the wound area has saved valuable time in the operating room. 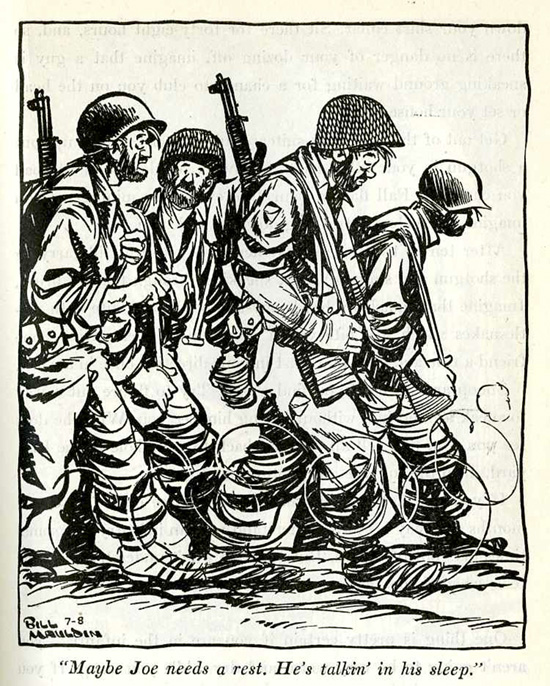 Phil Westdahl remarked that for some of the soldiers, “a wound was a God-sent ticket to a good and well-deserved rest.”