Numerous packages arrived the other day – packages that apparently were mailed after the glasses you got me. These, of course, were Xmas packages and I’m amazed that they arrived so quickly. Have not as yet opened them, but wonder if they will really keep till Xmas. We’re getting awfully itchy fingers.

Have kept plenty busy of late. In fact, I think that the two busiest departments have been ours and Lois’s. There have been a lot of interesting intra-hospital problems cropping up all the time to give someone a headache and somehow a lot of them fall on us in the dispensary, such as the question of giving shots, etc.

The latest problem was the question of Schick testing the whole gang, which I had to do. Obvious reasons. This, of course, included a great deal of culturing and when the scare became a full-blast one, then men poured in from all over with the same request. It soon got out of hand and became ridiculous to a great extent. The number of cultures as compared to the number of positives was a top heavy ratio and the number of cultures compared to the number of clinical cases was even more top-heavy. Of course, numerous positives were definitely only the oid type, but the poor lab was snowed under for some time. It had to get assistance, but now things are slowed down to a walk. We toxoided all the Schick positives in our gang. Had only one clinical case in our gang – Miss Vencko.

You should have seen our “Charlie Chaplin Production Line” the day we were Schick testing. Fran was the left-arm specialist (control) and I was the right-arm specialist, while the boys kept us supplied with fresh needles. The remarks from the boys as they were attacked from both sides were really funny. But the most common one was, “Gee, with both shooting, I don’t know which one to watch, so I can’t tell if it hurts or not!”

Of course, all this business would occur while the Col. was away. Mattie had his hands full, partly too, because Reilly was rather unreasonable on several things and they went round and round for a while.

Jack Dunlap turned up with a positive throat, but wasn’t ill – however he was stuck in the hospital and I had the problems of the Evacuation Office dumped on me.’Twas quite a job for a few days. For a while I thought I was going to have to buy a pair of skates, because I was running back and forth from the Receiving to the Evacuation office. These offices are at opposite ends of the building and one nice long hall between them. It would be quite a nice skate. 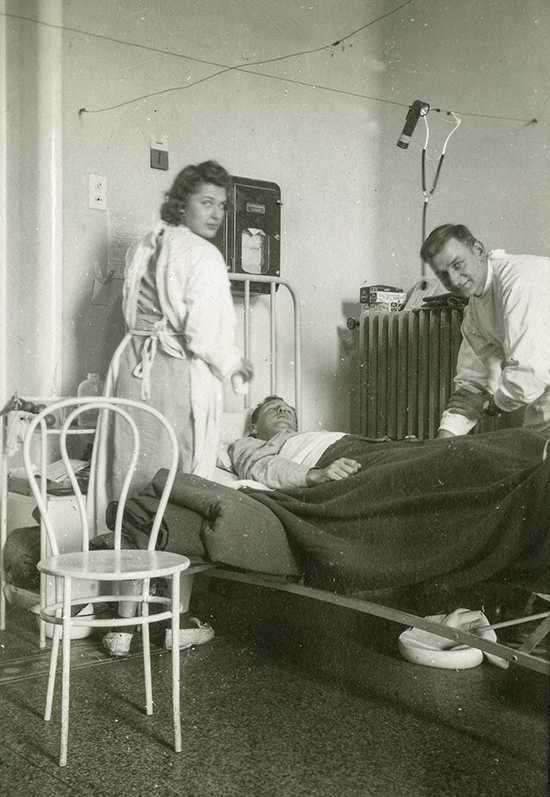 Lois working in the Isolation Ward with Tom Voicheski, who was in charge of the ward. René tells his parents that the two busiest departments have been his and Lois’s. 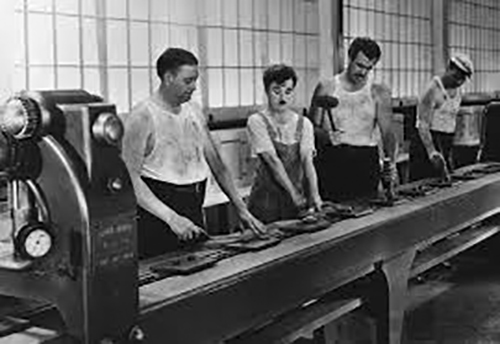 René says that the day they gave everyone in the unit Schick tests – to test for susceptibility to diptheria – they set up a “Charlie Chaplain Production Line” like the one depicted in the film “Modern Times.”