So today is the day which we have all been waiting for so long, and actually now that it has come it sort of is nothing more than an anti-climax and everyone is just sweating out the next few months — the question of whether we stay, whether we go home to stay, whether we go home and go to C.B.I. (China, Burma, India Theater), or whether we go direct to C.B.I. Those questions are the ones upper most in the minds of all the G.I.s over here now. The war is over here, thank God, but what next?  Then, too, the fact that the war has actually been over in this sector for all intents and purposes for a few days makes Churchill’s announcement today (incidentally we all heard his but none seem to have been tuned in for Truman’s) merely a part of the ceremony, and the signal for the rejoicing that had apparently already begun in New York and other similar spots. Now we sit and wonder what next?

The French cooks who are still with us knew what to do — they hoisted a French flag over their quarters in celebration of V-E day!

The last few days I’ve continued to be on the road most of the time, but today took a day of rest – and, in fact, today was the second warm day we had had in a couple of weeks of chilliness. In fact, it was almost too hot today!  This country is really pretty and interesting to ride through.  But, perhaps one should reserve judgment on the two big rivers until one sees them near their outlet, for both the Rhine and the Danube have been disappointments to me as far as size is concerned. The American has the Danube beat at least where I’ve seen the latter. And, what’s more, I’ll be darned if the Danube is “blue”. It’s green!!

One of the interesting things I’ve seen was on one of the super-highways where a lot of wrecked German fighter-planes can be noted along its edge in the trees.  Then, as one goes on a little further, the dividing section of grass stops and becomes merely a green-painted section down the middle, and one realizes that that strip had been used for a landing field for these planes.  I don’t see how such a spot could be noted from the air. These Krauts were mighty smart at the game of war, there’s no getting around it.  I’ve seen a lot of their tentage and other items of late and even in those items they had it over us in many ways.  I believe that our actual tent material is probably better than theirs, but their tents are more convenient, their tent pins are less breakable, and they have a lot of little fancy things that are time-savers and equipment-savers.  But, then, they were building for war a long time before we were, and for these items we merely fell back on the old 1918 models, and only invented new things when we were forced to by military necessity, particularly in planes, etc.

Another thing you’ve got to hand to the Krauts — they’ve done things systematically; their towns are well built; the settlements around the factories (i.e. the factory workers’ homes) are well-planned, clean, and there are small parks for each group — you know the type of thing we’ve been very late in doing.  As someone was saying today, from the time we landed overseas we sort of started at the bottom of the ladder and worked up — the Arabs were just a bit worse than the Sicilians, Italy was an improvement, France a great improvement, but the Germans have it all over the French towns and cities for cleanliness, etc.  Their towns do not stay full of rubble in the street for long.  Even those towns that have only recently been damaged are cleared well — the streets are swept clean of rubble, and, in lots of places if one did not look closely thru the windowless openings of the buildings that seem to be still standing, one would not realize that these buildings were only shells and that there was nothing but a pile of rocks inside. I would be interested in seeing Holland or Denmark for just that reason – they are supposed to be the cleanest, and most fastidious of all… 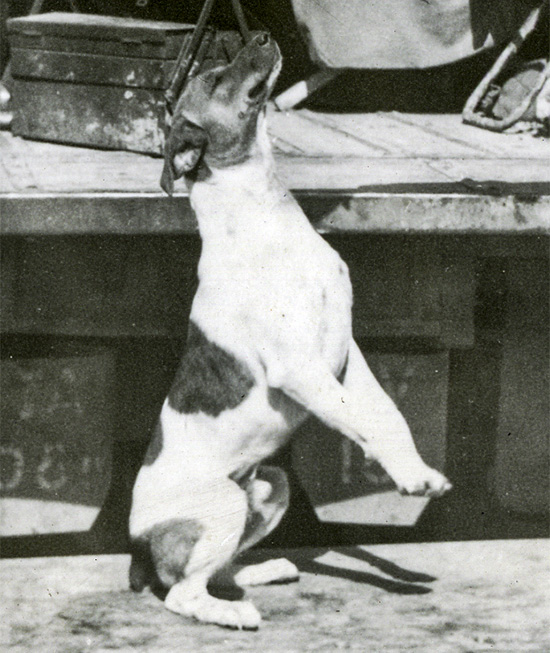 Stubby, one of the 59th Evac. Unit’s resident dogs — maybe jumping for joy at the news of V-E Day! 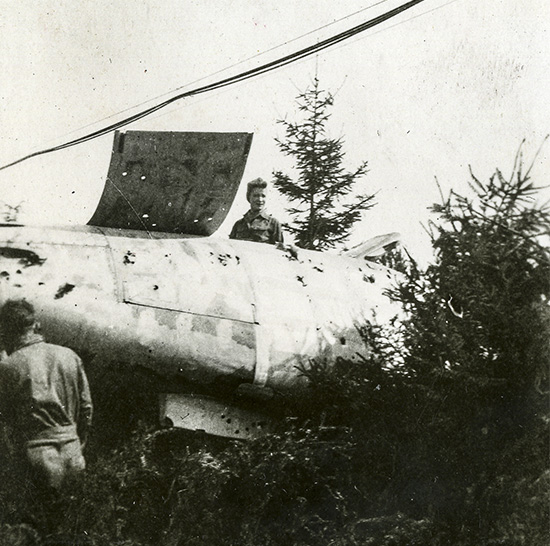 René comments, “One of the interesting things I’ve seen was on one of the super-highways where a lot of wrecked German fighter-planes can be noted along its edge in the trees. Then as one goes on a little further, the dividing section of grass stops and becomes merely a green-painted section down the middle, and one realizes that that strip had been used for a landing field for these planes. I don’t see how such a spot could be noted from the air.”
Above, Louise Moon poses in one of those wrecked German fighter-planes in the trees along the autobahn. Below (left to right), Louise, along with George Armanini, Chris Coletti and Louis Huff, pose in front. 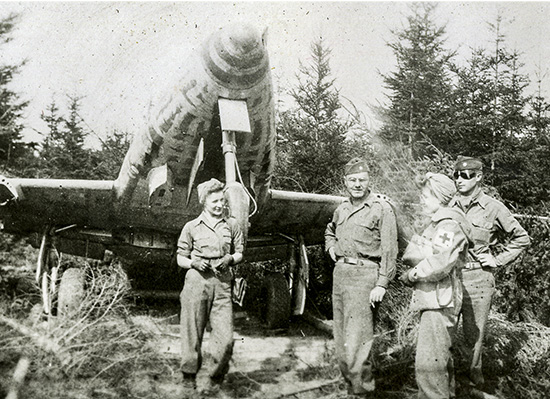