Here – on May 7, 1945 – are some reflections from Dr. Philip Westdahl about awaiting the formal end to the War in Europe.

The BBC told of the plans being made in London to celebrate the great announcement — the ringing of bells, the blaring of sirens and the gleam of searchlights. Such celebrations would be taking place in our own country and in France and Russia and many other parts of the world.

Here in Germany it would be a far different occasion. The civilians would go about their daily routine, those in the country tilling their soil, those in the cities patiently clearing the rubble in an attempt to reconstruct their homes and their lives. The war was over for them when the front had passed on beyond them, when they no longer had to live in constant fear of bombing and shelling. And yet, in another sense, the war would not be over for them for years to come.

For those American and Allied soldiers who were still fighting, it would be a great moment. No more living in water-filled foxholes, not knowing from one minute to the next if the next shell might have their name on it. But I’m sure that their initial elation and relief would soon give way to that impatient longing to be home again.

The war was over for those of us in the 59th Hospital. We had seen our last casualties of this European war. [As he wrote this, Dr. Westdahl didn’t anticipate that the unit’s next location would be Dachau.] But as we waited in that marshy field in Heidenheim for the news that would bring joy to millions, there was an understandable apathy in our hearts, which I am sure was shared by millions of other men overseas. The day after cessation of fighting would be just another day overseas, and so would every day until that long-awaited news arrived telling us that we were to go home. That would be our day to celebrate! That would be the end of the European war for us. All of us realized our responsibility in the Japanese war and in the occupation of Germany, but we felt we had done our share, at least for the present. After 30 months overseas, we felt deserving of a chance to see our families and friends. 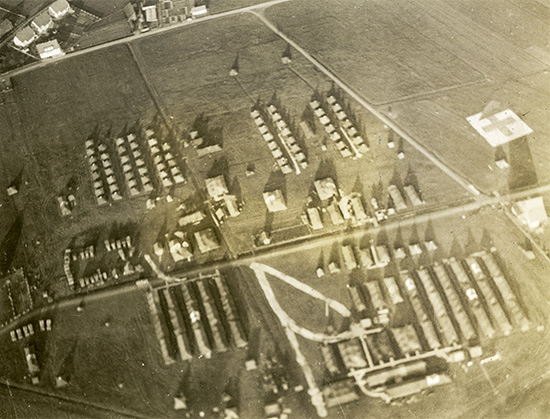 Philip Westdahl reflects on “waiting in that marshy field in Heidenheim” for news of the end of the War in Europe. The photo above is an aerial image of the 59th Evac. Unit’s tents in Heidenheim.