I’m Medical O.D. today so have to stick around and it has been most boring. Have caught up on all my reading and nothing else is handy.

The baseball game the other afternoon was really a good one. Wy played his first game since wrecking his knee and he pitched, pitching a swell game. In fact, he put those balls in so fast that poor Joe Plummer who caught for him has had a sore and swollen hand ever since.

Yesterday in the P.M. went to the beach and stayed out longer than the rest for Cy Kiernan and I were invited over to the beach club run by the Headquarters gang from town, including Bob Loeb.

You know, it is funny the number of people we have met who have become convinced that after the war they are going to go out to California and probably settle there. Bob (who is from Charleston, West Virginia) feels that way and Cy Kiernan (from New Jersey) says that he is going to have to move to California out of self-defense because all of his friends will be there.

I got a letter from Alain yesterday who says that Ilse thinks that the places we’ve been in here in Sicily are very beautiful and that she likes it even better than the Riviera. Where she gets these ideas I know not?? 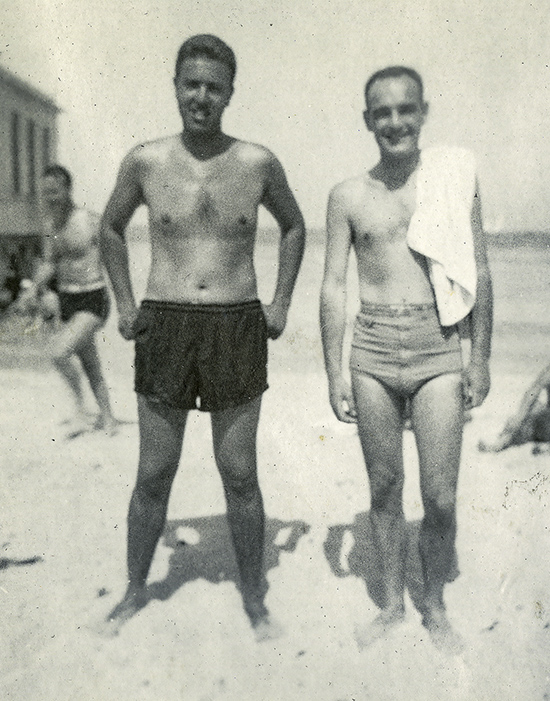 René and Cy Kiernan at the beach. 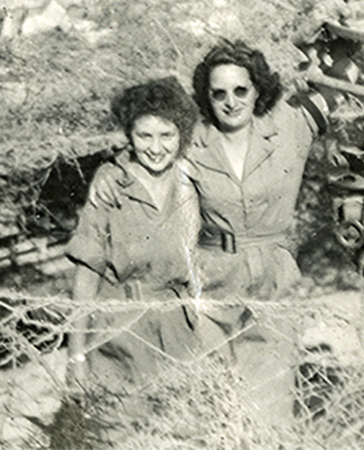 While the doctors were playing baseball and going to the beach, nurses Gert Brazil (on the right in the photo above) and Marion Switzer (on the left) went on an adventure.

Gert told the story years later: “Marion and I were given a week’s leave and we were supposed to be in North Africa on leave. Instead, all of the action was in Italy and we wanted to go see some action, because we hadn’t seen very much.

Marion said she knew of a Colonel who was running a hotel in Naples, Italy. So, we bummed a ride and got over there. I was scared, because I had never done anything like that — I usually went by the book. But Marion was a darling; she was quite a gal. We would go out to dinner some place and every day was her birthday, so we had to celebrate and sing happy birthday to her.

We finally got to this hotel in Naples. It was a big old place. We stayed there and, of course, there was an air raid that very night. I was worried that if we got bombed out there, no one would know where we were and it would be a real mess.”