It’s good to be working again!  We’ve been plenty busy, are tenting it once again and enjoying it.  Of course, we are still forced to keep our long woolens on for, even with our oil-burning stoves, things are a bit cool.  The first nite in the surgery tent was really a dilly!  Around 3 A.M. it really got frosty inside and everyone was working like mad primarily to keep warm.

The “Gang-Greene” is once again functioning as usual, that is, missing or at least getting to meals late. The only meals we’ve gotten to on time are those that are served before we go on shift, that is, breakfast. Why does it always happen to us? And, of course, too, we never get off at the supposed 8 P.M. shift time. A couple of nites ago Mattie stuck us with a longie and had to start it at 7:30 P.M. We could have throttled him, but actually we were so glad to be working again that it didn’t bother us as much as it would have a few months ago, when we were on the tail end of our working period.

At present Helen Baker (one of our anesthetists) is on leave in England. She has some relatives there and when the unit became eligible for someone to go to England on that 7-day leave business, she was given the opportunity. Gert Brazil is on her 2-dayer in Paris, and as a consequence, we are a bit short on anesthetists at the moment. Schmitty, having little dental work as yet is filling in for Helen. (Gert is still in the learning stage.)

Have two new officers, Capt. Baldwin and Capt. Stokes. The former is a Medical Officer who, however, used to give a lot of anesthesias before coming into the Army. He has been, before coming to us, Medical officer for some Ack-Ack outfit. Stokes came from some General Hospital in England, I believe, and he is a surgeon. They both just joined us a few days ago, so don’t know more than that about them.

I’m living with Gil Bishop and Jack Dunlap and we happen to be lucky in that there are only three in our tent, whereas most of the others have four.  It gives us enough room for a decent table, on which I am now typing.  Gil, coming up in the command car with a trailer, managed to cart along quite a bit of extra stuff that has served to make the tent more comfortable and convenient.

We’re on quite a little rise and we hope that when it starts raining, if it does, and it probably will, that we won’t be washed down into the flats.  The engineer did a nice job of putting in a couple of main roads, blasting a sump pit, and a few other things. Will be taking some pictures when the sun deigns to come out.

We’ve been getting nothing but the big stuff since we opened up, the little stuff being sent to some other gang —  I think to the bunch I was with in August.  Since we’ve been opened and until this morning, we’ve been so busy that we haven’t had much time to find out things and the only thing that awakens us at night is the cold.  The noise that has been almost constant day and night hasn’t phased us a bit.

Had a mighty interesting time one night — the night I spent with Bill Reiss, as I was up to his spot on PX business for Fadley.  Bill is in a radar gang and I got to see their center where they can follow the planes over the map – moving miniatures along as the planes are known to move from area to area.  The place looked something like a stock-exchange plus this big central, flat map.  I was there some time after the big show started and things were really as wild as a stock-exchange on its busiest day.  Some time I’ll be able to tell you more about it all.

Ann Dunn darn near went wild with joy yesterday, for she got a cable from her Mom that her brother was safe – they had had a letter from him from a prison camp! Gee, everyone was so happy for her. Ann was a good friend of Lois’ from Fort Ord.


René took photographs of how their special surgery tent was put up at St. Avold, France and added captions to each one. 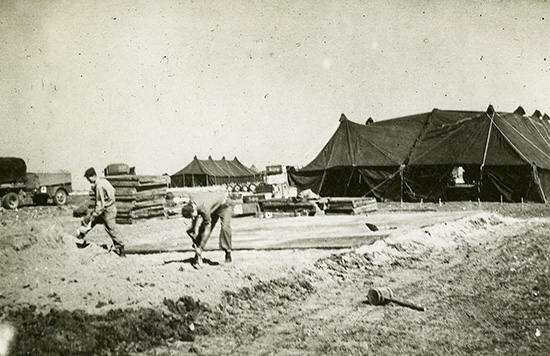 First step – smoothing terrain so flooring can be level. 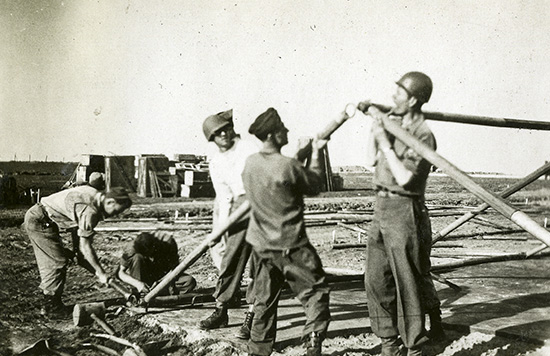 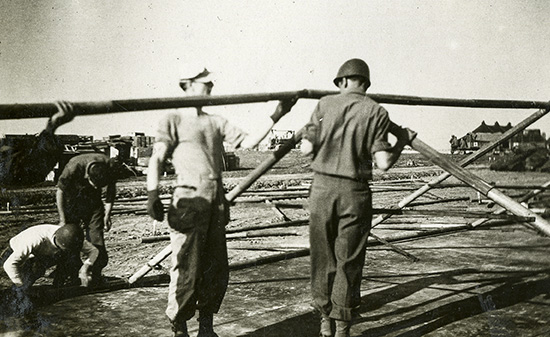 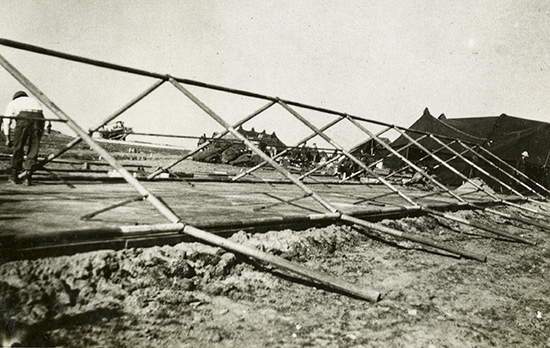 Fourth – Ready to have canvas sections fitted and laced together over supports. 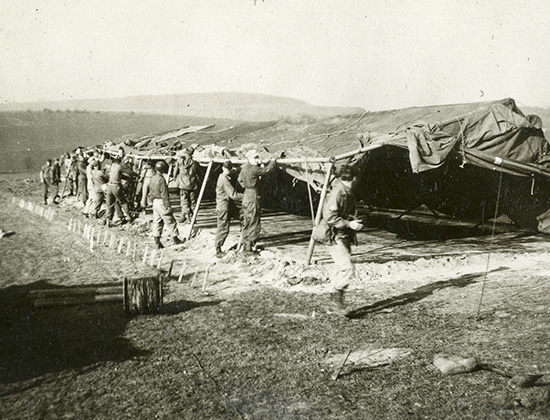 Surgery tent going up – one side lifted at a time.