Hal Williams & Pete Joseph finally arrived home after being almost 1 week AWOL. They had an even tougher time getting home than had Gil Bishop and Bob Treadwell. They got to Cairo alright, but it was just about then that things clamped down and one had to have tickets and priorities, etc. to make the grade. Well, just being on leave they didn’t have much of a chance and then, too, the weather wasn’t too wonderful and they had a tough time getting out and on their way back here. They landed at a spot considerably farther west than Sicily, in Africa, and had to wend their way back this way again. Finally, they did land in Italy and at last on the Island, but on the other side of the Island. From there they took the train back. Hal said that he’s sticking to the ground from now on. The train ride was apparently very good, very comfortable and relatively fast.

George Davis left a few days ago, but probably will return again in another month or so, as his job will keep him traveling. I might go up and visit him on my leave – I know not.

We now have a new roommate — Capt David Waugh. Chaplain Daib traded places with him, as Waugh was living upstairs and he has a bum knee that supposedly hurts him too much to keep walking upstairs. Bret Smart, however, says that’s hooey — for Bret wanted him to do even more exercising than he had been doing — but no, instead, Waugh wanted to move down. Daib agreed to move up, but without consulting us. For now we are all mad at him (not because Waugh moved in, for he is O.K.) but because now we have no one to wake us up in the morning.

It is bad — our two rooms — one with Blaisdel, Johnson and Stola, and Jack and I, had a hard enough time getting up in the A.M., even with the Padre there to prod us until we had to get out of bed, but now with him gone, we are in a sorry state. As a consequence, we are going to picket his Sunday services and Stola is going to be our preacher. This morning’s picketing the Padre wants us to keep up — he had 15 new members in his congregation today — he likes this picketing idea!! But truly, we are sorry he moved upstairs, for he was loads of fun to have in the room at all times.

Yesterday we heard a most interesting talk on Typhus, given by one of the men who has done most of the work over in this region, Africa and Italy. We met and knew him when first in Africa and he did a lot of his work at the so-called “Pest House,” which we visited there.

The high points of his talk were: (1) The typhus vaccine is definitely effective – there have only been something like 5 or 6 cases in American soldiers and these have been very mild without rash in 50% of them. (2) There is no specific therapy at all – only good supportive care with adequate fluids, good nursing care, etc. Sulfa and Penicillin are not effective. (3)We now have an effective de-louser and de-mosquitoer.

There are now plans a-foot for a celebration on April 6th – tho’ I think it is actually going to be on the 8th – our second Anniversary of the Unit. 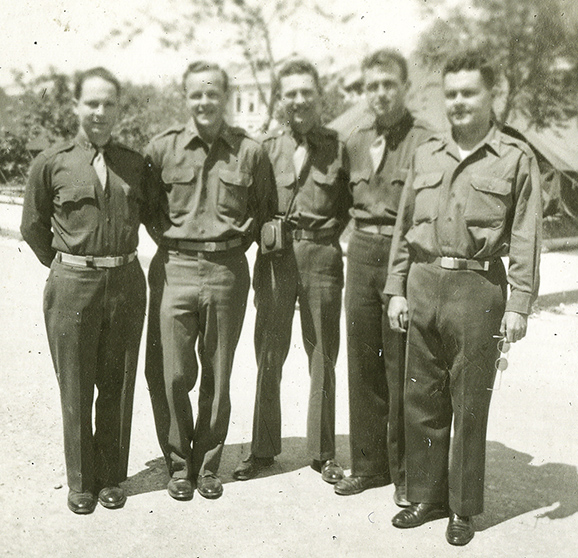 René tells his parents that Hal Williams (pictured in the middle) and Pete Joseph (pictured far left) finally arrived home after being AWOL for almost a week — trying to get “home” from leave in Cairo.  Also in the photo are Paul Stratte (second from the left), Bill Newsom (second from the right) and Bill Kuzell (far right).