No letter from René on March 14, 1945. Here’s an excerpt from the journal of Dr. Philip Westdahl, describing his visit to Paris earlier in the month.

[In early March] I had the grand opportunity to see the famous city. Although it couldn’t actually be described as beautiful at this time of year with its barren trees and blackout, it is easy to see why “Paris in the spring” would be one of the most beautiful cities in the world.

Paris at night lives up to its gay reputation with its riské Follies Bergere and Cassinade Paris, where the most beautiful scenery and costumes I have ever seen vie with the casual nudity of the female cast for the center of attention, the latter taking the lead at the start, but the former holding its own at the finish. Aside form the shows, there are the ever-present taxi-girls who ply their trade, aided by the blackout, and strangely enough with a finesse that is so casual as to seem entirely acceptable, even to a stranger in Paris.

In addition to all these familiar Parisian highlights, one could discern the unmistakable effect of the war: soldiers roaming the streets, filling the shows and bars and subways, are the only ones who appear to be spending any money. Civilians going about their business with unsmiling faces, men in drab and worn clothes; women doing their utmost to maintain their reputation as the best-dressed in the world with their fancy hairdos and fantastic hats, make-up and perfume a little more than discreet. One is impressed with the small stature of the Parisians, a reflection of their tremendous sacrifice of the flower of their youth in former wars.

A description of Paris would not be complete without mentioning the ubiquitous and familiar sidewalk urinals. Startled at first by such casualness, I soon found myself using them when urgency overcame modesty.

And last but not least of the familiar aspects is the Parisian cabby. It is worth one’s life to ride in or attempt to cross the street when a cab is on the loose. With throttle down and horn tooting, it’s every man for himself. 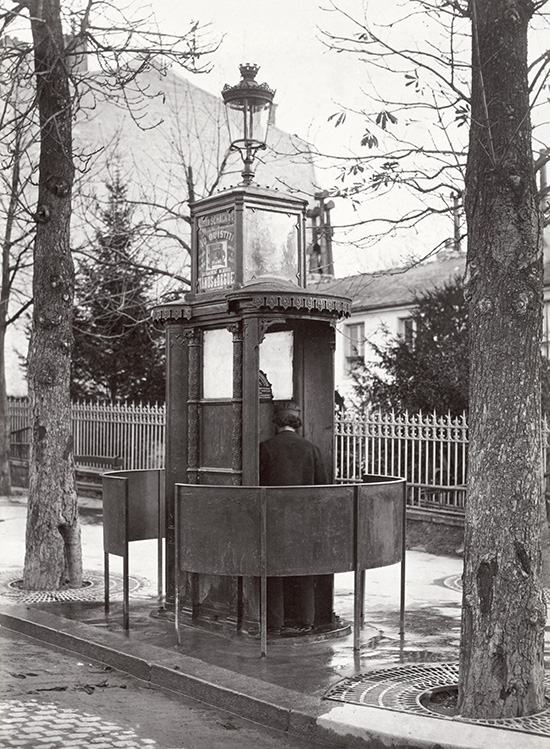 Phil Westdahl was at first startled and then grateful for the ubiquitous Parisian urinals — perhaps one like this.