No letter from René on March 15, 1945. Here’s an excerpt from the journal of Dr. Philip Westdahl, describing his visit to the grave of his brother, Dick, in Normandy.

Before returning to duty I had the good fortune of being able to fly to Normandy to visit my brother Dick’s grave. The flight from Paris to Cherbourg took us over many of the recent battlefields and the destruction of small villages, towns, bridges and railroads and airports could be plainly seen from the air. Actually the evidence, unmistakably visible, did not speak well for our so-called “pin-point bombing.”

Along the channel coast, we could see the concrete implacements and the spike-like obstacles, the latter plainly visible at the water’s edge during the low tide. I couldn’t help but think of Dick hitting that beach on D-Day, June 6th. Now I wish he were alive to tell us proudly of the part he and his men played. I learned that his division landed near the base of the Cherbourg peninsula.

Dick’s cemetery is one of three American cemeteries in the vicinity of St Mere Eglise. There is an air of impressive dignity about a military cemetery which, when added to the realization of the significance of all those small white crosses in their neat rows, brings a lump to one’s throat.

I can’t begin to describe my feelings as I came to that single grave with its clean white cross and the name Richard F. Westdahl so clearly printed on it in neat black letters. Here was my brother. This was not the meeting we had planned in our letters to each other. All of those happy plans and the plans of our future at home with our families flashed through my mind. I thought of Mom and Susan and Lor and wished they could have been there with me. It was a good feeling to know that I was so close to dear Dick. It was as though he were not alone so far from home and those he loved. I’m sure he must have felt my presence there. For want of something tangible, I touched his dog tag, which was nailed to the cross; he had actually worn that and for the moment it was something that had been a part of him. There is no way in the world of repaying Dick and the thousands of boys who have made such a sacrifice, but before I left his grave I knelt before his cross and prayed that he and his fellow soldiers may not have died in vain.

I really felt hollow and a little sick inside as I left Dick behind and headed back to Cherbourg. Oh Lord, if only he could have come with me. 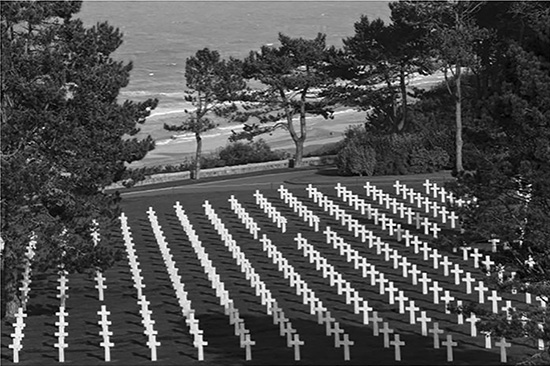 The American Cemetery in Colleville-Sur-Mer, France, where Philip Westdahl went to visit the grave of his brother, Richard Westdahl, who had died on June 13, 1944, as the result of injuries sustained during the D-Day Invasion. 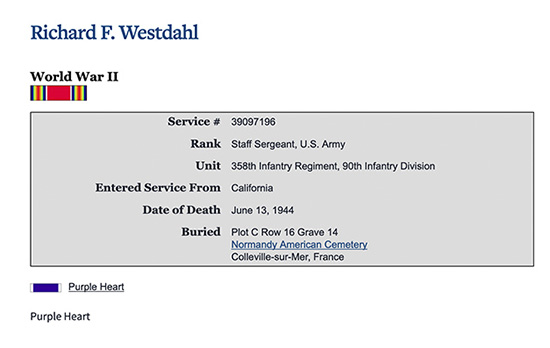