Tonight has been finally set aside for letter writing and I hope that it will actually turn into a letter writing night, instead of all good intentions going to h____ as they have in the past.

I’m thrilled that the mail gets through as well as it has – of course, from time to time a letter shows up that was written a couple of months before, and ‘tis certainly most confusing. But the post offices certainly have a tremendous job and they have done it well, I believe. There is certainly nothing like the mail and mess calls to pep up a gang of men.

I’m sorry to hear that Gram has been ill, but glad that she is on the mend again. I’ve had a ticklish cough for a while – in fact darn near everyone has – probably because of changing weather. One minute sunny and hot as the deuce inside the tents, and then the next minute raining cats and dogs and cold with a chilly wind. Yep, ‘tis a strange country alright.

None of us are taking quinine as yet and I know of no ruling at the moment. We are instituting rather strict mosquito control, sleeping under individual netting, etc., but no medication as prophylactic is being used as yet.

As to the Ghirardelli’s, ‘tis appreciated far more this way than it ever was back home. Besides that, Lois is a pretty good fudge maker. Oh oh, she is sitting beside me, using my typer on some other letters and she just made me admit that it is really more than pretty good. In fact, among the Supply crew she now has quite a reputation, so much so that one of our sergeants has called her on the phone asking for fudge for the 11 P.M. snack in their tent.

You mention listening to the opera and that reminds me that we have some pretty good radio programs over here also – re-broadcasts of Bob Hope, Eddie Cantor, concerts, etc. Sometimes we have radio difficulty, but ordinarily it comes through pretty well.

Since last writing, things have changed a bit around here. We have had to set up a Communicable Ward, and who was more qualified to run it but, yes, me. As a consequence I now have a regular medical ward and two isolation wards. It has been quite a stunt setting up an isolation ward in a tent, but we have managed pretty well. Have a few Liberty or is it now “V” measles cases, a couple of plain measles, a couple of mumps, a typhoid and a meningococcemia.

One of the most interesting cases was a soldier in his twenties who was well until getting off the ship, when he developed a headache, which persisted for 10 days, following which time he entered here showing nothing but a moderately sore throat. He had only a couple of tenths of a degree of fever, however, he soon refused to eat, became pretty unmanageable, getting up out of bed and doing things people should not do in polite society. Then, by golly, he became semi-comatose, would not swallow and wouldn’t answer at all. Spinal revealed 44 cells, mostly lymphs, and a positive Kahn.

He plugged along the same all that day, getting feedings through a stomach tube, and then late that afternoon back came the report from the lab that his spinal Kahn was negative but that his blood Kahn was very strongly positive. Well, rather than wait for a second Kahn on the blood – since I thought the man probably wouldn’t be around much longer – I gave him some Mapharsen right then and there.

The next morning there seemed to be improvement, and by that night, by golly, the guy was semi-conscious again, could see (oh yes, he had a facial paralysis the day the mapharsen was given) and responded somewhat to our talking. Yesterday he was even better. We took out the stomach tube and he took plenty by mouth. Today we could understand some of the things he was saying, he could move around sufficiently and, all in all, he seems to be on the mend. Cause and effect? You tell me!

We’ve had two other strange cases. These two boys were on different wards and turned up with stories most suggestive of perinephric or subdiaphramatic abscesses, with right-upper-quadrant tenderness and palpable masses supposedly, and large livers. Stools completely negative and counts between 10,000 and 20,000. The first was given emetin for no very good reason. Result: cure. The second was operated on and nothing but a large, normal liver found. Got no better, emetin given. Result: cure.

All three of these cases can’t be coincidences, or can they? As Bill Reilly said this morning, we have to give ourselves and the drugs a little credit once in a while. We’re certainly not curing these patients just by ward rounds – or maybe it’s the lack of rounds. 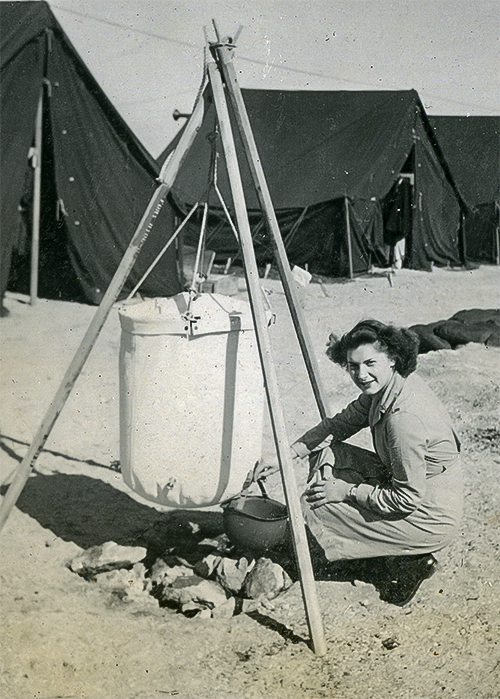 When she’s not caring for patients or washing her clothes (as she’s seen doing here) Lois might be found making delicious fudge to share with various members of the 59th Evac. 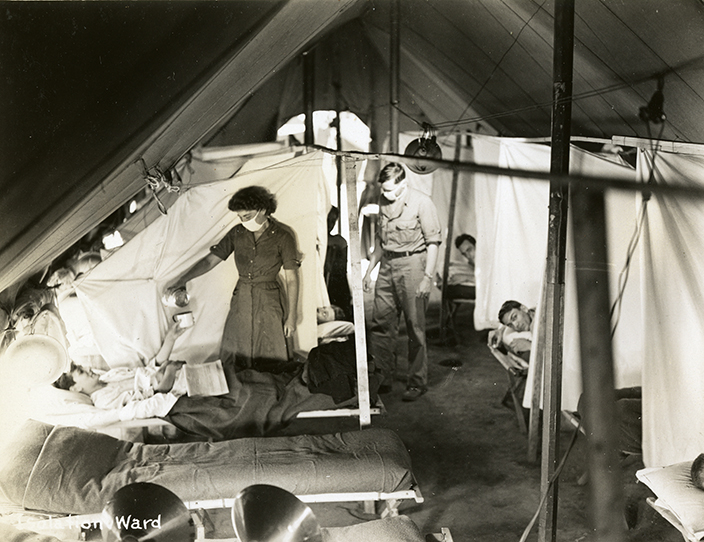 One of the two isolation wards that René is running (caring for patients with communicable diseases) in addition to his regular medical ward.