Golly, an awful lot seems to happen in a few days around here every so often. I got back from Strasbourg night before last already to find some amazing things going on – but again let me annoy you by going at this a little systematically…

I ended my last letter by giving you a few important items, so shall enlarge upon them here.

1) Mattie had a flare up of his prostate trouble while we were still at Dachau and the day before I returned to Heidenheim it had been decided that Mattie should go home via hospital channels. He finally left after we had moved up here, going by air to Paris and then presumably will go home rather rapidly. We were all sorry to see him go, but it certainly meant a lot to him to be able to go home. Then, too, there was the brighter side in that it put everyone’s friend, Wally Greene, in line for his Lt. Colonelcy – however promotions are frozen now, so we do not know if Wally will ever actually get it.

2) On routine exam that we all got when the war was over, to determine whether a man should be kept in, etc., Jim Hamilton was found to have bilateral inguinal hernias. It really wasn’t quite as stupid as all that – he did have symptoms for some time, but they had gotten worse of late and since he was in need of surgery, and no bilateral hernias are to be done in this theater, he too was scheduled for home to the U.S. for the operation. He went along with Mattie.

3) Serge finally got his leave to the U.S. o.k.’d and he took off about the same time as did Mattie and Jim. He, however, will only get 10 days in the U.S. so will be going no further than the east coast. He will be returning back to us. Of course, it may take him a good long time to get home, as he could not get any air transportation authorized.

4) Bert Halter drove up to our front door a few nites ago and, golly, we were ever glad to see him!! He had fineegled to get his C.O.’s Mercedes and came a-hunting us. He looks fine as ever, has gained some weight and is still the same old Bert. He is in the 85th Evac. Hosp.

5) One day, a Capt. Meade showed up in the field across the highway from us (i.e. the baseball field) and asked if I could go down to meet General Wilson (a friend of Lois‘ family) in Munich that afternoon.  Meade had arrived by Piper at about 2 P.M., I had to finish attending to some business I had about Kraut workers, and arrange some things with the Military Government, before I finally was ready to take off.

Meade was waiting here for transportation to come for him from Mannheim and I was to take the plane to fly to Munich to meet the General.  We left here at 3:55PM, stopped at Augsburg for gas and went on to Munich, arriving there at 5:30PM.  It was quite bumpy, despite the fact that it was a rather nice day — it was hot as blazes and the heat pockets made it rough in the air.  After phoning to where Wilson was supposed to be, I found that I had missed him there, so we had to fly on to the other place that Meade told us he would be.

The town was Grunwald, just south of Munich.  And, strangely and confusingly enough, there were two little Piper fields in that town, one on either side of the river, and there didn’t seem to be any intact bridge across the river.  By pure luck we picked the correct field, saw Wilson’s plane at the field and I was able to get a jeep to drive me to General Frederick‘s place from the field.  I walked into Frederick’s place to find him in bathing trunks, and Wilson on the patio talking to Frederick’s friend, a blond nurse from Bam‘s outfit. Found out that, strangely enough, tho’ there is a river close by, Frederick had been swimming in the fish pond, which is about the size of my room at 15-26th Avenue, and only about 5 ft. deep. It had 13 large goldfish in it, too.

The blonde, Linda Lee, had been with the 10th Field Hospital since it was in Africa. I surprised her when introduced, by saying that I knew she was from the 10th Fld. – of course, Bam had told me about Frederick, so it didn’t take any guessing. But then, later, I had my turn to be surprised when Linda’s friend, Rosemary Fink, also from the 10th, and also there at Frederick’s place for supper (as partner for Wilson), called me “Rene”. My first name had not been mentioned at all up to that point, so I was temporarily stopped, but then realized that she was Bam’s roommate and when I had knocked at Bam’s door the day I visited her, and had said ‘twas Rene knocking, Bam had emphasized it with a repetition in loud and surprised voice…


René was called to go meet with General Wilson in Munich and was transported there in a Piper Cub. 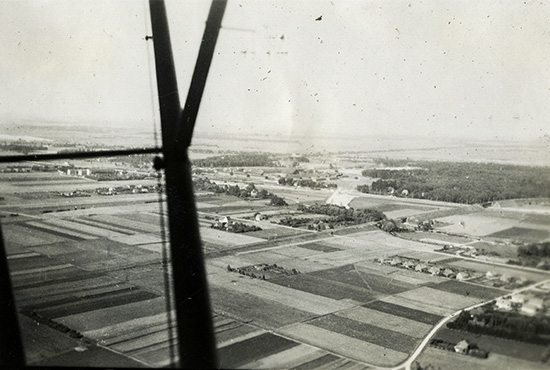 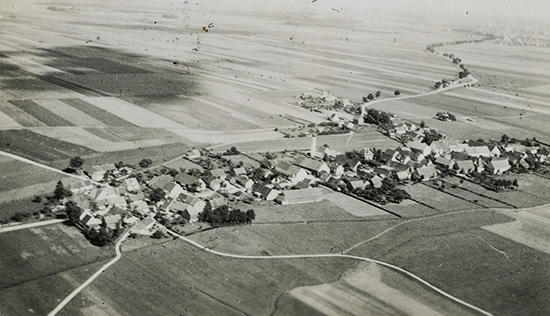 They left Ellwangen at 3:55PM – flying over the German countryside… 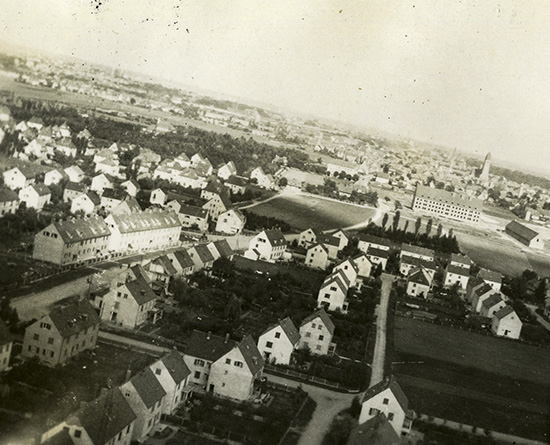 They stopped at Augsburg (pictured above from the air) for gas. 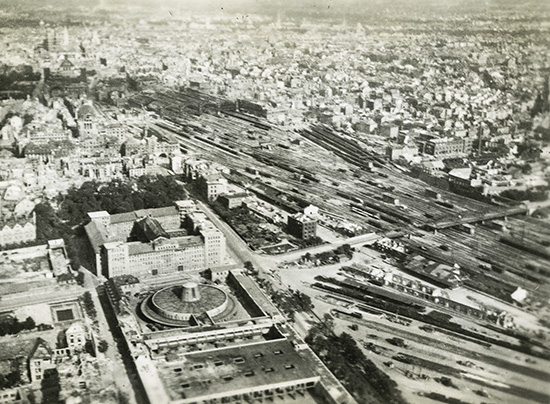 They arrived in Munich at 5:30PM. This is a view of Munich’s railway station, which René noted in his photo caption was a lot more damaged than the aerial photo indicated.