If one takes the time, as one frequently does, one can hear any number of stories about Dachau and other similar places throughout Germany and Poland.  Even with the small amount of German that I know, I’ve listened to tales from Poles, Russians and Yugoslavs, etc. and they all jibe — i.e. the experiences of one prisoner were almost the same as another.

We have one kid who had been used in the freezing experiments and he was one of two that survived out of about 2000 on which the experiment was tried — and that right here in Munich.  He had actually been frozen in ice 7 different times, and had to be chopped out of his ice-block each time.  He’s just a kid about 13 or 14.  One would expect to find various neurological changes in him, but though he has an unsteady gait and odd posture, his reflexes are all normal.

We had another little guy, 16 years old, who has been in concentration camps since the age of 12, who has sort of made himself our mascot.  Whenever we park the little Opel in front of the building and leave it for a few minutes, we come back and find him sitting peacefully inside.  He loves to ride around with us in it and hates to get out when we have to leave the confines of the camp to come to our quarters.  He told us of the march from Buchenwald to Dachau when the American Armies approached Buchenwald.  Thousands made that march in five days  — some 280 km.  Of course there were, too, thousands who started out on that march who never got here.

Another interesting thing brought out in conversations all over is that one of the worst camps was in Poland, and that as far as the Jews were concerned, the Poles treated them far worse than did the Germans.  Strange?  The estimate of many, including a Rabbi, is that of the 4 million Jewish Poles who there were before the war began, there are now less than 50,000 remaining alive!!!!!

Another story — Newsom came out with at supper tonight — was the one told to him by one of his patients.  This patient is an Austrian who is half Scotch and who originally served with the Austrian Embassy in Paris as an Under-Secretary of some sort.  He had been later sent to Spain to get the Catholics there to keep up enough opposition to Franco’s regime to keep Franco from joining the Axis outright.  He believes that they did accomplish that very thing by their efforts.

After that, he had returned to Austria on some mission and was captured, but they did not have enough on him and tho’ they tried to force him to talk, even when they brought him here, he played dumb and they tho’t he must be a moron and so quit the grilling, and let him be just an ordinary prisoner here at Dachau.  Strangely enough, he was able to bribe one of the SS officers, the latter being short of money and in debt; and was able to hold thusly the whip-hand over this officer and made him take him to various places outside the camp from time to time.  He even had him take him to the Swiss border, where he was able to pass on all sorts of information to the British secret agents.  In fact, so he says, a British agent visited Dachau regularly, once a month, and to him was given a great deal of information obtained within these walls — the location of ammunition dumps etc., (the slave labor worked all over the area of Munich) and even the complete plan of the jet-propelled planes.  Also, if something big turned up, all they had to do was put out a special signal by radio and the British Agent would stop up again.

I imagine that you have (by the time this is being written) received the wire I sent when I received the wonderful news from Jeanne.  Her note, dated May 30th, merely said, “Dearest Rene, Just two words to tell you that Yvette just arrived and she is in good condition.  We are so, so happy!  I did not want to wait to advise you.  Hoping to see you soon.  Lots of love, Jeanne.”  What a place this was that nite!!! In addition to my exhilarating news, two of the men got special letters.  Ben Romine (whose brother Mickey was with us from the beginning until he left to join Schuster and the Rangers in the Fall of ’43, and who was later captured at Anzio) got a letter from his sister that Mickey was safe and sound — apparently in the hands of the Russians who liberated him.  And Clint Green got a letter telling him that his kid brother, who recently had an eye injury for which it was touch and go whether he would be able to see or not, had the bandages removed and he was able to see perfectly.  So, you can well imagine how everyone around here felt that nite!!


René and the others are departing soon from Dachau. Here are a few final photos… 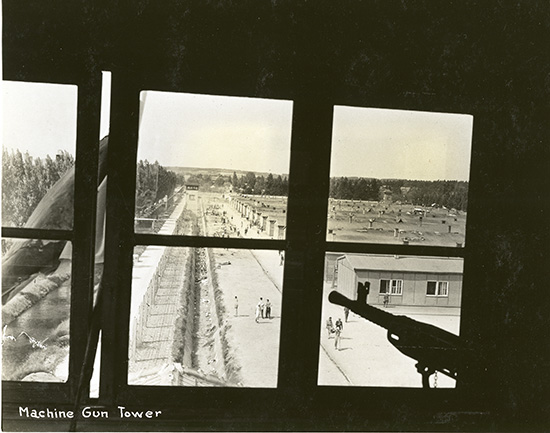 View from a machine gun tower. 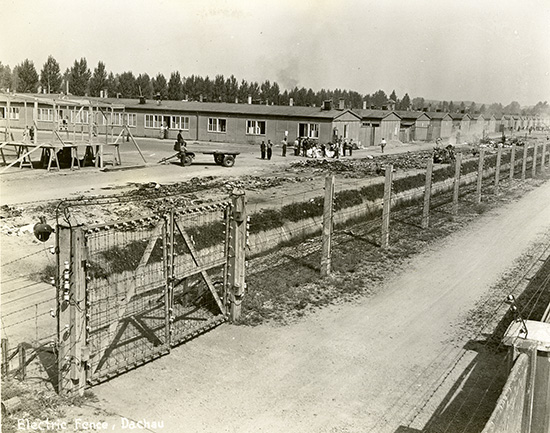 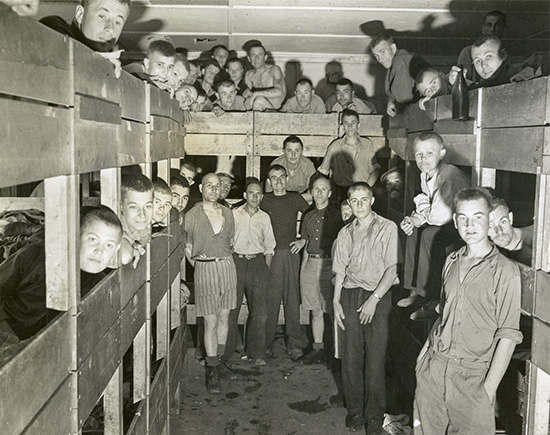