Have not been busy these last few days — have been running the V.D. ward besides a medical ward.  Surgery wards have calmed down considerably, but it certainly looks as if these poor civilians in Italy are going to be having a bad time of it for probably some 20 years to come.  When you realize what is happening here, you certainly give great thanks that there is no such battle going on in our own land.  I imagine that the very same thing is going to happen to the French too in years to come.

It’s always the poor innocent standbyer who takes it on the chin.  But in this particular business of which I speak, they take it mostly in the feet.  Yes, the Nazis left plenty of mines behind and when the poor farmers go out to reclaim their farm-land, they invariably step on mines and caflooey goes their foot and possibly more.  Of course, I imagine with the Nazis fleeing rapidly ever since before Rome was taken, they have had no time for mine-laying, but while both sides were dug in for the several early months of this year, they apparently did plenty of that sort of thing.  The civilians, too, have a dreadful curiosity and when they come across such things as mines, hand-grenades, etc., they invariably fool with them with drastic results.  And they just don’t understand it at all.

The engineers have done wonders all throughout this war and a great deal of credit for the success of the rest of the troops has to go to them.  Their bridges are masterpieces, their clearing of the mine-field where troops are to pass (though they haven’t time to clear all the farmers’ lands) is certainly a big life-saver, and along with all that they are quick to supply water to all the outfits, etc., etc.  In Sicily, they drilled a well right in our own hospital area and we were furnished plenty of water from it throughout our stay there.  Here, too, they have been busy plunging their machine into the ground to reach water some 80 or more feet below the surface.  Their bull-dozers are amazing things to watch — they clear the mounds, fill in holes, mow down the bushes, fix roads whether they are originally there or not, and, in general, fix up the place to look almost like a small city.  Imagine, they are even putting up a small building with cement floors for our showers.

A fairly good number of the cases have been belly cases and naturally make a tremendous nursing problem, what with colostomies exuding all over the place and at all times. Thank goodness that tho’ there are plenty of these, the percentage is relatively small. It is surprising how well most of these boys do.

We have now had just about everything.  For in this area, different from Sicily (thank God we didn’t have the same situation there) there are no civilian hospitals and as a consequence in the last two days we have had several civilians as patients, including a pregnancy and a spontaneous abortion. 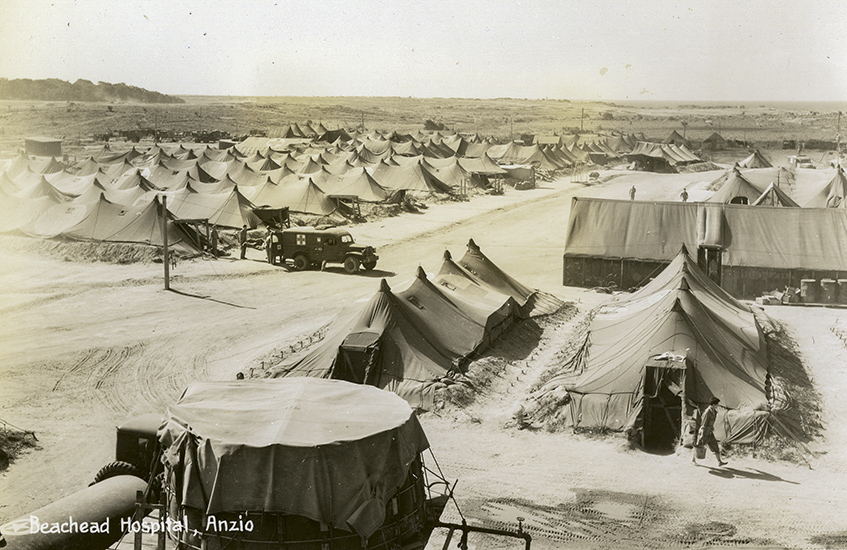