tter from René on June 14, 1944, so here’s an excerpt from the journal of Dr. Philip Westdahl about the difference between the air raids in Anzio and those they experienced in Sicily.

Our reaction to air raids has noticeably changed since our arrival in Anzio. We have far greater respect for shelter and no longer congregate awesomely in the open watching the tracers, as we would the fireworks at a world fair or 4th of July celebration.

Our chief concern is the flak from our own anti-aircraft, which rains down in certain areas which might well be our own.  Occasional large fragments are capable of producing severe injuries. It is a mighty strange feeling lying there on your cot with helmet on listening to the “Jerry” planes coming in closer for their bomb run. It isn’t difficult to identify the German motors in contrast to the steady drone of our own bombers. The Jerry has an oscillating drone, which has very adeptly been described as sounding like “you-you-you.”

Our own ack-ack fills the air with an almost continuous din, with occasional lulls terminated by sudden bursts of increasing violence. Amidst the pounding, you can distinguish the machine-gun-like rat-ta-tat of our 20mm guns, the slower and louder report of our 40mm “pom-poms” and still slower blast of our 90mm.  All this occasionally accompanied by the “not distant enough” boom and rumble of Jerry bombs.

One night they obtained a lucky and direct hit on one of our large ammunition dumps and the intermittent booming as separate piles of high explosives blew up continued over many hours, each time producing a radiating yellow glow on the horizon. 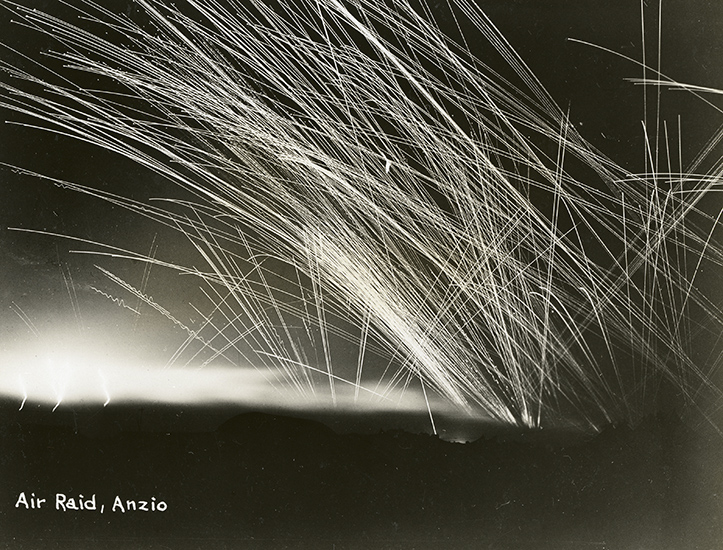