Later we walked to Claudine‘s apartment. Lilice and George sleep in a hotel, but eat and spend most of their time at Claudine’s, helping with the baby, cooking, etc. The apartment consists of three small rooms and a kitchen with a minimum of furniture. They had only the day before managed to get a small stove set up in the living-dining room, but what they burn in it I didn’t find out. They also have an electric radiator in the room and that one room was about the only warm place I found in any of the homes.

George, Claudine and Dominique were there awaiting our arrival. George is thin but does not look badly. Claudine, 21-plus, is small and pretty. She has small features, dark hair. She talks very good English, despite the fact that she thinks she doesn’t. (Would that my French was nearly as good!)

The cold has been so unusual, and, of course, the water is all cold, so that poor Claudine has developed a bad case of frost-bitten hands. They are red, swollen and have nasty-looking cracks around the knuckles. Jeanne, too, has some evidence of the same over the proximal phalanges on both hands.  Claudine is really a swell gal. I had a most enjoyable time that evening with them all. For some strange reason, Alain, they think a lot of you and are anxiously awaiting letters from you.

Dominique is a cute little rascal. She is 2-years old, walks around and talks pretty well. She’s really a darling. The doll, which you folks had sent, and which I had left at Jean-Pierre’s for her, she adores and she takes it to bed with her every night. This trip I brought her the crayons, the little black cat and the two little dogs and also the plaster soldier, nurse and doctor you sent. She was crazy about them all – particularly the crayons! She immediately took them and started scribbling “a letter to Papa” with them. I finally told her that cousin Bobsy had sent the crayons and the doll. I showed her Bobsy, so she took the pix and kissed it. Did you feel it, Bobsy?

They have, of course, quite a hard time getting correct food for Dominique. They are allowed a small amount of milk every couple of days for her and are allowed 2 eggs per month for her – if she were 3 years old, it would be 4 eggs per month. She looks like a pretty healthy little kid, however, tho’ she did have a dribbly nose while I was there. They are unable to get any shoes for her anywhere. They just haven’t made any for some reason – i.e. none for babies. Soooo, Mom, or any of you, if you can find any for her ‘twould be very greatly appreciated by them.

Dominique was really a kick when I gave her some chocolate. She loved it. Nevertheless she offered a bit of it to Claudine. (Needless to say I was well-stocked with that commodity, for besides my own supply, Fadley had added appreciably to it when he knew I was going up here.)

Gilles arrived a little after I did and he seems like a mighty fine fellow.  He’s a Lt. in the French Army now and apparently is a radio expert.  He is working in the office of the Minister of War in Paris right now.  During the occupation he was down as a registered operative (registered in London) and had a radio sending and receiving set with which he transmitted messages to England for the Maquis.  He was once caught with the radio sets in his car, but before the Gestapo Agent was able to turn him over to other authorities he managed, right in Paris, to strangle the guy and dump him out. He, Claudine, and the baby were around Grenoble most of the time, where there was a headquarters, and he told me of a hospital run by two doctors high up in the mountains there.  One medical man and one surgeon took care of all the Maquis gang in a place inaccessible to the Germans, primarily because of its height and the fact that one had to get up there by means of a form of ski-tow.

I had dinner there and talked on and on and on. I heard again the story of Yvette and saw several pictures of her and her husband [Jean-Guy].  All, of course, are hoping that they might have been in one of the sections liberated by the Russians in their latest mad dash across Germany.  As a matter of fact, Lilice did hear, over the radio from Moscow, a young girl from Paris who had been liberated over there. They happened to know that particular girl, so naturally they are, as all of us are, hoping that Yvette and others will be among those freed before too long.  Yvette and her husband apparently did a terrific amount towards the liberation of France.

Gee, I was really so sorry that my time up there was so limited, for I would have so liked to have stayed with each and every one of them so much longer.  Two days is definitely an awfully short time.  Nevertheless, I am pleased at the amount I was able to accomplish and the people I was able to see in that short time.

After bidding the family farewell, I caught the subway back to the hotel, went up to the hotel and dumped my things and then went downstairs again. As I walked the length of the lobby, I chanced to hear some music coming from the dining room. Took a look in and sure enough a dance was going on. As I looked through the door into the dance-hall I immediately saw none other than little Bambino. Went in, put my hand over her eyes and, of course, she tho’t that it must be one of the officers with whom she had been dancing a short while before. When she saw it was me, she darn near threw her arms around me. Spent a couple of hours with her, first at the dance and then over at her hotel in the one warm room – the Snack-Bar. 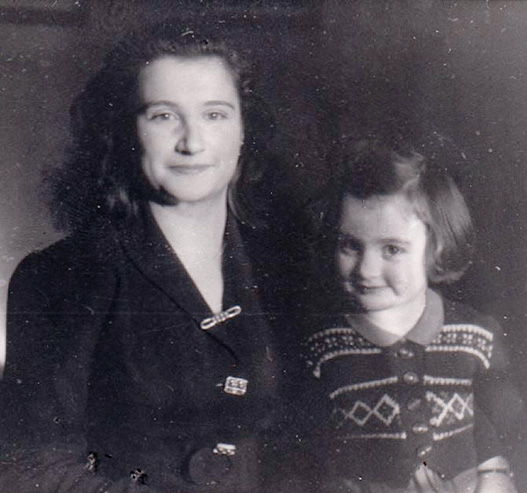 René tells his parents that “Claudine is a really swell gal,” and that her 2-year-old daughter, Dominique is “a cute little rascal.” 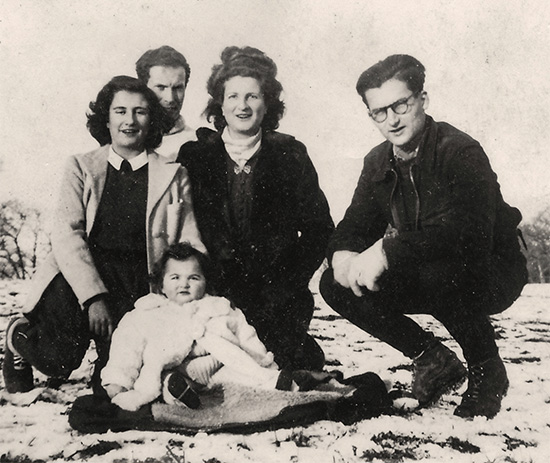 René meets Claudine’s husband (Gilles Aaronson), who “seems like a mighty fine fellow.” Gilles is pictured at far right in the photo above, taken near Grenoble in December 1943. Also pictured are Claudine (far left), her brother-in-law Jean-Guy Bernard, her sister Yvette Baumann Bernard and her daughter, Dominique Aaronson. This photo was taken about a month before Yvette and Jean-Guy were arrested by the Gestapo in their Paris apartment. Unbeknownst to anyone,  Jean-Guy died in Auschwitz on August 3, 1944. And after the Death March from Auschwitz earlier in the month, Yvette is currently at a concentration camp in Ravensbruck, Germany.