Nothing much new since last writing, except that all ears are pretty well glued to the radio these days to hear the news of when the Russians reach Berlin.  Boy, if they do get there first, old Patton is going to be one sore monkey, I am sure.  This winter weather is apparently just duck soup for the Russians.

Roy and Ed returned to us today – apparently not enough work to keep them very busy any more, or maybe there have been some improvements in that outfit to which they had gone. They had quite a good time.

Mattie wasn’t getting anywhere fast, tho’ he did seem to be better, so it was finally decided that he should be moved to the Station Hospital close by. Haven’t seen Mattie since his move, but probably will in a couple of days.

Ann Bryner is still in this neck of the woods and Serge goes to visit her daily – and, the lucky bums, they were able to arrange thru higher Hdq. Chief Nurse, to get Ann to Paris for two days and Serge was also able to fineegle in on the deal. Serge is going to take some things to Jeanne & David for me.

Bam was around yesterday – feeling fine and not doing much, apparently.

Latest joke around the area concerns the conversation Wally had at lunch a few days ago.  Some medical captain who is with a signal outfit nearby came in to the hospital for something and Wally saw him — not as a patient but to get some things from dispensary or pharmacy, etc.  Wally invited him to lunch and during the conversation, the Captain, who may have connected us with the new outfit that is here, was talking about how tough it was being over here, etc.  And then he asked, “When did you fellows come over?”  Wally, of course, answered, “Oh, two years ago.”  To which the Capt. let out a wail that could be heard around the room, “TWO YEARS!  MY GOD! That’s impossible!  Why, I’ve been over here two months and I’m more than ready to go home, I’ve had enough!  TWO YEARS, my God, I couldn’t stand it.  What about this rotation deal, anyway, how do you work that?  I want to go home!”  Then, of course, Wally had him groaning once again when he said, “Rotation?  Brother, there is no such thing over here!”

Dad, the latest letter from Lois indicates that apparently she is going home and nothing will be done till then. Don’t know particulars of when or how, but that is that – so I guess, just wait and see.

Feeling fine – hope you all are also. 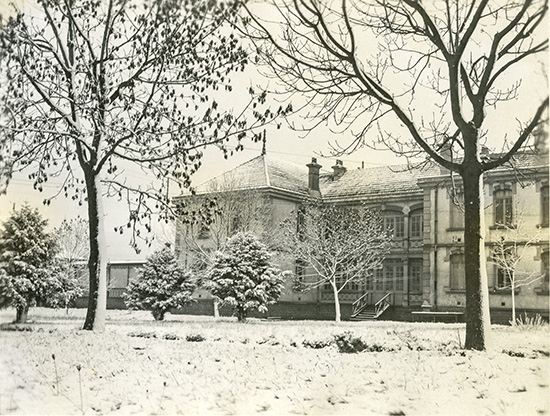 René tells his parents that there’s “plenty of snow of late,” but it doesn’t seem to faze Nurse Liz Liss, pictured below. 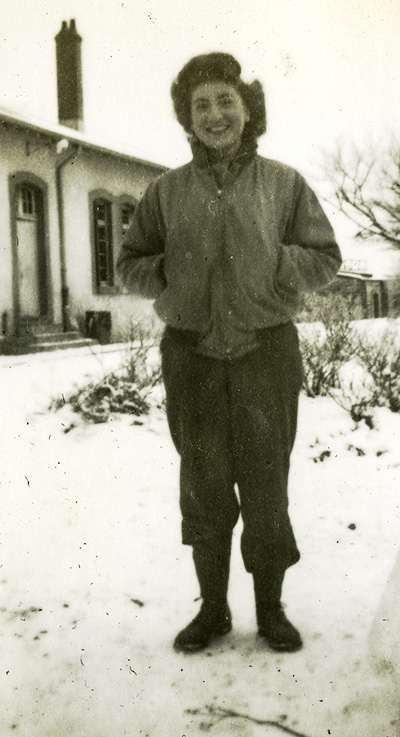