Yep, ‘tis now 1945 over here! All have pretty well recuperated from a rather wild ushering in of the New Year about which I shall tell you in a few minutes. We hope that despite the fact that the news from the Western Front in the past days has not been too good, you all had a happy start for 1945. And I hope, gol darn it, that by then you had received at least some of the several letters of mine that should have gotten to you weeks ago.

In my #75 I was telling you about things that were stewing in this pot that is the 59th. Well, at the moment, Wally is acting Chief of Surgery Services. He has to make out all the monthly reports that Mattie usually has to fuss with, and of course, at this time of year he has to put in a yearly report of activities of the Surgical Service, what kind and how many operations we did at various spots, what we have learned, etc. etc.

As a consequence, Wally is deep amongst the facts and figures so that Frank is temporarily working with Russell and myself as a team, but when Wally gets done with the reports he is going to return to the team and Frank will act as “Triager” for the coming month. The Triage job is the separating of the cases supposedly into three categories prior to operation – those needing immediate surgery, those moderately severe cases and the minor cases that can wait a little while. Actually, we have found out that if our “Shock” ward is close enough to Surgery then the fellow who runs “Shock” can usually run both the shock end of it and the triage end of it without an extra person there. When questions arise, he can always pull out one of the members of the team to examine a patient or decide a weighty question, etc. Therefore, Wally may decide to eliminate the Triage job and form another team.

A strange thing, this business of Mattie’s being under the weather. When he was over in Germany 15 years ago, he got the same thing and was pretty darn sick for a while – since then he hasn’t been bothered at all and then just as we get close to Germany again – in fact close to the same region where he first got his trouble – he starts all over again. He’s been pretty uncomfortable with a prostatitis, cystitis, and epididymitis to boot. Unfortunately, we have had to let someone else care for him now, so it is hard to tell how long he will be laid up. We only hope that it will not be long.

At present, again living with Marv and Serge. We have wonderful BEDS with regular mattresses. What a feeling and what wonderful sleeping! Using a new bunch’s beds at least temporarily until they take them out from under us. Almost all of us are in one building – one floor. The majors, in fact, just Wally, Bob, Roy & Frank, are in another bldg., but all the rest, including the nurses are in this bldg.. Yes, there is a separation – a door that Miss D. had nailed up today – sort of the Walls of Jericho! Have steam heat once again and ‘tis not too effective at the moment, tho’ yesterday it seemed to be mighty good. The boys across the hall from us are considerably warmer than we are on this side, because we have the wind coming towards our windows while they are more protected.

Yesterday, walked downtown to the PX and Red Cross Club, expecting to go to the movie house that used to be in town, but ‘twasn’t being used as such any more. Had cakes at the Red Cross and walked about town some more, visiting the local church, etc. We had quite a group exercising with us – there were about 12 of us.

A new outfit, just over, and going under strict military regulations, are running into trouble with our men to some extent.  Nurses in their gang are saluted even in their own area, and when one nurse walked by one of our boys who was working fixing up latrines outside, and he naturally did not salute her, she stopped and asked if he didn’t salute officers.  He looked around at first, thinking that there was some male officer around who he should have saluted, a general or some such, but then when he realized that she meant herself, he said, “Oh, no!  I’m just a P.O.W.” (i.e. Prisoner of War).  The nurse was so flabbergasted she just turned around not knowing what to believe. Everyone in our outfit has gotten a big kick out of this, as the kid who said it is one of the dumbest guys in the gang, a big tall, blond kid from out in the country somewhere in the west who never got through grammar school.

I find that in my last letter I did not mention having opened the rest of the Xmas presents – Tanks, Mom, Dad & Bobsy for the Blum’s Shoe box! We’re all getting fat!!

Card from Lilice again after she saw Jeanne. Apparently, Gilles, Claudine’s husband, has been called to work with the Minister of War at Paris. Address of Lilice and Gilles, etc. at moment: 27 rue de L’Assomption, Paris (16)

René tells his parents that Mattie has been under the weather and is sick enough that they have had to let another unit take care of him for now. 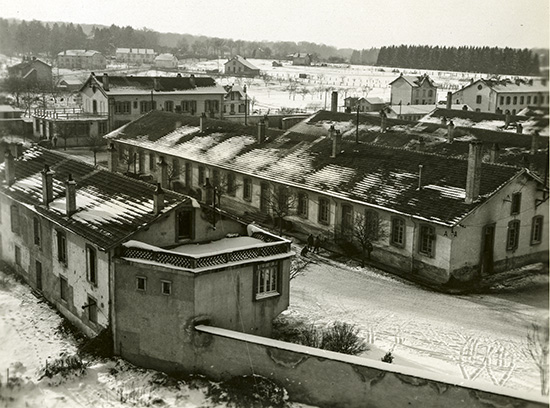 René tells his parents that almost everyone is living in one building, which even has some steam heat! 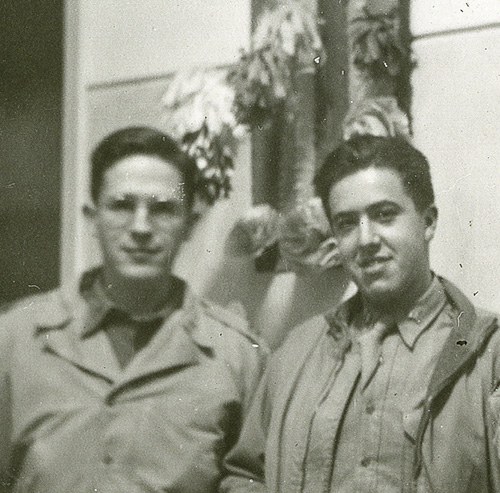 René is rooming with Marv Hodgson (shown above with René) and Serge Bryner (below). 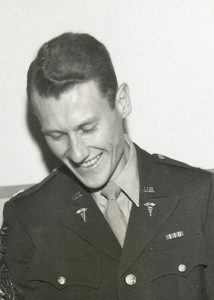 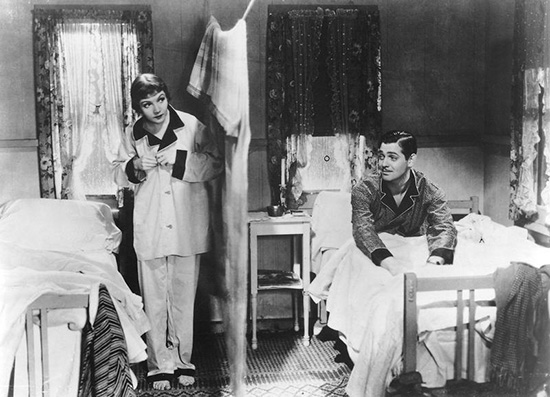 René’s reference to the Walls of Jericho comes from a scene in the 1934 film, “It Happened One Night,” with Claudette Colbert and Clark Gable.