Here we are, set up in our tents, functioning as a hospital for the last few days. Right now it isn’t bad at all despite the mud and slush that we have to slide through to get anywhere around here. However, we are lucky enough to be on relatively high ground and when it stops raining the water drains off pretty fast. We have rapidly realized that Africa is not just one big desert – probably one can find almost any kind of weather somweheres on this continent. We have had a few days typical of San Francisco foggy weather, though I didn’t think that S.F. has ever been quite as cold as we have had it here. In fact, surprisingly enough, we had a slight amount of snow fall here a few days ago.

Fuel has been quite a problem, so we have to resort to clothes and more clothes to keep warm. There have been a lot of colds floating around because of this, but so far I have been pretty lucky, though Lois has had a bum cold for the last week. At that the gals are far better situated than we are. They are in an old girls’ school building and are at least plenty dry. However, the fuel problem applies to them as well and their building is almost constantly cold.

I have been unofficially working in the Supply & Transportation Dept of the hospital, and as a consequence have been able to get down to see Lois more often than I would have had I just stuck around our hospital area all day. Now, however, since our hospital is getting into full swing, the amount of time we are able to be away from the area is naturally limited.

Despite the conditions we are working under – which certainly are far from bad, it is good to be working. And though we would all naturally rather be back in S.F. it’s far better than sitting around on the east coast of the U.S. twiddling our thumbs as we did for so long.

It’s been kind of fun trying to get things that we need in Supply because it has taxed my poor French. However, with the aid of a little dictionary and my pronunciation (which has probably been about the only decent thing I have remembered) I have been doing O.K. and am fast improving. So far, I’ve managed to get everything I have gone after.

Water has been quite a problem here, just as has fuel. There is water, of course, but to get it out to our area is another thing and because of the fuel problem, hot water is difficult to get. We are unable to take baths or showers in our own area so we go down to town when possible to get showers. George Davis (the Supply Officer) and I have been so busy that it wasn’t until yesterday when we managed to get down for a shower ourselves. The girls have almost the same problem, though they have the facilities for showers in their place – they only have hot water for a couple of hours a day and, of course, the first one who jumps in gets showered and the others may be out of luck.

We had quite a New Years’ Eve party down at the gals’ place. Besides our own bunch there were several officers from other outfits and with music supplied by victrola records and a radio, we did O.K.

There naturally isn’t much to do around here but work – and after all that’s what we’re here for, but it is interesting to wander around a little in the daytime.

Hope you all had a nice Xmas and New Years’ Day and that the New Year will be a Happier one for all. 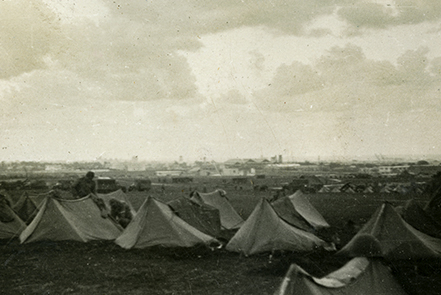 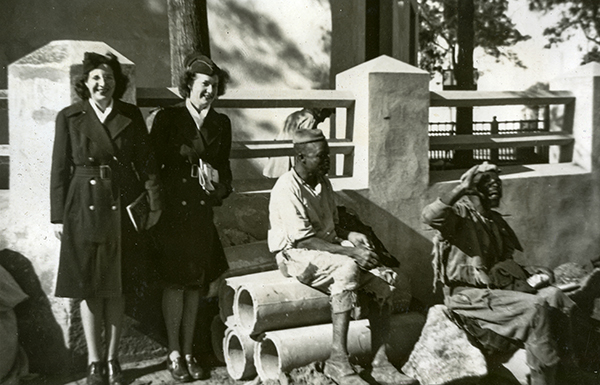 Entry from the personal journal of  Philip Westdahl, MD, about an event René didn’t/couldn’t write about to his family:

“December 31, 1942 3AM to 5AM – we undergo our first air-raid. I put on my helmet and clothes and lie beside my cot and pray that for the sake of Georgia and our baby, everything goes well – and it does! We see only 2 German bombers in the beam of our searchlights. The spray of red-hot tracer bullets is quite a sight – one nicks the tail of a bomber but she keeps going. We spend the afternoon digging a slit-trench! We expect another reception tonight – but the Germans disappoint us. Our first patients arrived today – mostly convalescents from the hospital in town.”