I received Dad’s letter of December 12th a couple of days ago, and it sure feels good to be getting such mail way over her – even if it is a couple of weeks old. So, keep it up, and we’ll get it and be able to read them over and over in spare time.

Interested in your mention of the shortage of milk bottles. We certainly see plenty of cans here – naturally a great percentage of our foods come in cans, as you have probably seen in one of the issues of Life. The so-called “C” ration is pretty concentrated stuff and not nearly as palatable as the “K” ration. The latter comes in wax-sealed packages and consists of breakfast, dinner, and supper units. Each of these units has some crackers, a can of mixed meat and egg (breakfast has beef & egg yolk, supper has veal or pork & egg white) or cheese (dinner), a couple of cigarettes, either a bar of hard eagle-type chocolate or a bar of fruit (somewhat on the order of a fruit-cake), besides some coffee or lemon extract to which water has to be added, and a couple of cubes of sugar. So you can see that it isn’t bad at all. We had that type of ration for the first few days and now we have sort of a mixture – generally regular cooked rations, however. We get a lot of stew and hash, but as it all gets mixed up in our mess kits and stomachs, anyway, the main thing that it’s enough to keep us from getting hungry.

George Davis and I have, of course, been lucky when it comes to food, as we can occasionally drop in down at the nurses and get our stomachs filled in between meals – on semi-official business, naturally. They have about the same food there, though they seem to have a little more bread and jam than we do out here, and also they have some coffee on the stove almost all the time. Of course, food isn’t the only thing we go there for.

Right now the whole gang is on a 30% basis – i.e. 30% off at one time only – one group off in the afternoon and another at night, and the third the next afternoon, etc. However, working with Davis I’m able to drop down and see Lois for a few minutes at least, even when I’m not off according to the schedule for that day. A truck always has to go down there with rations, to pick up the mess detail, etc. When we’re down there at night, now that we have one of our own trucks at last, one of our boys doesn’t mind coming down there and picking us up at 11 P.M., so we don’t have any more walks home like that first night we tried it.

Also, as it happened, Lois was put in a different group than I was (it was done alphabetically as far as they were concerned), and it was stated that the list as made up was absolutely final and no changes would be made. But when Miss Diffley noted what had happened, she went to the Col. herself and had it changed so that we were off at the same time. Not bad, eh? It seems that his highness just gets strong likes ad dislikes and heaven help the dislikes, or heaven help those who cross him. Thank goodness we’ve stayed on his good side – and incidentally, right now I think that George and I are more on his good side than anyone in the bunch.

Soon, of course, I won’t be devoting the majority of my time to Supply, as we are now set up with several wards. At the moment there isn’t enough work for all as we are only taking overflow convalescent cases from another hospital here, to lighten the load on them. So, the Col. sees fit to leave me rustling up supplies for a while as I know all the places in town by now and my French is improving sufficiently so that I get along pretty well in bargaining with the French proprietors. Of course, I’ve gotten the Engineers to pay for about everything we have had to buy, but at times it has been a bit difficult trying to get just what we wanted.

We have spent most of our evenings playing bridge at the gals’ place, but last night Lois and I went to a French place for dinner and had a pretty good meal. Things are amazingly cheap over here, so I will probably be sending money back to you by cable, as there are not many things one can spent it for. We just got paid today, incidentally, and I just realize that since we landed I have only spent about $2-$3. We change some of our money into Francs and go around with wads of the stuff – 75 Francs to $1. In a way it seems a shame that the rate of exchange is so high – when you consider how really well off we are in comparison to the native people here.

Things are better now around our camp, for we have managed to get electric lights going – we have our own generators with us – and have finally gotten enough fuel to keep everyone warm enough. We have also managed to get the mud settled down by spreading truck-loads of sand around. But, as you may remember, whenever the 59th gets its area all fixed up nicely, then they get moved out and have to fix up another area. So, that’s just what we expect again – and we won’t mind a bit.

One certainly sees some funny sights around here. The funniest are the poor little donkeys loaded down with things in baskets or sacs over each side, with some Arab sitting on top of the load. These donkeys are so small that you would really expect the Arab to be carrying two donkeys. Then, of course, there are stray camels that are being used to carry various things around town. Another strange sight is the French automobiles and trucks. Because of the gasoline shortage they have, for some time, been using charcoal burners. So there are large boilers on each car and truck and they go chugging along the roads. They say that those burners smell so much that they are forced to ride with their windows wide open and their heads out most of the time.

Everyone here is feeling pretty good now – still a few colds, but most are better. Gerbode was in the hospital with a little gastro-enteritis for a couple of days, but is O.K. again. Incidentally, we have a few malaria cases here, but otherwise no communicable or tropical diseases. 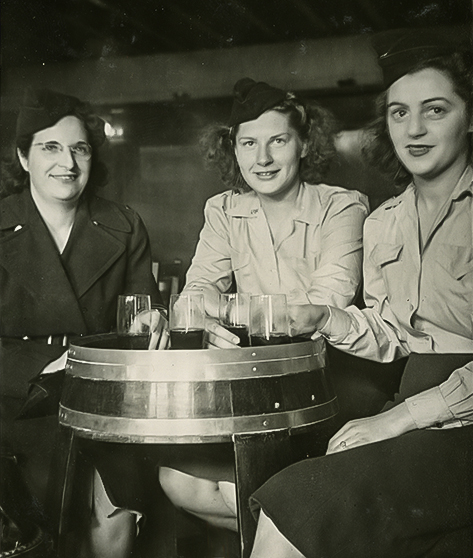 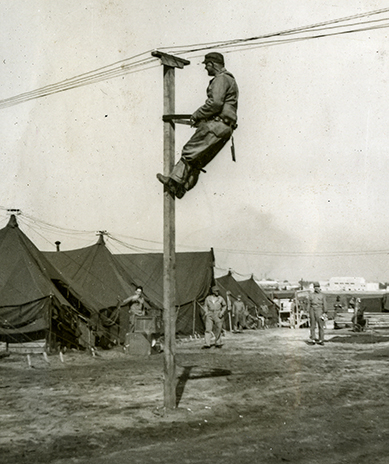 Lefty, the electrician, providing electricity for the 59th Evac. Hospital 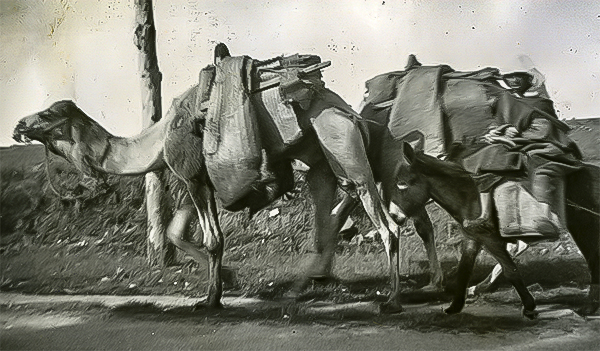 Camels and donkeys used for transportation 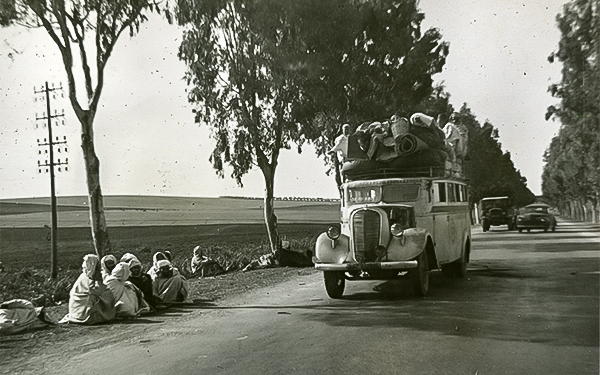