No letter from René, but on January 1, 1944, Dr. Philip Westdahl takes stock of what the 59th has accomplished since they set up

their unit in Casablanca in January 1943. He notes that the largest group of medical cases treated were: (1) malaria, (2) hepatitis and (3) diarrhea. He also reflects on the patients they cared for in November and December 1943 in Sicily, and what they told him about the fighting in Italy.

During the very cold months, November and December, we had hundreds of boys coming back from Italy with severe cases of trench foot. Their tales of the hardships on the line were terrific and I had the greatest respect for them. Most of them had been exposed to a continuous cold rain for several days at a time unable to even remove their shoes. If they did take their shoes off their feet swelled immediately and became numb, blue and often developed blisters. By the time we saw them, usually after 3-4 days, most of the swelling had subsided, but a few had obvious gangrene of 1 or more toes and all could not bear any weight because of pain. Most of them felt better when their feet were left uncovered, but this symptom varied. In some instances as many as 10% of a company were thus disabled.

These boys described the fighting in Italy as extremely difficult. Apparently the Germans had plenty of time to dig in and even their fox holes were covered by concrete. Their guns were concealed in caves on the hillside and the front concreted in and made to resemble the surrounding rock. The gun was fired through openings in the concrete, which were covered over after firing, thereby making their discovery almost impossible.

The fighting was all on mountainsides and when our boys would eventually rout the Germans out of one mountain they would retire to fixed positions on another to the rear. As they retreated they mined almost every inch of the terrain, making it terrifically difficult for our boys to advance.

The German artillery had their guns fixed to fire on all important zones and roads so that they could fire without having to see where their shells landed. The casualties on both sides were high. Our boys had to rely on transporting their equipment, food and ammunition up the mountain at night by mule-back and usually the last 1/3 of the way by foot. Mechanized equipment was out of the question.

[Click each to enlarge] Categories of admissions and totals by the 59th Evac. Hospital in 1943 in Casablanca and Palermo. 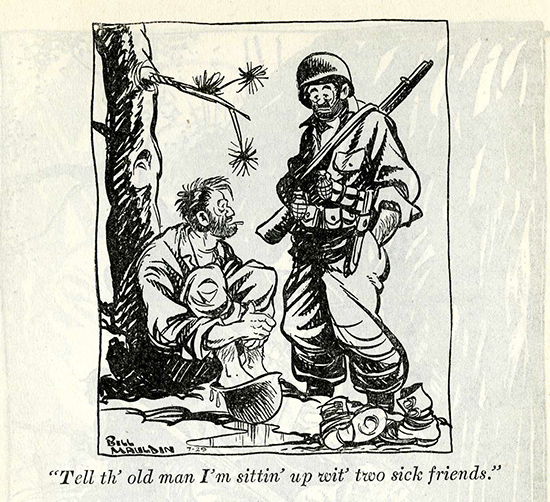 From “Up Front” by Bill Maudlin