Well, ‘tis almost Xmas Eve and am wondering how all of you have been enjoying yourselves.  It being a Sunday and I hope as nice and sunny out there as it is here today (though not as nippy, I hope), I sort of imagine that today will find the Bines out walking either in the Park, Marina or the beach — or perhaps even over in Marin County.  How about it?

Yes, while we are making plans for a rather gala time here in the next 24 hours, we nevertheless find that our thoughts are for the most part wandering back to various parts of the good old U.S.A. and wondering what we would all be doing back there if things were once again back to normal.

We here, as a matter of fact, feel somewhat guilty in planning for a good time when we realize what a nasty Xmas present was handed to the boys of the 1st Army. While many of those boys up there spent Xmas with us out in the cold fields of Africa two years ago, they had left us last year for Xmas in England, while the other boys whom we have dogged from way back in California, stayed around and were in every bloomin’ fight there was to get into. Many, as a matter of fact, are spending their second Xmas with us as patients. Despite the gaiety that may go on here in the next day, we all have had, and continue to have our ears tuned to the hourly news broadcasts to pick up bits of news concerning what may be happening to our friends and ex-patients up there.

Tomorrow afternoon the officers and nurses are giving an Open House to the enlisted men of the outfit.  Xmas tree, music, the gals as hostesses, sandwiches, fancy pastries prepared by our super-deluxe-chef, and eggnog diluted (?) with the month’s whisky ration of officers and nurses. It ought to be quite an affair.

Yes, one would almost think that this was the British Army the way the Scotch ration has been coming in regularly since we arrived in France!  And yet at the front, there have been ammunition shortages at times!!!  You figure it out!  Such rations are just for the officers and nurses, not for the men, though there are some of us, like Roy and myself, who give ours to various groups of the men anyway, most of the time. It’s about time, too, that the officers and nurses did give them a party, as is being planned for tomorrow!

For once, strangely enough, the “Gang-Greene” has had a break. Even if there is beaucoup business, we are off for Xmas Eve, Xmas day and New Years Eve and New Years Day! ‘Twas all by chance, but that is the way the schedule we have been working under happens to come out and definitely we are not sorry.

Thanks loads for the light plugs, the T-shirt, artichokes, chopped olives, etc. And also for the soups, and Mom’s little doggie pencil stand (without which her desk must look bare).

Have already finished Somerset Maugham’s “Razor’s Edge” which you sent me, and Carroll Russell has also finished it, and I see Marv, across this table from me is about half thru with it right now. Enjoyed it very much.

Last nite Bret Smart’s soup-kitchen was working, and we had some very good soup around 10 P.M. Ed Blasdel brought some bread from supper, so we also had some small deviled-ham sandwiches topped with anchovies. Not bad!

The gals that have been in Paris say that even tho’ ‘tis a long journey to and from, and they only have 2 days there, ‘tis nevertheless worth it. They were able to get around the city very easily by subway and from their descriptions they managed to see most of the beautiful and historic structures.

Took time-out to go to supper and then a nice hot shower – and what do I find but two more envelopes from 15-26th Avenue. Pictures of Mom and Bobsy from Tahoe were swell, but pourquoi none of R.B.Sr.?? See, guess I’m never satisfied! You both look mighty good.

Dad, In regard to your references to asking if we can help Anthony and others…just whose son do you think I am??? (Or are you denying it these days?) And, don’t think for a moment that the reason I haven’t wired you any money in the last few months is because I have spent it! 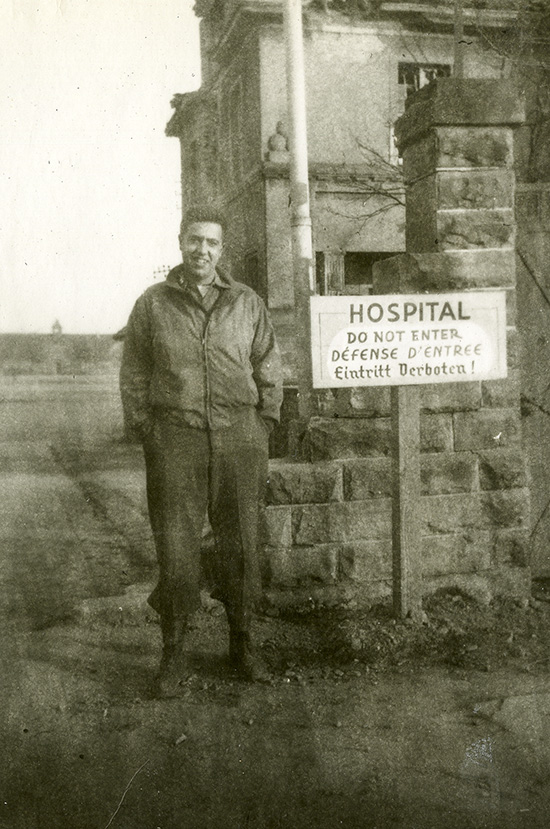 René writes to his parents on Christmas Eve. 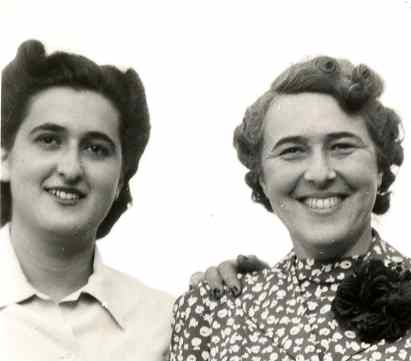 He thanks them for sending photos of Bobsy (his sister Barbara) and his mother (Alma.)

Roy Cohn may like his cigars, but evidently he gives his Scotch rations (distributed to officers and nurses only) to various groups of enlisted men in the unit — as does René, most of the time.