I have been rather on the punk side the past few days. Friday the 27th, I felt only fair, but not bad. The next day, however, I developed a constant mid-epigastric dull pain, which lasted all day. My temp. began to climb in the afternoon and by 8 P.M. I had 101.4 and Lois and others convinced me that I should go in the hospital then, instead of waiting until the morning, as I wanted to do. I had a mild headache with the temp. and so acquiesced. However, the next day I awoke feeling fine and couldn’t get a temp over 98. Yesterday, with temp. still normal and feeling good, Sewell let me out. And then, darn it, a few hours later I got the same bellyache back again. I’ve had it on and off during the day, but today ‘tis O.K. and I think I’ll live.

A lot of the gang have been ill on and off. None have had real malaria, but apparently have had sand-fly fever. Others have had re-occurrences of their dysentery, etc.

I told you in my last letter that the three gals who were in the car accident were going back to Africa. Well, only Irene and Bessie went back. Fran Powers seems to be doing O.K. and they decided to keep her and see if she won’t be well before we pull up stakes, if we ever do.

Oscar Carlson wandered in here day before yesterday. He is located very close by. Bam’s friend Westmoreland is also close by, as are the boy friends of many of the gals. 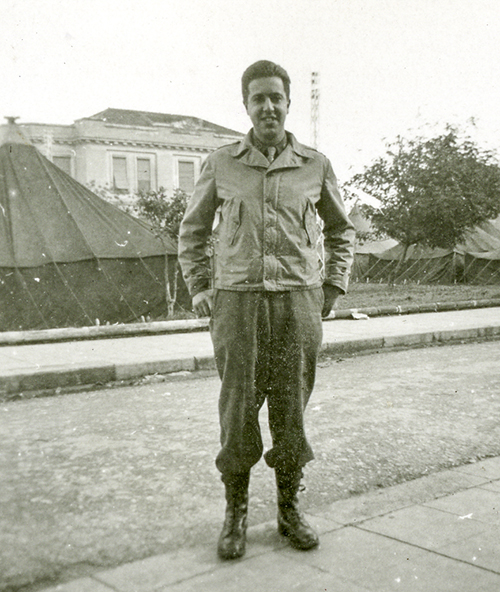 René in front of the hospital in Palermo. In today’s letter, he tells his parents that he was inside the hospital overnight – not as a doctor, but as a patient.

On August 29, Phil Westdahl, MD, wrote in his journal: “WHAT A DAY! Our first rain and it really comes down in torrents. Every roof in every building leaking like a veritable sieve. Most of the rooms, with tile flooring, are converted into shallow swimming pools with cots, tables and chairs practically ready to float. The whole gang is in a turmoil moving stuff into a few remaining dry spots in the halls. We scramble up to the roof and have a great time replacing broken and displaced tiles. Now we wait for more rain to test our repair job.”