That nite we slept perfectly o.k., but when we awakened we found that there was even more water in the area — the nurses area was inundated, Johnson‘s tent was under about a foot of water, Chatley’s was under a good two feet, and even the tent next to ours was about 3 inches under — i.e. anything on the floor was wet.  We, at that point, were high and dry, but just as we started to get up, we noted a thin trickle in the corner under my bed.

We went to breakfast and by the time we got back our whole flooring was wet.  Luckily we had gotten everything off the floor and managed to keep it all dry.  But, we moved out of there in a hurry.  The big-wigs had selected another spot to move to — another field, close to the river, but presumably high enough so that we would have no repeat of the “Flood of the 108th.”

We started moving at noon, finally – some of the trucks having been loaded by then and the various departments pretty well packed up. I was put in charge of the loading of things and clearing out the flooded area with Chatley to help while Jobe and Mitchell went to the new area to get things organized there.  The new area is only about four kilometers from the flooded one — just about 1/4 mile from the airport of Fritzlar.  It’s sort of muddy, but at present isn’t unbearable.  I thanked goodness that I had my overshoes for wading around that Wabern area, for the water even came up over the tops of them in spots. Most of the boys waded around bare-foot trying to get things out of the tents and loaded on trucks. It was a mess. The men didn’t want to work at all—particularly the bunch going home—for they felt, and rightly, that the whole thing was unnecessary, that something should have been done about the whole situation long before. It was quite a job getting them to work.

We finally got all of the new area cleared the following day, and what a mess everything was in — so much was wet that we just had to leave things out in the open until the sun came out so that they could dry off a bit. So much of the tentage is now just salvage material, for when they were rolled up they were soaking wet and they do not dry out unless hung up.

Then, on the morn of the 23rd, the 105 happy men pulled out of here at 5:20 A.M.  What a gang!  Some of us (Chappie, Jack, Chatley, Schmitty and I) got up to see them off, and they were certainly a happy bunch. As a matter of fact Clint Green came in and woke me up and made me get up to see the bunch before they went. 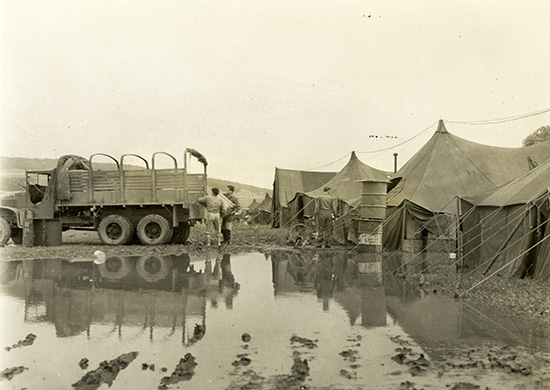 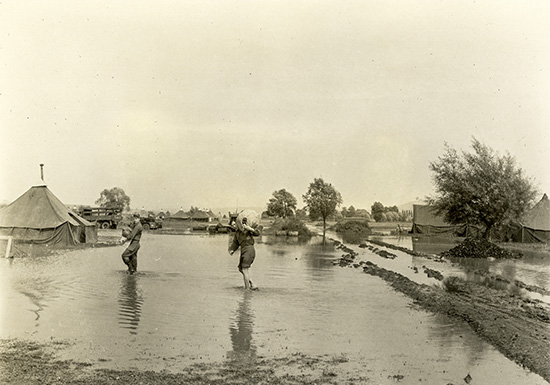