Surprise!! Last night I attended Passover Services. There were services in one of the local churches and then a Seder dinner conducted at the Red Cross. Went with Liz Liss and Martha Morris and two non-Jewish officers who just went because they were interested.

The services at the church were disappointing as far as I was concerned. It was an orthodox service (despite the fact that Rabbi Stone is a real reformer). Well, maybe it wasn’t really truly orthodox, but anyway it was something that I wasn’t used to and was totally strange. The place was crowded, considerably more so than Rabbi Stone had expected in his wildest dreams: soldiers, sailors, a few marines, and quite a group of civilians.

He had expected around 300 at the Seder dinner and got about 500, so he had his troubles when it came to that. As a matter of fact, our group was so nice as to let most of the rest of the mob get into the dining room before we got into line, that we soon found that there just wasn’t any more room in the dining room for anybody. However, it so happened that one of the officers with us had, that morning, examined all the food-handlers that were to handle the food that night. So, by a little back-door work on his part, and a little speaking of German (the “chef” spoke no English and the officer no Italian, but both spoke German), we soon found ourselves in a room quite separated from the main dining room — and, at least, we were able to partake of some of the food.

It seems that there was really just about enough food but not enough places for people to sit. Some of those who were at the tail end of the line, I am told, had to be satisfied, however, with hard-boiled eggs and a few trimmings. The important thing to most of us was that all the civilians, for the most part Jugoslav refugees, were among those that were in the main dining room and got plenty of food and were able to partake in Seder services for the first time in several years. One of the officers in our small group of 15 performed part of the usual ceremony, but as we didn’t have the correct book, we all came to the conclusion that our services were not only just “reform,” but actually “revolutionary.” At least the spirit of Passover was there and everyone enjoyed his or herself.

One reason why there was such a mob at the Passover was that some outfits even flew their men in from other parts of the island, and naturally Rabbi Stone had not accounted for that. Also, the Navy supplied quite a bunch.

René went to Passover Services with Liz Liss (above) and Martha Morris (below) and two non-Jewish officers “who just went because they were interested.” 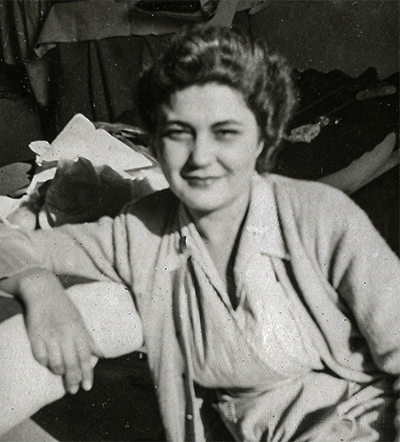 After the service they enjoyed the Seder dinner conducted at the Red Cross. 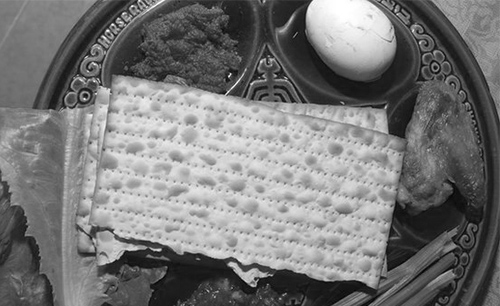