Here are excerpts from a letter that Lois McFarland wrote to family back in California.

I’ve been trying to write to you for ages, but, golly, we’ve been so, so busy. I never do anything but work, eat and sleep. And the whole night – from 7 to 7, I’m constantly on the go.  I’m still on nites, though I have hopes of coming off before long. At present, we have over 1,100 patients and the majority are malaria. I’m lucky to be on the surgical ward – for I like this work far better than medical – though we have some pretty gruesome cases. Ren is working in Receiving now and likes it better than having wards – though the hours are longer and the work harder. At the moment he’s not feeling too well – has that famous G.I. upset (polite name) again. I’ve luckily escaped another bout with it since my first experience.
Bob Hope was here the other day; but working nites, I missed his shows. Everyone who went enjoyed them greatly.
I haven’t had much sleep lately. Day before yesterday, I had 3 hours (10 to 1 off and on). Must’ve been the heat; but I simply couldn’t stay in bed longer. And yesterday, Trudy, Buddy and myself, went to town after breakfast and didn’t get back till 2:30, so I had about 2-1/2 hours sleep,
‘Twas the first time any of us had been out of the hospital area since our first day here, and we had a grand time. We started into town about 8:30, only a few blocks and peeked into every little shop we passed. There weren’t many, but most of them were pure junk. Scads of religious pictures and wall hangings and statues; lots of confectionery shops with very little to offer; lemonade stands as frequent on the corners as in N.Y.C.; fruit, candy and pastry, and almond vendors parked on the sidewalks. The fruit is mostly grapes and prickly pears, then tiny plums (that look like apricots) and melons, and some green pears and peaches, and lots of figs and lemons. The candy is mostly a kind of almond brittle, only the caramel part always is dark and a little scorched, and always sticky because it’s so hot. The pastry sold on the street is something that is deep-fat fried and looks like do-nuts and croquettes. Have been afraid to try any; and it’s been so hot, it doesn’t appeal to me.
They have quite a bit of ice-cream, but it’s more like sherbet; and of non-descript flavor. You can only eat it on the Q.T. as it’s against the rules now, and the M.P.s will pick you up.
We stopped first at a little confectionery shop and bought a piece of candy apiece, the size of a cookie, for 7 lire. ‘Twas very good, very sweet, a maple and chocolate flavor and full of chopped almonds. We stopped at another such shop and bought a piece of luscious-looking chocolate candy – only it was lousy. Tasted like a stale cookie. Then we saw several people eating ice cream cones, so we sherlocked around the corner into a little alley, ‘till we found the source. The people were thick around the stand, and were buying them for 3 lire; and when we came up, the young fellow served us first – over the heads of the others and gave us each a double portion for 5 lire. The cones were nearly like at home.
There are an amazing number of people who speak English here – having lived in the States several years. Or others that come up and try to tell you they have a brother in Brooklyn! Almost every other guy has a brother there, it seems!
The people aren’t a bit shy about staring at us – as we walked down the street, they’d stop in their tracks and stare. Or a group would stop chatting and all of them turn around and grin at us. One gal, with a child clutching her hand, came alongside us and walked there, her eyes glued to our faces and grinning from ear to ear.
I can parles to the people just a little – by putting an Italian accent to my French. And I can understand them quite well, if they speak slowly enough – for so many of the words are very similar to French.
Some of the girls are very attractive and well-dressed. Most wear shoes or sandals with about a 2” or more platform. The whole populace are short in stature, and I feel like a giant along side them.
Oh, but the best looking thing here are the civil police. They’re a handsome and romantic lot and taller than the average and very striking in their snappy uniforms. They derive their authority directly from the King and are non-political. The allies recognize their status and so they continue to hold their positions – and actually have been a tremendous aid to us in maintaining law and order in the City.

My love to all,
Lois 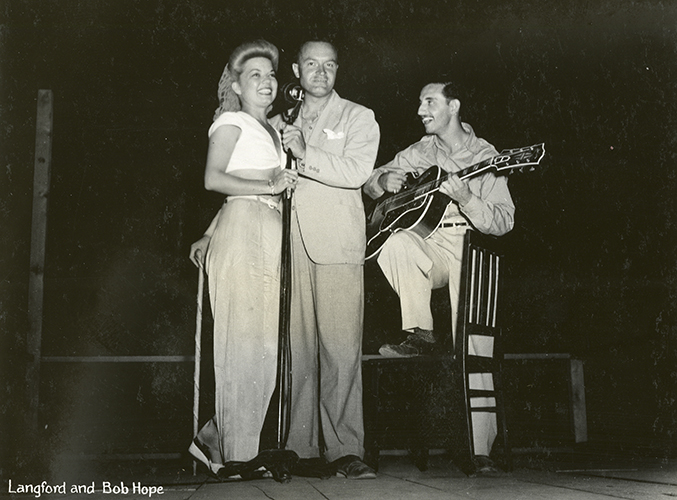 Because Lois has been working nights, she wasn’t able to go see Bob Hope’s show. 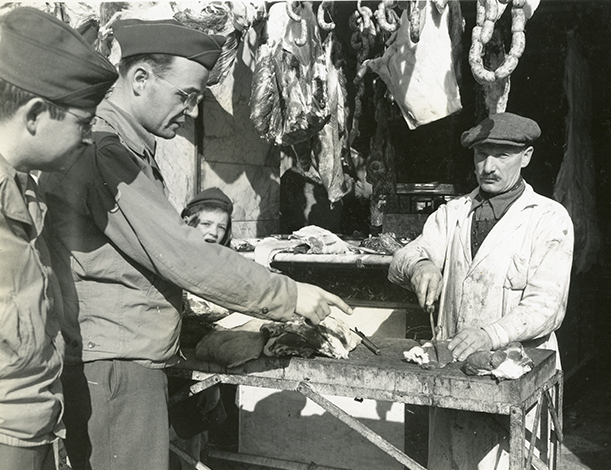 Lois tells her family about the various street vendors in Palermo.