Strangest coincidence to occur as far as anyone in the outfit is concerned, is, I think, the one that happened to my friend Davidson about two weeks ago.  He’s the one, you will remember my telling you about, who used to be General Patch’s driver in the U.S. when the latter was Lt. Colonel, and when our Col. found out about that he made him his own driver.

Well, after we had moved out of the area where we were in with that other outfit (the one we had shocked on New Year’s Eve) Davy had to go back there for some reason or other.  He was there at noon time, so he went into this other outfit’s chow line before heading back.  Davy being from the South, whenever he hears someone with a southern drawl, he always asks them where they are from in the hopes that he might meet someone from near his home town.  Anyway, in the chow line he did hear someone saying “you-all,” so he asked the kid where he was from.  When the kid said he was from Virginia, Davy said, “Where in Virginia?” and when the kid mentioned the name of the town, Davy said, “Why, that’s my home town!  What’s your name, fella?”  To which the somewhat be-whiskered 19-year-old replied, “My name’s Davidson, I’m your brother!”  You can imagine Davy’s surprise for he had last seen the kid when he was barely 16 years old, and hadn’t even started to shave.  And tho’ Davy knew the kid was in the Army he had no idea that he had come overseas as yet.  Top that one for coincidences if you can! Apparently the kid recognized Davy after the first question, but Davy hadn’t the slightest idea that the fellow would turn out to be his brother!

Just after supper when we started evacuating patients to an outfit along-side an air-strip, I decided to take a ride with the ambulances to see what I might see. And, I saw it! Passed an outfit I knew, so decided to find out if Lynn was there…and he was! Was sorry I hadn’t known he was so close earlier in the day, for I could have spent the whole day there with him. I did have, however, an enjoyable, tho’ short time with him. Incidentally, Lynn looks fine, in case any of his family are interested….

Bob Escamilla left yesterday. He will undoubtedly call you up when he arrives in S.F. He gets 45 days home – the War should be over over here by then. Sewell is now acting Chief of Medical Services.

The Old Man again took off to visit his son – this time at the tip of the Western Front. His son had humped across up there and the Old Man was worried about him till he located his gang by phone and then managed to get away to see his boy. Quite a long jaunt, which almost ended disastrously when an artillery shell landed mighty close to their jeep in one sector when they were closer to the firing than they realized. 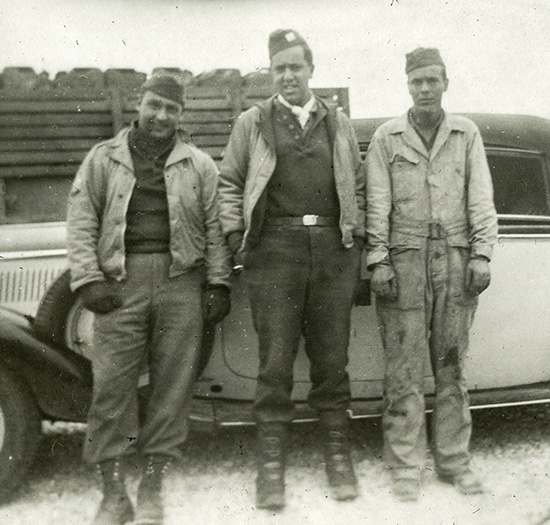 René tells his parents about the “strangest coincidence to occur as far as anyone in the outfit is concerned,” that “happened to my friend Davidson” — referring to John Davidson, pictured above at right. Also pictured is Clint Greene (at left) and René (in the middle).