As the old saying goes, “If it hasn’t happened to the 59th, then it just couldn’t have happened.”  Well, here’s one for the publicity fiends, for Hollywood, or just for Dr. Kildare Westdahl and Dr. Gillespie Mathewson. As Phil said, for him it could be entitled, “Once in a Lifetime.”

It all started a few nites ago just shortly after supper, when the drone of a couple of more planes was heard over-head.  ‘Twasn’t anything the least bit unusual, for we are not only used to having many a plane overhead, but we are also used to innumerable planes “buzzing” the hospital — either for a look-see or to say hello to some one of the gals with whom the pilot has gone out at some time or another.  Ordinarily, unless the planes tip the tops of our tents, or unless there is a hoard of bombers going over and we come out to count them and to speculate as to which target they are going to paste hell out of today, we pay little heed to them.

That nite, however, the well-known little observation planes that came over the hospital, two of them, circled the area a couple of times and waggled their wings rather urgently.  Even then, most of the people thought, “Well, this must be some special friend of one of the nurses.”  In Italy, the fiancé of one of them used to land right in back of the nurses’ tents whenever he came to visit.  These two circled once more and then the lead one flew over the big red cross that we have stretched out in the field next to the hospital to mark our installation as a hospital.  Right by the cross he dropped a bag of some sort.  Even that was not unusual, for we had received mail via that route when in Southern France.

One of our boys ran out and picked up the bag, opened it, read the note that was inside, was rather dumb-founded by its contents and consequently slow to do its bidding.  The note said, “Clear the highway of traffic for 300 yards.”  However, by the time any action to clear the highway was being taken, the lead pilot had seen that the highway, that super-highway, was clear enough in one lane and so he was coming in.  Right behind him came the second plane, landing neatly on the highway and taxiing up to our entrance, getting slightly off the road and stopping.  By that time everyone was agog and all that could had run out to find out what the score was, why the planes were in our front yard.

A young Captain got out of the first plane and a Staff Sgt. out of the second.  The Capt. explained that there was a sick G.I. in a German hospital who was in bad need of expert surgery, and who was much too ill to be moved, and that a couple surgeons were requested.  Mattie, of course, decided to go himself and took Phil with him.

As the pilot knew only that the boy was bleeding, Mattie and Phil delayed only long enough to take a few bottles of blood with them and to pick up a few of their own personal belongings, along with a few presumably essential instruments.  Each one got into one of the planes, they taxied up the road a little ways, turned around and off they went, airborne in no time and heading straight for Heidelberg.  When the first plane was heading up the road, against traffic, before turning around to take off, a truck came up over the crest of the hill and was so surprised at the site of a plane coming toward him on the road, that he just turned right off the road and into the ditch on the side — no damage, but one surprised truck driver.

The next day, shortly after lunch, when we heard the familiar hum of the small planes, we looked out of our tents and saw Phil and Mattie circling the area in preparation to land. This time our boys knew what the score was and had the traffic stopped well in advance.  The planes set down neatly, as usual, and the mob encircled them to hear what Mattie’s story was.  Bob Spring, our x-ray man and special photographer talked the Capt. into taking him up so that he could get some pictures of the area from the air, and the Capt. gladly did so.

There were plenty of surprised truck-drivers and even motorcycle M.P.s as they passed our area during the short time that those planes were parked in our front yard.  After Mattie had gotten some more blood and a few more things to send back with the planes, they once again took off, the crowd dispersed and we listened avidly to Phil and Mattie’s story of their experience.

It seems that his young G.I. had been wounded and taken prisoner in early January, having a wound of his hip.  Presumably he had a fracture of the neck of the femur and in February it was necessary to operate and remove the head and neck of the femur because of osteomyelitis.  From then on he ran a chronic septic course, and was transferred to the hospital Mattie found him in from some other spot, and had one bout of hemorrhage from the wound site a couple of weeks ago. He had another severe bout of hemorrhaging from the wound the day Mattie was summoned and, despite the fact that they were pouring blood into him, he was terribly bled out and still bleeding when Mattie and Phil arrived.

The Germans, strangely enough, use direct transfusions and do not have any of the bottled and preserved blood that we use practically exclusively.  All of theirs seems to be direct from donor to recipient.  This G.I. had been discovered by a couple of medical officers whose job it was to check all the German hospitals taken for American patients, and also to supervise to a certain extent, the continued function of these hospitals, consolidating when necessary, etc.  The Capt. who found this boy was not a surgeon and when, unable to get an American surgeon from the nearby units (non-medical), he appealed to the pilot who said that he knew of only one hospital at which he was sure of landing and that was the 59th, for he knew he could land on our highway.  And that was how the 59th was selected for this errand of mercy.

When Mattie and Phil arrived at the field, they were rushed by jeep to the hospital where, they both said, they were treated exceptionally well by a very efficient staff.  The boy had had to have a vein cut down so that transfusions could be given and they had a needle with a tubing connected, sewed semi-permanently into his vein.  They gave the boy some of the blood they had brought and as he was actually too ill to be moved from his bed, they did the operation on his bed.  They found the bleeding vessel and amputated the leg, gave some good doses of Penicillin and bowed to the audience.

They stayed over-night and the next A.M., before leaving, they were gratified to find that the boy was a great deal improved both subjectively and objectively.  Incidentally, when they got there his hemoglobin was down to 15%!  And so they had very definitely “saved a life.”

Flash!!! Bishop just got his Majority tonite and to top the day off he had Huff fix him up – one day as a Major and he has to have a hemorrhoidectomy!!! 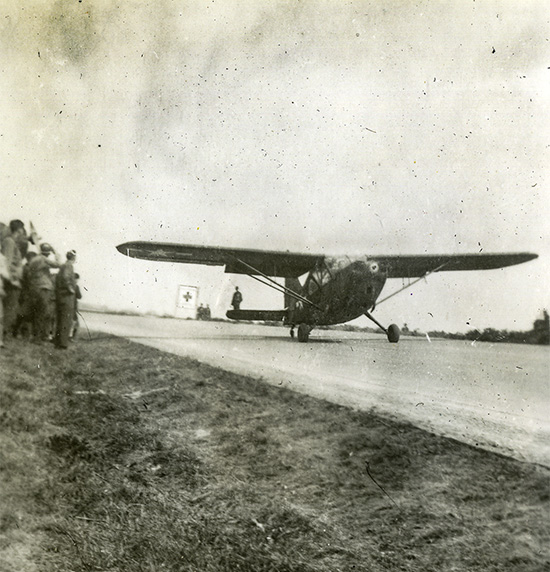 One of the two planes that landed on the autobahn next to the 59th Evac. Unit to fly Drs. Phil Westdahl and Carleton Mathewson (Mattie) to care for an seriously ill American soldier in a German hospital in Heidelberg. 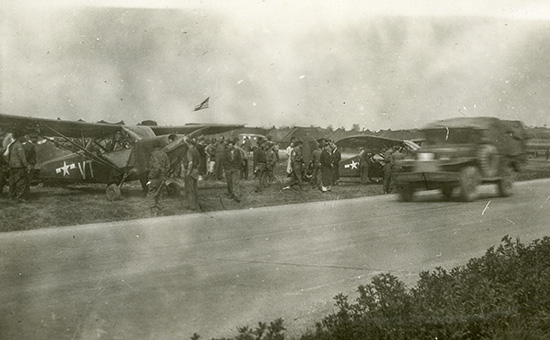 When the planes pulled off the autobahn, they attracted quite a crowd. 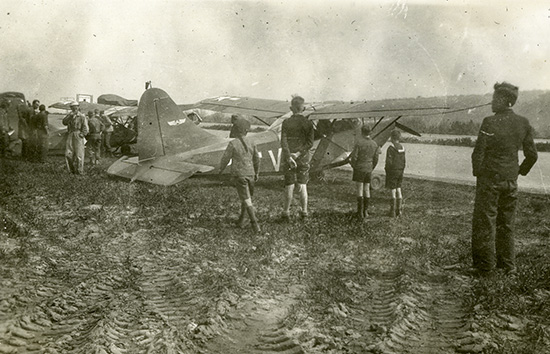