Before I get started, thanks oodles for the birthday presents – received the soapy wash-rag or whatever you might call it, and it has been put to good use several times already. ‘Tis really swell. Also got more photo paper and more films. Have several films undeveloped at the moment, but shall develop them in our own dark room with a few days, I hope.

I managed to read Bill Collie’s copy of Wilkie’s book while enroute to Sicily – at the time I was reclining in a comfortable bunk on board ship, taking sulfaguanidine to get rid of the bloomin’ bacillary dysentery that I managed to pick up. But, fortunately I only had it for a few days. Chappie and Bishop and Drew and I were all ill those few days. As a matter of fact, we were among the very last to get it – practically everyone in the unit having had it before they left Casa. Lois got it the same time as I did, apparently, but is only now over it. Some have had a couple of such episodes – original cause?? Many speculations but no proofs. Of course, we had many such patients while in Casa, and now, even, have plenty. And with flies numerous, despite as much screening as we are able to put up, they seem to delight in getting into places where they are not wanted.

Yes, Dad, the mosquitos are plenty big and plenty vicious both in Africa and here, more so in Africa. They are very numerous here and effects are being seen. Prophylaxis is definitely being kept up, but difficult at times when units run out and then the bugs strike. So far, have had no such difficulty in our gang. Some, we found, cannot take Atebrine so they are on Quinine.

Gee, Pop, you were sure swell to write so often. It’s really a marvelous feeling to get mail over here, and thus keep up to date on things that concern those we love. So, up to your old tricks again, eh? I can just picture you and Bobsy traipsing around the dance floor creating quite a stir. But ye Gods, your wandering around in the make-up has me still howling – kind of got out of hand, it seems. I wish Lois knew you better and could visualize you thusly better. Can just see, too, how exasperated Mrs. B. must have been. Sounds as if you sort of had a following like the Pied Piper. Maybe they did think that you were at least “Pied”, or maybe “Pie-eyed”.

At the moment, we are going full blast in a rather nice town in Sicily and are set up in what used to be quite a Medical Center. It fact, rumor has it that this was one of the medical establishments of Italy, if not of the world. The amount and quality of equipment that we find here is amazing — it’s really a grand set-up. Due to the fact that some damage had been done here, we have had large groups of prisoners voluntarily cleaning up the place and aiding in the work around here. So, it’s now beginning to look pretty good. The hospital is going full blast, but due to the Evac. system, we have primarily medical cases.

We are living in buildings and so are the patients and men – rather comfortable quarters though the hospital is rather crowded. As yet, we have not had an opportunity to do any walking around, but I have pretty well covered the whole town in my jeep wanderings, and it seems to be quite a nice place considering everything. Some of the nearby small towns aren’t anything to brag about – rather unclean, etc. – but certainly they have nothing to compare with our friends the Arabs whom we encountered all over the Northern and Western part of Africa.

Right now I am using the typer in headquarters and Lois is on night duty in the hospital. Last night I was Medical O.D. so slept right in Receiving, but spent the time before midnight reading the Post up on Lois’ ward. She just went back to work two nights ago – having finally recovered from her dysentery. The night shift is a 12 hr. shift and is kind of tough, as we get the majority of our new cases in after 4 P.M. However, she won’t have to be on nights for more than a couple of weeks.

One nice feature about our new set-up is that we have a combined officers’ and nurses’ mess hall, and consequently Lois and I are able to eat our meals together. In the past, the officers ate and then the nurses ate, as we didn’t have enough sitting room. Our mess has been pretty good, particularly the last few days.

The weather here has been plenty hot and one no sooner takes a shower than he is dripping wet again. According to the books, it can’t be this hot but as usual, the books are wrong. At any rate, these buildings are sure much nicer and cooler than tents. 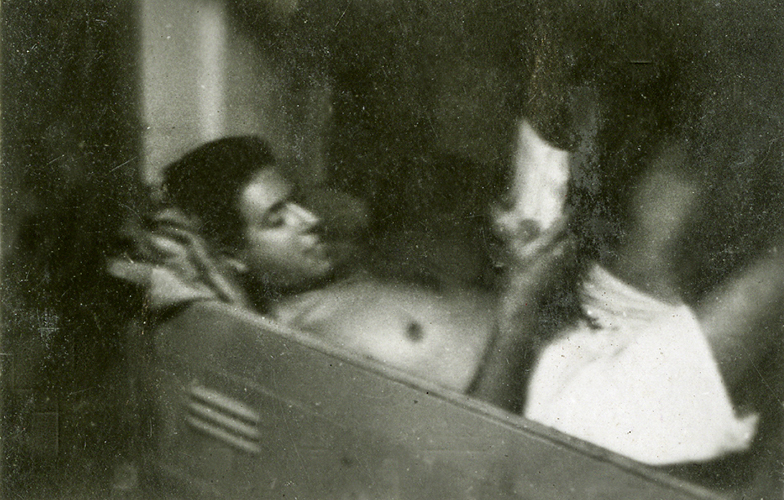 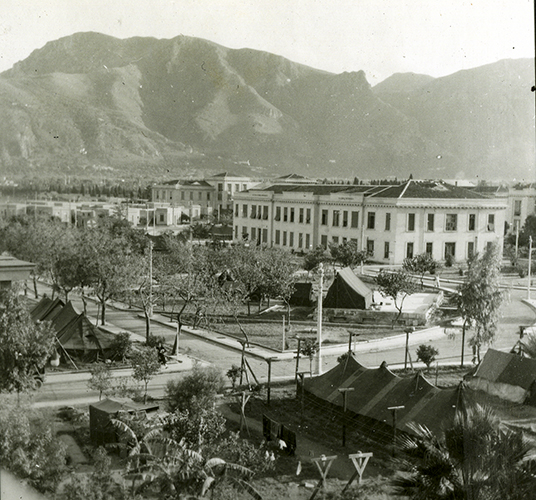