No letter from René on April 1, 1945. Here’s an excerpt from the journal of Dr. Philip Westdahl about the conclusion of their 75-mile journey to Tiefenthal, Germany.

As we drove through the Saar toward the Rhine, we could feel the hostility in the air. The German men, women and children on the streets paused to stare at us with a hateful glare in their eyes, while others went about their business with an air of arrogant indifference. They did not have the appearance of a defeated people. Our problem in dealing with them will not be over when the last shot is fired in this war. It will continue until the last vestige of Nazism and Prussian militarism has disappeared, either by re-education or eventual dying out of those in whom it is inbred, and that group includes the children who have known nothing but Nazi teachings. Until that time we must deal with them severely but justly. Our purpose must not be one of revenge in this war, but of prevention of another.

The Saar territory is truly beautiful country. Vast stretches of fertile rolling hills and valleys, well cultivated. Irregularly scattered throughout the fields were German slit trenches, recently dug in their frantic retreat and defense, and already being filled in by the German men and women working in their fields. Incidentally, these people were all in the elderly age group, gray headed and bent over.

Our captured and wounded German prisoners told amazing stories of their retreat during the past week. They were ordered into Army trucks by their overbearing and desperate officers and dashed several miles further back into German territory and dumped out again in the middle of the night to dig their fox holes for another stand. They moved always at night to avoid strafing by our planes. The German townspeople and farmers begged them, and sometimes threatened them, to move on and not defend their town or farm for fear of bringing destruction upon it. White flags replaced the Swastika hanging from house windows.

At Kaiserlautern we first came upon one of the famous “Reichsauto-bahns,” the Nazi super highway built by Hitler early in his career for purely military purposes. Little did he realize that it would some day be used so effectively against him; our tanks and trucks and other equipment are pouring over it in continuous streams day and night. The highway is a masterpiece of engineering. It consists of two lanes separated by a strip of grass, one lane for each direction of traffic. Each lane permits about two large vehicles abreast. They are constructed of concrete and are as smooth as glass. There are no crossings, the few intersections being underpasses. The highway extends for mile after mile, and in the region between Kaiserslautern and Grunstadt it runs through beautiful forests and farming land. 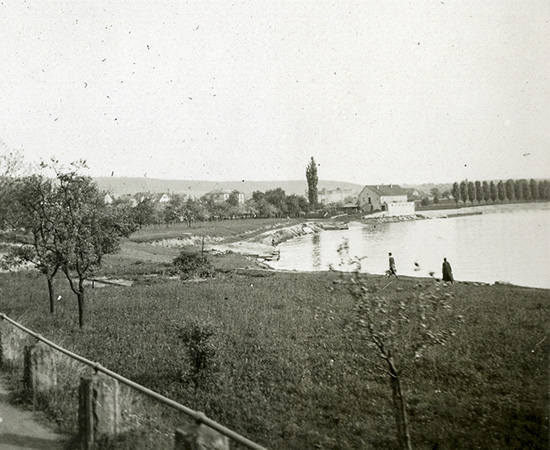 Phil Westdahl describes the “truly beautiful country” their convoy is driving through. 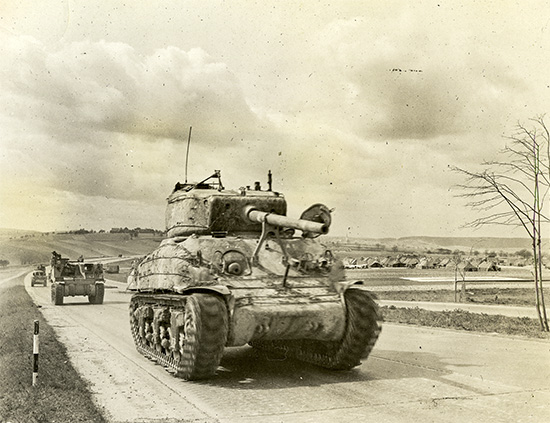 A tank and other vehicles on a section of the “Reichsauto-bahn”.