I have seen some spots that are truly amazing.  I never thought that the sight of destruction would be a swell sight to see, but the places I saw were just that — for the wreckage was not of buildings in the towns, but wreckage of nothing but enemy vehicles and trains.  When you see enemy vehicles lined up bumper-to-bumper along long stretches of road and see trains nearby wrecked in similar manner (charred so that none is any good except as metal) with several railroad guns in a single stretch, it shows what our strafing planes can do.  It also shows the men that they have just that much less of the enemy equipment to contend with in their progress toward Berlin.

Have been glad to see that only a small number of the towns and cities have been damaged much.  On the whole, to date, they haven’t had it as bad as I expected them to have it.  I thought there would be many a small town flattened, but they’re all in pretty good shape.  As the battle gets stiffer, however, I imagine that the towns in the way will take more and more of a beating.  But the Nazis seem to be just about backed up to their own border so that it will be their towns that take it on the chin rather than France and the other countries that Germany had occupied.

Have seen a lot of places in the last week, but unfortunately haven’t had time to stop long enough for more than a fleeting glance around me. Golly, I can see now how people could come over for a visit to France and decide to stay longer and longer.  What beautiful country I’ve gone through in the last week!!  I was amazed — beautiful sweeping green fields, poplar trees along the highways, excellent roads and typical, cute French villages along the highway and nestled against the mountainsides in wide, colorful valleys.  Have seen some breathtakingly beautiful scenes alright!

Another feature that makes this country so pretty is the plentifulness of rivers — real, honest-to-goodness rivers with numerous tributaries.  These rivers are not like those flowing mud-holes of Italy, but are clean, wide, and crossed in numerous spots by picturesque and efficient bridges (efficient except in the middle where one invariably finds a section blown out — however, rapidly repaired by our engineers).  At one point I could see six different bridges crossing the same river at different levels, and there wasn’t a one that didn’t have a whole section out of it. 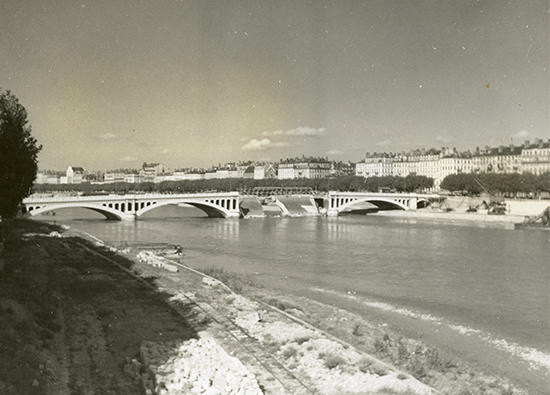 René told his family that a “feature that makes this country so pretty is the plentifulness of rivers — real, honest-to-goodness rivers.” Shown above is the Rhone River with Lyon in the background.