Heard today over the radio that Nice was taken. [Nice was liberated on August 28, 1944.] It is good news alright, along with all the other news of fast moving Allied troops. From the looks of things now, it’s going to be tough trying to get a leave to visit anyplace for some time, so don’t expect news of Jeanne, Lilice, etc. until you get it. If there is a way of finding out anything I will.

Our place here has appeared to be a fairgrounds more than anything else — with all the tents up and the innumerable civilians wandering through the area day and night, peeking in the surgery windows, watching everything that goes on, and coming around with donations of food for our mess.  Yes, donations of wonderful big tomatoes and cantaloupes.  Some have even come with eggs, for which they want a piece of chocolate or a little coffee.  Meats, coffee, cigarettes, chocolate, butter and milk, etc. of course, are the items they have been terribly short of, but at least in the country sections they have had apparently plenty of vegetables.

The country round-about is really beautiful, very fertile and green.  Have had a little sprinkling but not much to bother about. On the way here it was funny the way every time we stopped, the people would come around and offer us cantaloupes, and once, while we were whipping down the highway, a little gal threw a cantaloupe at us — probably if it had landed in our midst it would have knocked someone out.  But as it happened it even missed the trailer we were towing and bounced on the other side of the road.

News items: New Chaplain by the name of Magee. New officers, both on the Medical Service, Capts. Long and Malone.

Living again with Bryner, Welles and Jones. Bryner has been ill, but is O.K. now.

Watch for more of this letter
September 3, 1944 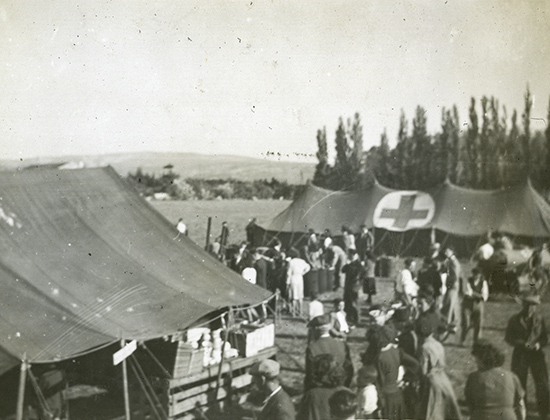 René’s caption for this photo was “The crowd around our mess tents interested in watching the ‘monkeys at the zoo’ (us) eat!!” 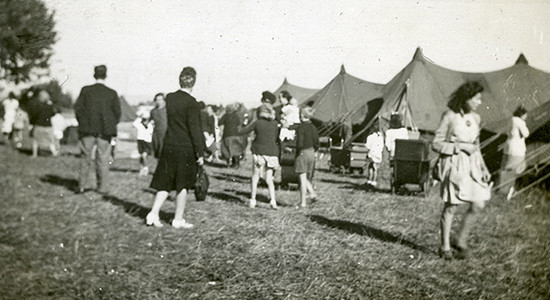 René’s tells his parents that “our place here has appeared to be a fairgrounds more than anything else – with all the tents up and the innumerable civilians wandering through the area day and night.”