No letter from René on October 7. Here’s an excerpt from the journal of Dr. Philip Westdahl, about their arrival and early days at Epinal.

We arrived in Epinal itself in the evening, after a 3-hour trip. Epinal is a textile industrial city, through which flows the now battle-famous Moselle River. The “Krauts” had done a very thorough job, as usual, of demolishing every one of its 5 or 6 bridges across the river. The Moselle itself is not more than 15 to 20 yards wide in this vicinity, but quite pretty, with well-landscaped parks along the riverside and the usual picturesque homes with steep slanting roofs, beaucoup alcoves and chimneys. There was considerable destruction of the buildings in the vicinity of the bombed and demolished bridges, and already the occupants and shop owners were busily cleaning away the debris and reconstructing.

Our own hospital area was quite intact, only occasional broken windows giving evidence of damage. There were several large buildings, the largest one resembling somewhat the S.F. county hospital plan, with several wings connected by covered passage-ways. It had been an old French military hospital and for the past 3 years was occupied by the Germans. The signs in the hallways and on doors were a curious mixture of German and French. Many of the German “pin-up” pictures still remained in place, and in a room which the Nazi officers apparently used as their club, a large German eagle sitting on a swastika was painted on the wall. A very imposing bar with beer spigots also adorned a corner of the room, together with an elevated platform – apparently used by the orchestra. These Nazis lived well.

This was an ideal set-up for a military hospital. We were close to the front so that patients reached us within a few hours after being wounded. All departments – receiving, x-ray, shock, surgery, mess and wards – were under one roof, so to speak, so that patients were easily moved about in a heated building. There was adequate room in surgery to accommodate 4 teams at one time. The receiving and shock wards were quite large and roomy, and able to accommodate a large backlog of patients should that situation arise, and it did on many occasions.

Our own quarters, too, were very comfortable, in a large building, which had formerly been the Laguna Honda Home of Epinal. The rooms were small, but light and with steam heat! And to say the least, we were out of the mud!

For the first time in our overseas career, we were close enough to the lines to hear the continuous thundering of the artillery barrages. At night, the flashes from the big guns would throw a sudden glow on the horizon. Frequently, the big 240mm Howitzers would rattle the window panes. 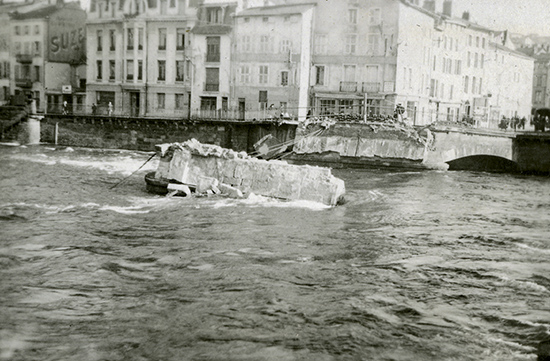 Phil writes about the bombed and destroyed bridges over the Moselle River in Epinal. 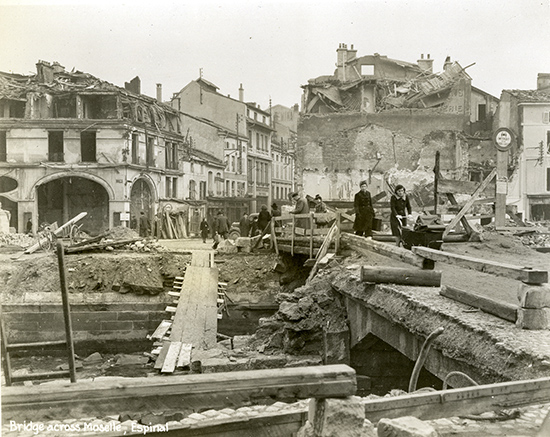 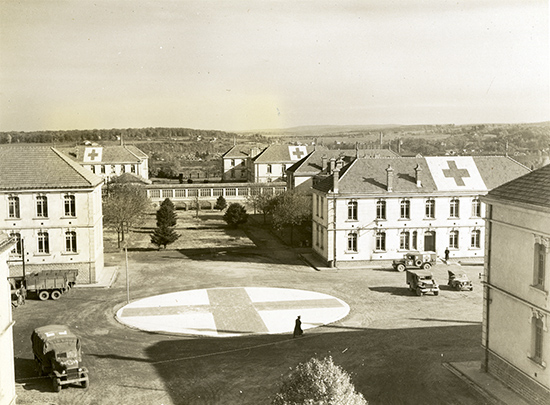 The hospital the 59th used in Epinal.