Yesterday A.M. worked on wards as usual and then in the afternoon we took a hike and went over the obstacle course. The hike was, in all only about 6 miles and though we have not had any such exercise really planned in the last 2 months, we have all done considerable walking around this camp – walking just to the hospital and back a couple of times a day being quite good exercise in itself and then those of us who have walked to the movies have had quite a little extra foot exercise – so the hike wasn’t really much for anyone.

We had a lot of fun at the obstacle course as it was quite a toughy. There was another one of those water holes that necessitates swinging on a rope to get over it. This proved the nemesis for a couple of our tall boys, namely Sewell Brown and Carroll Russell. Sewell dunked himself at least 9 times in trying to get over. He would manage just to barely get a foot-hold and then would swing back, thru the water, to the original side. Occasionally he would let go alright and land in the water on the far side, only to wade back to the original side to try again – he just wouldn’t give up! Finally, he managed to get over in one piece, slightly drenched up to above his knees, but still happy. Russell did just about the same thing, having laughed at first when he was watching Sewell’s antics. Unfortunately, no one had thought to bring a camera with them so that the act could not be preserved for posterity.

Last night we spent playing bridge over at the officers’ club after seeing a Lilly exhibit at which we were given a few samples, such as Merthiolate, Seconal, etc. Had a good evening of bridge with Bob & Bam, then home to bed early.

This A.M. I was amazed to have Wally Greene ask me, while we were taking showers, whether I knew what I was doing today at the hospital. I said I didn’t know I was doing anything special, so he then told me that he and I were doing a hemorrhoidectomy together. The fellows at the hospital have arranged now so that some of our men can do some of the operating, i.e. others besides Mattie.

George Wood and Hamilton did the first hemorrhoidectomy on the schedule and then Wally and I got our fingers working. The fellow we worked on had three pretty good sized hemorrhoids. Wally did the first one and then had me do the other two. As you know, I’ve helped on a few before but never actually did one myself, so this was swell.

Watch for my next letter
October 9 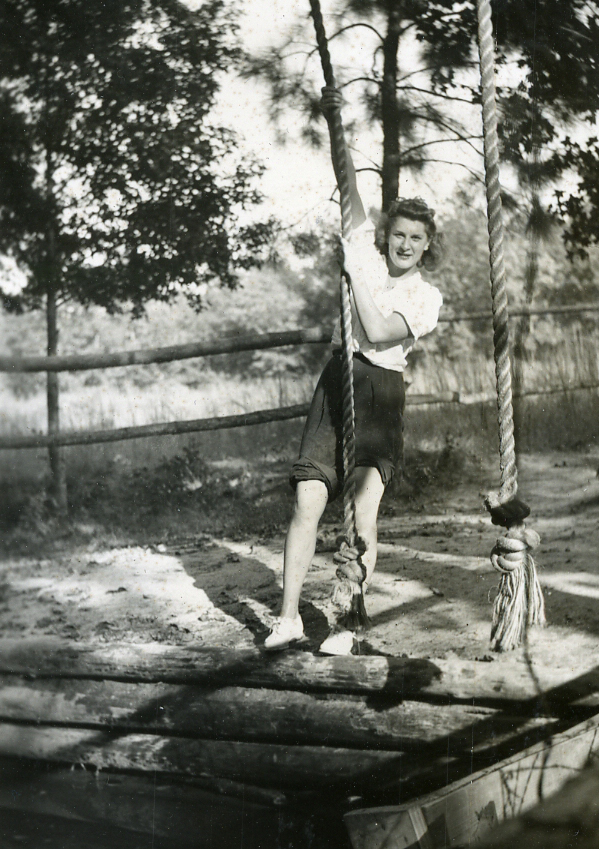 There aren’t any pictures of the doctors swinging on the obstacle course rope today, but there is one of Lois giving it a try! 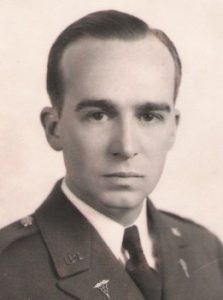 Working in surgery with Wally Greene, René did a hemorrhoidectomy by himself for the first time.