Yesterday morning we all awakened alright, but it was torture to climb out of bed. Every one of us was stiff as the dickens. Particularly behind the knees and thighs. We finally managed to live through the calisthenics, however. Whether the knee-bending in calisthenics accounted for most of the stiffness, or whether it was the baseball game, we are not too sure. However, I think that it was a combination of both, for neither one alone could do so much damage in so little time.

Yesterday afternoon a gang went swimming, leaving at 1 P.M. and returning at about 4:30 P.M. It takes about 20 minutes to get out to the beach. They really fixed it up nice this year. The Red Cross is not running it as I thought, but the local headquarters outfit has taken it over. They cleaned up the beach tremendously, have a separate section for soldiers (i.e. for military personnel) and it is patrolled by M.P.s so that fewer things are stolen this year than last. They even had a band out at the beach house. They have lockers, showers, etc. No refreshments there, as yet, but it would certainly be the spot for the Red Cross to do their refreshment-serving.

We cooked on the beach for a while and then got brave enough to try the water. It was plenty cold at first, but once in for about 5 minutes you didn’t mind it and it was really fine. There were a lot of rowboats and some sailboats around, and some went sailing while others jumped into some of the rowboats. Don and I got in one rowboat with some of the enlisted men and then they proceeded to sink it by rocking it back and forth until it was full of water. However, it was in shallow water and we managed to tip the water out of it again. The water is extremely clear.

The weather has certainly taken us by surprise. We sort of anticipated that we would have a gradual build-up – after all, it has only been a few weeks now that it became “springy”, but we have suddenly been thrown into the middle of summer in the last three days. If this gets any worse, we’ll be ready to wilt.

Last nite walked down and back to the show with Bret and Jack and Fadley, and even at 7:30 P.M. it was stifling hot. Show was pretty poor last nite – “Powers Girl”.

This A.M. it was only slightly easier to roll out of bed, but calisthenics were not too bad. After breakfast we went out and had two teams of officers playing baseball against each other for about an hour and a half. Quite a work out. This afternoon I’m going to loaf a bit after writing this. 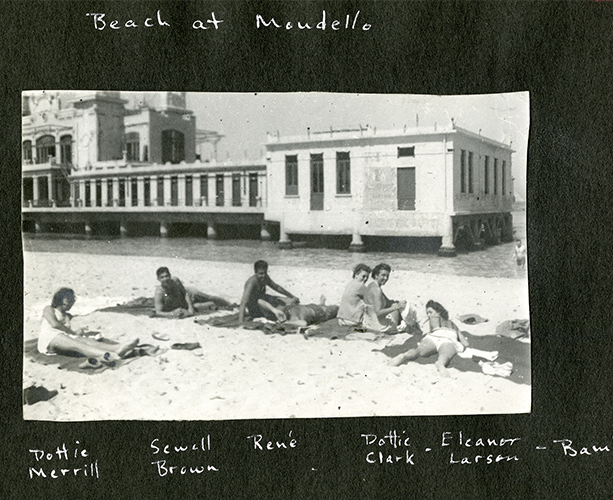 René and the “gang” at Mondello Beach — not far from Palermo.

Some other views of Mondello Beach 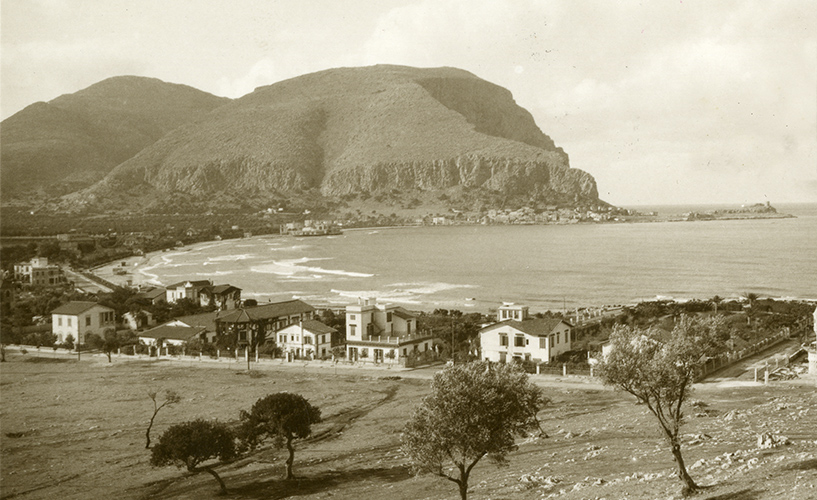