So thrilled you liked the book cover, Mom. Perhaps we shall be able to pick up a few more odd things. However, the town has been picked over pretty well and prices have gone up pretty high. One has to do quite a bit of looking and haggling to get anything worthwhile anymore.

Glad you were finally able to get films for us, Dad. It is now absolutely impossible to get any here, and the printing has gone from bad to worse. Sooo, the more printing paper we get the more we can print in our own dark room and the better pictures we will be able to get.

Lois has had the giggles the last few days. She blames it on poor Carroll Russell. She says all she has to do is look at him and she bursts out giggling. He really is a kick, comes out with some of the screwiest remarks every so often, and of course, Lois is his best audience.

Yesterday we both realized that there was one thing we hadn’t written to you about. Lois has a new ring – one of the drivers gave it to her. He made it by pounding out a two-bit piece. It turned out very well, a plain silver band. She wears it as a guard for her other ring, and, of course, when she first wore it, there were numerous cracks and queries, which were really funny.

Last night we went to our new theater. It’s really quite spacious and the seats are far more comfortable than those in the old theater. The show was “The Sea Hawk” with Errol Flynn. It was in old Doug Fairbanks style – the time of the Spanish Armada moving on England. ‘Twas pretty good. One thing we miss, or rather two things, I should say, are Mickey-Mouses and Newsreels. Have only seen one newsreel since we have been here. Perhaps they don’t think it worthwhile to show those, as news would be a few months old, but still I think they would be interesting.

We have really been laughing at Lois’ family because they have been writing so much about the picture of her that someone had seen in the Newsreel – and about all the fuss they have been making to find out what theater the newsreel is playing etc. etc. For, as you no doubt have found out by now, ‘tain’t Lois at all! Heck, the closest she has been to a plane was this A.M. when some screwball flew over the camp and if he had let his wheels down he could have easily taken the top off the surgery tent. I think the nut was a cousin of one of the nurses, one who is kind of a flibberty-jibbet, a flitter-flutterer, if you know what I mean.

One of Lois’ patients the other day yelled out of the side of the tent, “Hey, Eddie!!” He was calling Eddie Welles, who, it turned out, went to school in Riverside with this patient. ‘Tis just like the time when I went downtown and bumped into a cousin of Bill Newsom’s who was a 1st Sgt, at one of the warehouses. Both he and Bill were surprised to find each other here.

Ho, hum, things are mighty quiet today – in fact, have been for the last several days. My boys have become traffic cops after a fashion – they have been directing customers to our neighbors before they even get to my desk.

Enclosed is another money-order for $100. Would have sent it sooner but with change to sun-tans; buying a few things; laundry and cleaning bills; and other people being short of money (i.e. some of the men, for whom the cards were not so lucky), etc. I have had to delay.

Incidentally, I once queried as to what you were doing with the money – whether Wells or the U.S. is paying interest or whether you have had need of it?? No answer! Are you getting cagy?

Watch for my next letter on
May 30 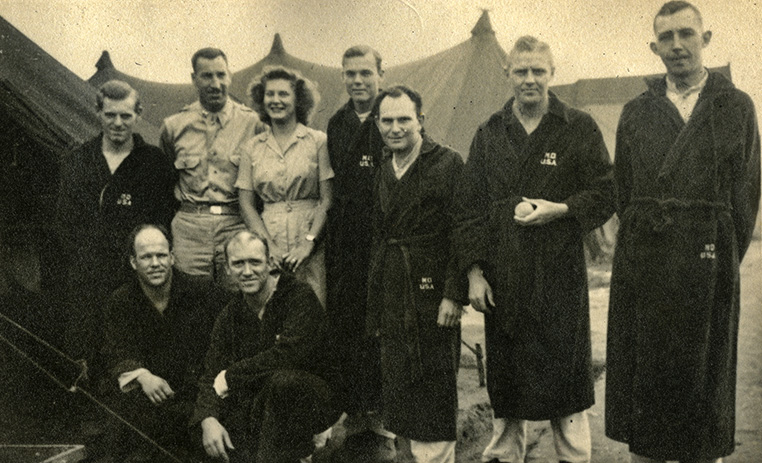 Dr. Carroll Russell and Lois with some of their patients. René says that Carroll gives Lois the giggles. Carroll “really is a kick, comes out with some of the screwiest remarks every so often, and, of course, Lois is his best audience.” 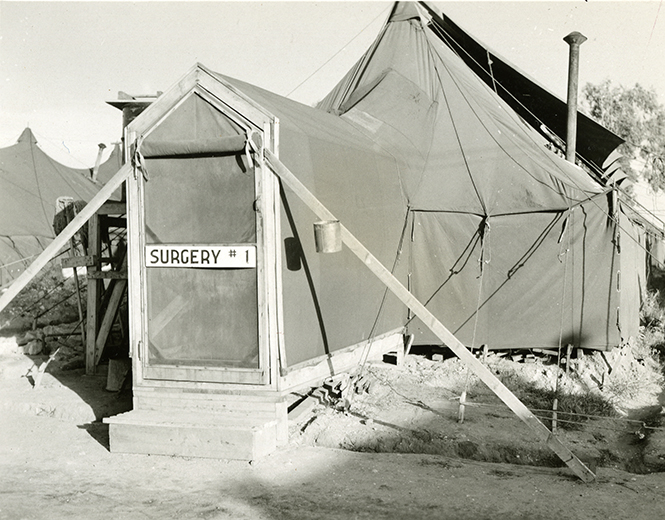 “Some screwball flew over the camp and if he had let his wheels down he would have easily taken the top off the surgery tent,” René explains. 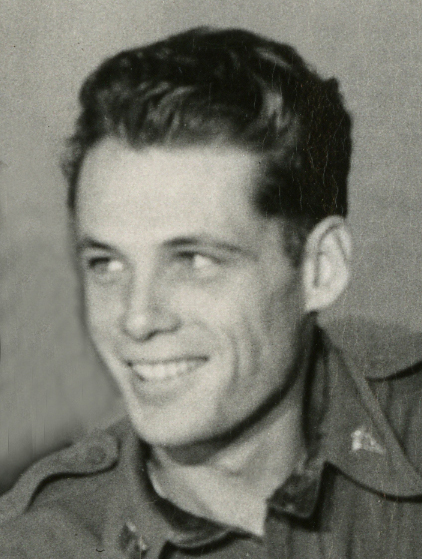 One of Lois’ patients turned out to have gone to school with Dr. Eddie Welles in Riverside.