I have been kept darn busy during the last week or 10 days. Yes, I’ve got many more patients than I had in Ward 16 at the County. Mostly mumps and Victory Measles; a few true measles, a couple of meningococcemias (without meningitis), a couple of meningococcic meningitises, a typhoid and a Shiga dysentery. I’m wondering how much mumps and measles there is back in the U.S. because most of the cases we are getting are coming from there, having been able to trace definite contacts back to cases left in the U.S.

As to therapy, sulfadiazine has been doing the trick nicely in the meningitis boys and also in the meningococcemias.

As to the soldier I mentioned in my last letter – the one who got better on marpharsen – well, he up and fooled me and went very sour after a couple of good days and on post nothing specific was found except brain edema. Whether it was actually luetic or just a virus encephalitis, is pretty hard to determine here.

I have been so busy that I had to give up one of my wards – i.e. the medical one, and am now strictly an Isolationist. Poor Eleanor Larsen has been taking a ribbing, as she was the first nurse to work in Isolation and darned if she didn’t come down with German Measles a couple of days ago. She is doing fine, of course. Sewell Brown is still ill, but doing well. The rest of the boys are back on their feet again, also, as is Chris Colletti.

Time out – one of our boys just brought me in a nice canned-chicken sandwich on toast.

We had a party the other night and it was a pretty good one. It was given out at what used to be a good restaurant with dance floor and outdoor gardens, etc. ‘Twas really pretty nice and we had a band from one of the outfits around here, plenty of sandwiches and plenty of champagne. On the way back, George Davis, Liz Liss, Lois and I in a jeep — Lois got tired of the plain scenery of the road, so George satisfied her by taking her up three-foot banks on either side of the road, just to see what was on the other side. Those darn things will climb anything. Finally had to throttle Lois, as she kept up just like, “Do it again Daddy!”

The nurses gave a party last Wednesday (a week ago) that was also quite a success. It was given at a place closer in town — an eating place used by some of the Army outfits now, and they had another band and a good dance floor besides “Carmen Miranda.” Well, actually you must understand that Carmen herself was not here, but our Corporal Sateja, who attends to all the pay vouchers for the unit, is an old hand at the circus, having been born and raised in a circus. Anyway, he has perfected a Carmen Miranda act that is a wow. In fact, his act was put on in town at the same time Martha Raye was on, and it was quite a hit. The other night, however, was the first time most of the officers and nurses had seen it, and it really was a hit.

Next week we are having a small dinner party that ought to turn out to be real fun. It is a “Promotion Party” given by George for himself. As of day before yesterday, it is Captain Davis. There are only going to be 16 at the party, including the Colonel, Roy Cohn and us. Lois is making the invites and Roy and Lois are making up poetry for after dinner speeches.

Food has been pretty good of late and we have had quite a little chicken, both fresh and canned, mostly fresh – some roast beef, ham, etc. So really, as far as the 59th is concerned, and others around us, hardships there are none.

Watch for my next letter on
March 29 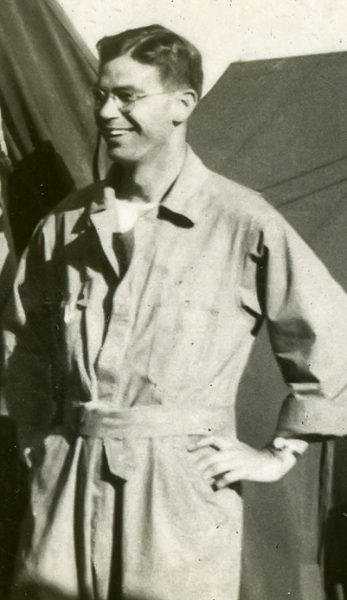 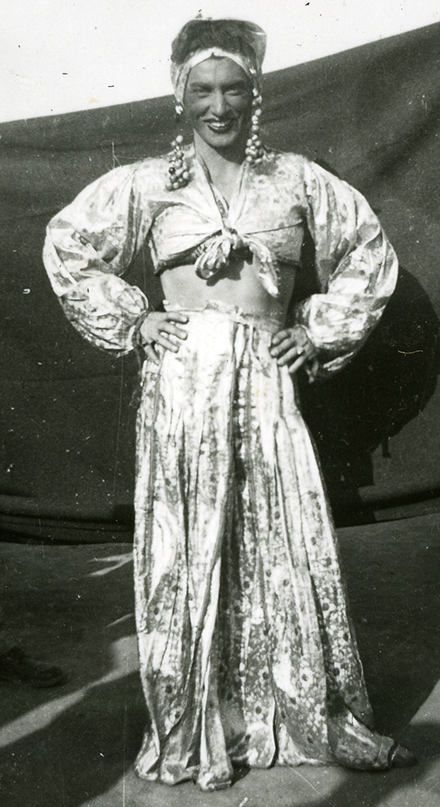 Corporal Charles (Chuck) Sateja – served in an administrative role in the 59th Evac Hospital, but also entertained the troops as Carmen Miranda. After the war he worked as a trapeze artist “The Great Sateja,” and later as a circus clown with Ringling Brothers and Barnum & Bailey Circus.