June 24 we left bright and early at 5:25 A.M. Roy would always tell us the night before at what time we were expected to pull out and then, long before that time would arrive in the morning, he would be prancing around like a caged lion hurrying everyone up so that, in the end, it turned out that we would be leaving anywheres from 15 to 45 minutes ahead of schedule. But, that is Roy — he’ll never be different. Some of the guys moaned a bit about this, but for my part, I was all for it.

Some of the time, Roy would give instructions to me that I would misinterpret and naturally catch hell from him. Then at other times he would try to signal what he wanted us to do and his signals were not explicit enough or were confusing, so that we would end up where he did not want us. But all in all we got along very well. I certainly think that it was no little feat to bring a convoy like ours that great distance with inexperienced drivers, none of whom knew anything about convoy driving, over roads about which no one knew anything — to bring them all that distance without the slightest mishap to vehicle or personnel, and to do it in record time. Yes, I think that not only Roy, but all the drivers deserve a great deal of credit.

That fifth day was quite a day. We were on the road for a little over 15 hours and yet only traveled some 242 miles. Reason: we ran into plenty of traffic and it rained some when we were way up in the mountains. At two different points, British Bren-gun carriers (long flat trailers) skidded in the mud and had a devil of a time getting back on the road. The second one actually turned over and managed to block the passage for a long string of trucks that were both in front and behind ours. We had to stop and wait for them to clear the road, and it was most annoying because of the heat, the long hours, etc. When one is on the go it isn’t bad, but if one has to wait somewhere in the middle of a trip like that, it gets awful annoying.

One of the interesting things we passed that day, and also on some of the other days, were the convoys of returning prisoners. One rarely saw a guard with them. There would be whole truck-loads of prisoners and the only allied soldiers would be the driver and perhaps one guard for every two trucks. No, neither the Italians nor the Germans were at all anxious to part company with the trucks that were eventually taking them to the U.S. Can’t blame them, can you? We talked to some of the guards when one of their convoys was stopped along side of ours, and they said that when they stopped for rest, they never had to look around for the prisoners to be sure they were all back in the truck; for, if they started out without a couple of them, the prisoners would come running and yell so they could climb back aboard.

At one place we bumped into a fellow who had been guarding some 30 prisoners, and when he counted them the next morning he somehow found that he had collected 18 more during the night for the count was then 48.

At the end of the fifth day we found ourselves in the little town of Chardiman or something like that. [Probably Ghardimaou] The only field we could find to bivouac in was pretty well fertilized and was rather bumpy. But finally we found a portion of it that was not so bad and all hit the blankets early – Roy again on the trailer and me in the truck.

Watch for my next message on
June 25 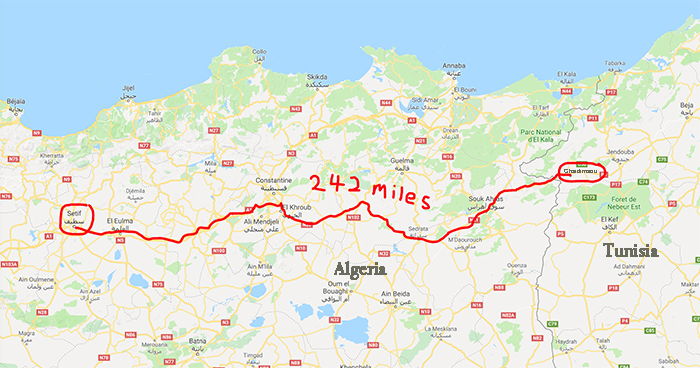 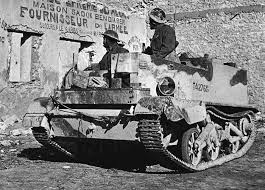 Today was an especially long day due to traffic and rain in the mountains. Also, René notes, “At two different points, British Bren-gun carriers (long flat trailers) skidded in the mud and had a devil of a time getting back on the road. The second one actually turned over and managed to block the passage for a long string of trucks that were both in front and behind ours.” Pictured above is a British Bren-gun carrier.