On the last day the convoy didn’t leave so early, getting our start only at 7 A.M.   From there on in we began to see plenty of interesting things — bomb craters, cemeteries, and German, Italian and British tanks, trucks, etc. wrecked by the side of the road. There was very little British equipment and much less American equipment — apparently all of that had been hauled away already. But boy there were plenty of German tanks, trucks and planes to be seen. We passed several parties of prisoners working on the roads and they seemed to be doing a good repair job under the supervision of only one or two guards to any large group.

While Roy was doing that hunting, we parked on a side-street and broke out the lunch. What a place Bizerte is — there is really nothing left of it. There can’t be more than fifty of the natives living there anymore — there isn’t one house that is anywheres near intact — and we saw all this those few minutes we were there. Our bombers really did a job there, and strangely enough they managed to miss the places that later were important for us, i.e. the harbor installations, barracks, roads, etc. Yes, those boys are O.K.

Finally Roy came back and led us to the place we were to stay. It was right on the water-front in what used to be a hangar. There was plenty of evidence of bombing there, with mostly French and German wrecked planes all over the place. However, some semblance of order had been made and the wreckage was pretty well piled up in specific spots.

We were given cots and the boys quickly set about putting them together, putting up their mosquito netting, and sweeping up the place. They really went at the work in a hurry – none of that gang afraid of work! Some of the boys made a bee-line for the water for a swim, but I kind of stuck around in the hangar to help get things organized, as Roy had gone off to find out all the dope he could.

That evening we got a pretty good idea of what our duties were going to be. We saw some of the ships upon which we were to be put, and anticipated plenty of action. We were told to arrange things in groups of three men to one officer. Roy, it was decided, was to rather arbitrarily pick the men for each officer. He picked the cream of the crop for himself, but as all the boys that we brought with us are top men, it really worked no hardship on anyone.

Despite the fact that we had been told that they had been having nightly air-raids, we were completely un-disturbed that first night in Bizerte. 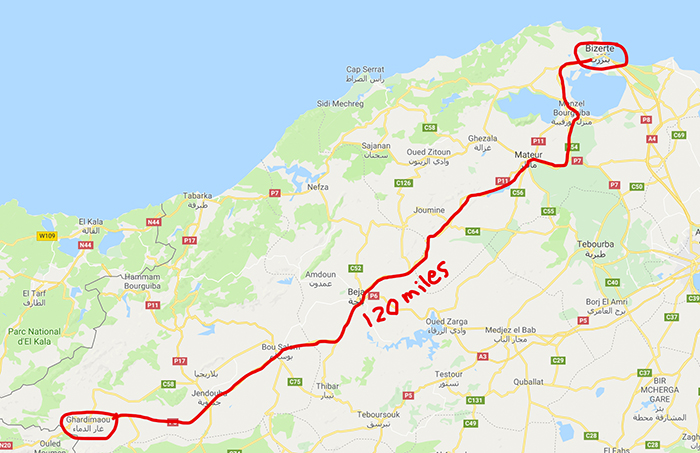 Click on map to enlarge
Day 6 – Ghardimaou to Bizerte, Tunisia 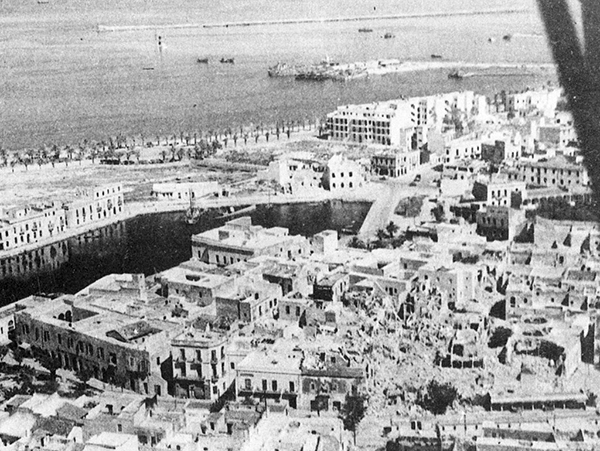 On June 25, Philip Westdahl (back in Casablanca) writes: “We are hit pretty hard by an epidemic of diarrhea most likely on a dysentary basis. Half of the remaining officers and about 20 men are sent to 66th Station hosp. today. In the meantime the rest of us continue to sit on our proverbial behinds waiting for the next move. All tents with the exception of actual living quarters and mess tents have been torn down and all equipment is packed and segregated into piles ready for loading.”