On July 21, I went in from the Lake after lunch and went up to the 56th. I talked with Col. Winans first and then with Major Rippey, who informed me that the Capt. had left about half-hour before – having talked himself out. They had fluroscoped him with Barium meal and found nothing, as expected. It was only then that I had an opportunity to tell them more about the Capt. his actions, etc. Col. Winans agreed with me that the Capt. would very likely return if sent out on another trip, i.e. return to the hospital. Major Rippey was a little doubtful. However, both definitely agreed with my diagnosis.

On the 22nd, the Captain asked me to go to the 56th and invite Major Rippey and Miss Riggo (his nurse) to bring another one or two officers and some of the nurses for dinner on June 23. While I was at the 56th, I found out that the General was still there, so I went in to see him. He was surrounded by about 4 full Cols. And I don’t remember what else – but I went up and asked him what he had to report – whether we would be relieved or not. He said that his executive officer, some Col., had arranged to contact Admiral Connally to get us off the ships, as he wanted us to rejoin our outfits so that we could shove off from Algiers in no time, if needed. The General was flying that afternoon to Sicily.

That afternoon I returned to the ship and loafed around in the shade – what little there was. That had been pay-day for the ship’s company, so I wasn’t surprised when, later that night, Fuqua handed me $350 to keep for him, to put in the QM Savings when we got back. The dice sure are good business partners for him.

On the 23rd, still no word as to when we were to be relieved. However, saw the flagship and found out that Admiral Connally was back, so, from Lt. Grady, found out that the wheels were grinding and we should know by the next day. I wonder!

Watch for my next letter on
July 30 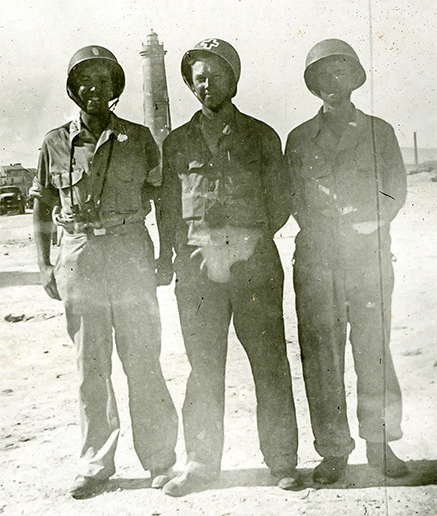 (Left to right) René with Q. Fuqua and Bernie Herrington

On July 23, Dr. Westdahl writes in his journal about the journey he and the rest of the 59th are taking, “The valleys and rolling foot-hills between Tlemcen and Oran are a sight for sore eyes – absolutely beautiful vast wheat fields and grape vineyards with rich dark soil. All along the line, even in remote little spots, the Arab and French children hail us with the V for victory sign. We have our first glimpse of the Blue Mediterranean at Oran; at this point it doesn’t compare with San Francisco Bay.”