For all of us here it was Xmas four days ago. Mail and packages came in by the droves that day and it took the boys hours to separate it. They got to the 1st class mail separated pretty well by about 6 P.M. and as I was going to go down and take Lois to dinner in town I took the nurses’ 1st class mail down to them. When I walked into the building I felt just like Santa Claus, for I was mobbed when the gals saw the mail sack. They went through that like a bunch of hungry wolves.

Gil Bishop went down there 2 hours later with the packages and he likewise had the same experience, only worse for he had several sacks of packages for them. After Lois and I came back from dinner we sat around and opened all the packages that she got and had quite a time reading all the letters both of us had gotten as I had read none of them up to that time. Then, when I got home to camp later that night I found the package that were there for me. Yes, ‘twas really a good Xmas!! You mention that we should get 7 packages between us and I believe that we have gotten them all.

Oodles of thanks for the letters. It’s really a grand feeling to be getting mail over here, especially such nice, long newsy letters that you people get off. It’s an especially good feeling to know that a letter takes only a couple of weeks, or less, actually to get over here if everything goes right, and as a consequence when we get a letter saying everything is O.K. at home, we can feel pretty certain that even at the time we are reading that letter, everything is still O.K.

I think I told you that Cy Johnson is now Capt., Elmer Chappell is now Major, and Larry Hunt is now 1st Lt. Since then, Bill Collie made Major, Gil Bishop to 1st Lt. Gil really deserves it, in fact, with the exception of Cy and Elmer, he deserved his promotion more than anyone. He’s really a swell kid and knows his stuff. He goes around with Helen Nelson, the dietician who, likewise, is a swell person. Gil was supposed to supervise the sorting of the mail the other day, but when they pulled out this official letter, bearing the news of his promotion, well, someone had to take over right away – for he was far from that mail tent in no time. That was the same night he and I played Santa Claus for the nurses, and we combined all that and made it a celebration night down there.

As you no doubt already know from radio broadcasts, which we likewise heard in the wee hours one morning a few days ago, F.D.R. and Churchill were around this neck of the woods. In fact F.D.R. passed by our area twice in one day. I wasn’t around here when he came by in the morning and consequently Davis and I pooh-poohed the Padre and other notorious exaggerators when they told their stories about having seen F.D.R. going whizzing by here. Around dinner-time, however, we had a warning of things to come because of M.P.s around, etc., and almost everyone stood by the road and waited just inside our barbed-wire fence.

Sure enough, they both came by in the same car with Hopkins and all, and we got a good look as they slowed down just by the front of the hospital. F.D.R. waved at us as we saluted him, and it really was a wonderful feeling. Golly, how that man gets around!!

‘Tis truly amazing. Just as amazing, of course, is the wonderful system of secrecy that the F.B.I. and the MPs have when something like that is going on. For, except for the relatively few people around who actually saw the President, no one seemed to know anything about his being here until the newspapers came out with the news when it was announced that he was back safely in the U.S. Yes, it really gave everyone quite a thrill to know that F.D.R. was over here.

Had another interesting experience last Sunday. Davis, the Col., and I took a nice ride out in the jeep, taking along with us my camera and the Col.’s camera. We wandered through the town, showing the Col. some of the queer Arabian sites that George and I had discovered in some of our previous wanderings – intentional and unintentional both. Then we went out to the airport, went through some of the planes there, talked with many men, and in general found out a lot of interesting things.

We met some of the men who were flying the British Spitfire planes – American aviators who had been in England for months before they came over here. As it turned out they were apparently here as protection for the President. Anyway, we got talking to them and the Col. induced them to go up and take his camera and take pictures of our hospital area. There was a Major Avery and a Capt. Hill and a Capt. Fleming. All three are young fellows, the Major being only 26. Capt. Hill has the distinction of being the first American pilot to knock down a Nazi plane in this war – this episode having occurred over England sometime last June or July.

Well, Major Avery went up in his plane and flew out to our camp area while we stayed at the airport. He flew over the Hospital area and pointed it out to Capt. Hill as Hill, who was already in the air, was the best photographer of the two. Hill was going to land and get the Col’s camera and then go up with it and snap pictures of the hospital from the air. Just from the looks of Avery, George and I had a hunch what was going to happen, and sure enough, when we returned later to the camp, we found out that Avery had swooped down close very the camp and then roared off and up. In fact, he was so close that Major Collie was all for running and shutting off the generator for fear that our power line, which is only about 16 or 17 ft. off the ground, was going to be taken along by the plane. Yes, Avery gave the boys and girls quite a thrill!

When Avery and Hill landed, we gave Hill the Col’s camera and he went aloft again. Avery joined us and we went out to the area to be there when Hill was snapping the pictures. He likewise pulled a few shenanigans and gave the gang something to talk about. The pictures he took turned out nicely.

George and I drove Avery back to the airport and had quite a chat with him and the rest of his gang. They are a swell bunch. We invited the three of them to join us at the Nurses’ Quarters that night as the nurses were having an Open House. The fellows hadn’t had any chance for any fun around here and as they had been up further front for a while, they were just looking for a good time. Well, we managed to give them a pretty good time that night. We even had some champagne for them. 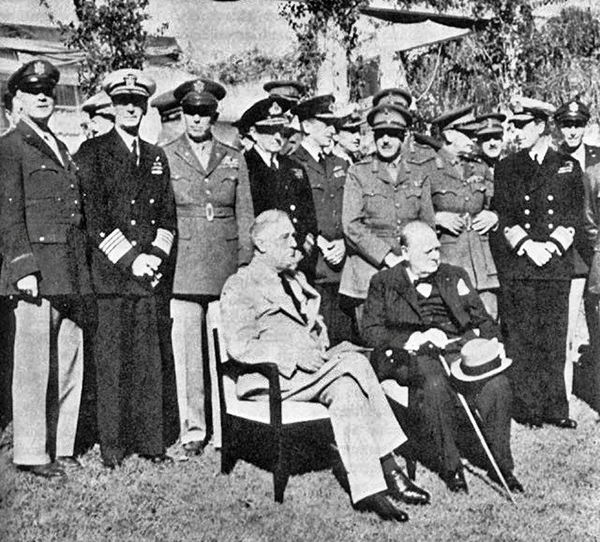 In his journal on January 27, Philip Westdahl, MD, writes: “We listen to a British broadcast explaining why the president was in Casablanca. Thus far all we know is that the conference reached a decision on the allied plan of offensive for 1943. We hope for bigger hidden meanings. We are present where history is in the making.” 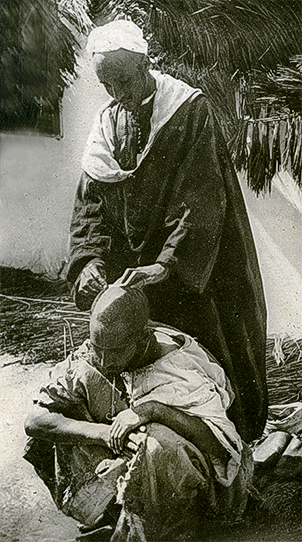 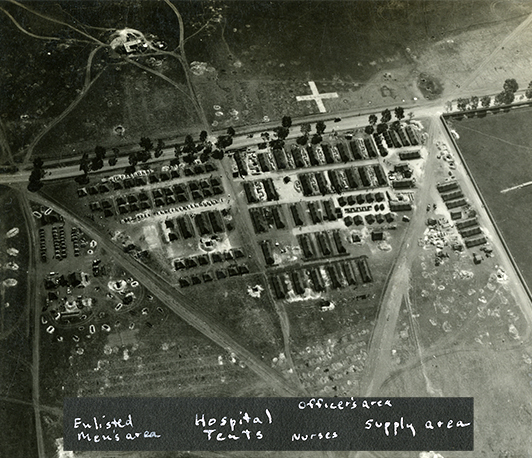 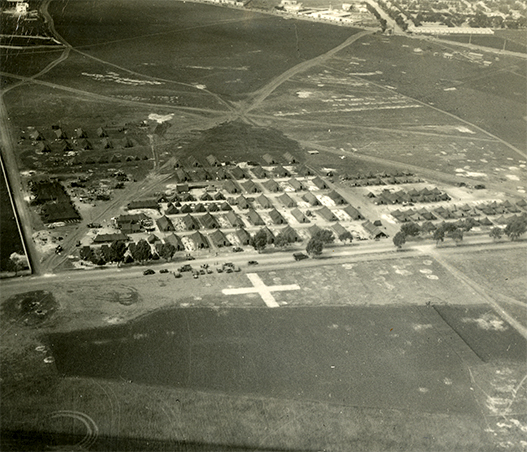 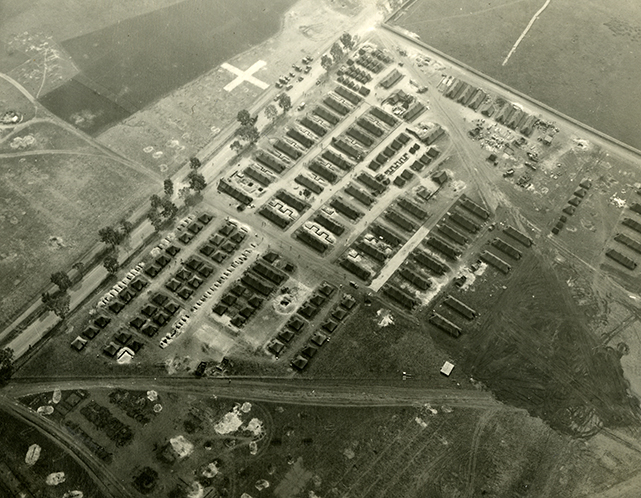 Aerial photographs of the 59th Evacuation Hospital in Casablanca