Yesterday I received your package with asparagus, artichokes, chopped olives and the wonderful pair of warm socks that Henriette made for me. Thank her just oodles for me, but shall try to drop her a note in a couple of days, anyway. Thanks, oodles, to you for the swell canned goods.

I’ve had a little diversion the last few days, finished now, however.  I darn near froze to death standing around out in the open for several hours on end, but as long as I didn’t have to do it for more than a couple of days it was O.K.  After the first day I knew just how cold it would be and so I borrowed Bret’s air-corps, leather and fleece-lined jacket (which he had been given by a pilot when in Sicily) and after that I was plenty warm.

The deal was that a new outfit here was attending a “Mine-School” and they didn’t have a medical officer as yet, so wanted one to hang around at the fields while they pulled up or blew up the mines in the process of their education.  Since the fields were some distance from any of the hospitals, they wanted someone on hand with them.  Luckily, I got no business at all.  I learned how they find and pick up mines, but did my learning, thank you, by the side of the road, picking up nails, etc. with the detector. Unfortunately, there was no shelter that those not working in the mine-field could stay in (incidentally they were German mines), so we built fires out in the open and either got a lot of smoke in our eyes or stayed a ways away from the fire and froze.

Coincidences continue to occur, for a Chinese fellow in this new outfit got talking to me and soon I found out that he lived on Broadway and Mason in S.F., that his brother was bar-tender at the California Tennis Club, that this kid tended bar at the Mark Hopkins at various times. He is originally from Montana where he was quite a high-school football player. He was interested in medicine, and was already enrolled in Stanford for Pre-Med when he reached 21 yrs. of age and two weeks later found himself in the Army.

The news has certainly been good in the last week. Our only big fear, now, is that the push by the Russians will be so strong that they will push the Germans through our lines. Golly, when those guys get started, they really keep going. They’ve really played a pretty tricky game – what this war would have been without them or with them on the other side, I’d hate to try and imagine.

Some of the boys just coming in from skiing – still look healthy! What a tough life! Bret’s sled still going strong, too – the men have been using it lately and get a big kick out of it. 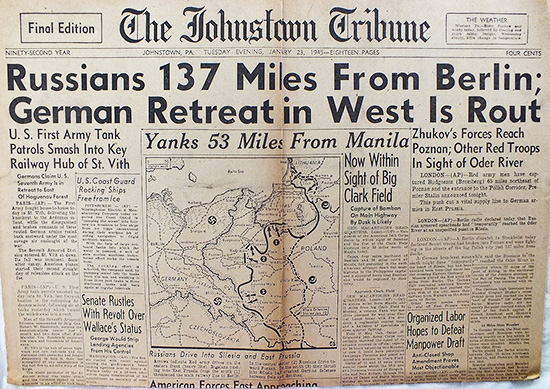 René comments about the good news about the progress the Russians are making against the Nazis. 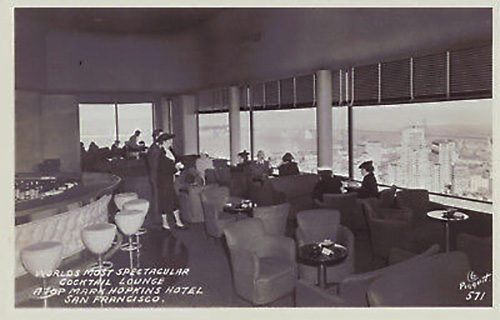 René tells his parents that he met a fellow San Franciscan who had lived at Broadway and Mason and who had worked, for a time, as a bartender at the Mark Hopkins Hotel in San Francisco.

In his journal, Dr. Phil Westdahl writes, “Apparently our withdrawal to Epinal was ordered because of the danger of a German breakthrough at that point. The 7th Army was committed to holding a section, and in spite of small German gains and bridgeheads across the Rhine near Strasbourg, the 7th succeeded in maintaining their line. During the month of January we functioned as a combination holding hospital and evacuation hospital. We took care of casualties who could stand the long trip back, most of whom were German prisoners. We attempted a few secondary closures of wounds with a fairly high degree of success, even though majority of them were 10 days old and starting to granulate.”