The hospital gets larger day by day, with medical patients being in the majority. For a week I worked on a surgical ward and was on call for anesthesia, but the medical service got swamped and consequently Paul Stratte and I were shifted over temporarily to help the medical boys out. At the moment, both Paul and I have two medical wards – each ward consisting of 18 patients. Most of the patients have bronchopneumonias, pharyngitises, sinusitises, bronchitis, etc. We have had a few jaundice patients, a couple of malarias, a couple of rheumatic fevers, along with the usual gastro-enteritis cases, possible ulcers, etc.

The surgical service had a few interesting cases, such as subdiaphragmatic abscesses, fractures, appendices, etc. They likewise had a few hernias, hemorrhoids, papillomas, etc. We likewise get an occasional accidental gunshot wound, but so far have had nothing in the way of battle casualties.

Our surgery is pretty well set-up and things are straightening themselves out pretty well. Had a compound fracture of tibia the other night and I was supposed to give the spinal, but the patient was drunk and was thrashing about a bit and Gerbode couldn’t hold him well enough. So, when I didn’t get in right away, Mattie decided to do it. He also had trouble getting in and then finally succeeded. A half hour after the spinal was given (ephed being given also), when they had just finished debriding the wound, the patient ceased breathing and despite all efforts for the next hour he failed to come to again. One of those 1 in 100 spinal deaths! Mattie and I were both very thankful that he had given the spinal, for it was just one of those things that do happen every so often, no matter what is done.

Serge is now back at work and feels fine. He apparently had dengue, or at least he thinks that is what it was. No one else seems to know much about it.

The other day the Padre had Martha Raye out here to entertain the patients and all. She and Andre Baroush have been around entertaining considerably in this neck of the woods. She has done a good job here in giving the soldiers something to see and to talk about after. She undoubtedly will have plenty to talk about herself when she gets back to the U.S. We are now setting up a small stage here for future entertainment. One of the soldiers in this neighborhood is quite a ventriloquist and pulls a Charley McCarthy stunt. The Padre is arranging for a minstrel show of some kind for Monday, and he intends to get some other shows in the following days or weeks.

About three weeks ago they opened up a PX in town for officers and nurses. We got ration books and were able to buy candy, cigars, and cigarettes, pillow cases, sheets, and towels on the ration basis — 3 cartons of cigarettes, 6 cigars, one pillow case, sheet and towel per person, and 10 candy bars per person per month. Of the ten candy bars, four have to be Life-Savers or Necco Wafers. As you can well imagine, I took the latter.

They had some nice things at the PX and I ended up buying myself a darn nice trench coat for only $15, a swell pair of high boots of English grain leather ($8) and a pair of regular high shoes of English grain leather ($5). The trench coat is really a nice deal and probably would have cost around $30 at home and I never felt up to spending that much for one back there.

Even Lois bought a pair of the boots, as they are not only a good buy but are very useful around here or anywhere where it is muddy or rainy on and off. They are really most comfortable also.

It was really funny down at that PX when it first opened. There was a mob waiting to get in at all times, and as the store wasn’t big enough to let in more than a few at a time there was a line ¼ to ½ block long at most times during the day for the first two weeks. Stratte, Bishop, Fadley and I happened to just hit it right the first day the place opened and arrived there 10 minutes before it opened and were inside within 15 minutes. Others waited in line for anywhere from 40 minutes to 2 hours.

Today the recreation tent is being fixed up – we finally got some panel lumber and are able to put a flooring in the tent. We also got some tables and benches and some chairs from a gang that left nearby, and the tent ought to be fixed up pretty well in another day.

Last night Paul, Bam, Lois and I went out for dinner and had a fairly good dinner, though it turned out that the restaurant only had fish last night, instead of the usual meat. Today, in our own mess we had regular “chawin’” meat that was O.K.

Yesterday we had a regular medical conference with some other medicos in on it. These others, some of them, were friends of Roy’s when he was in medical school.

Watch for my next letter
February 27 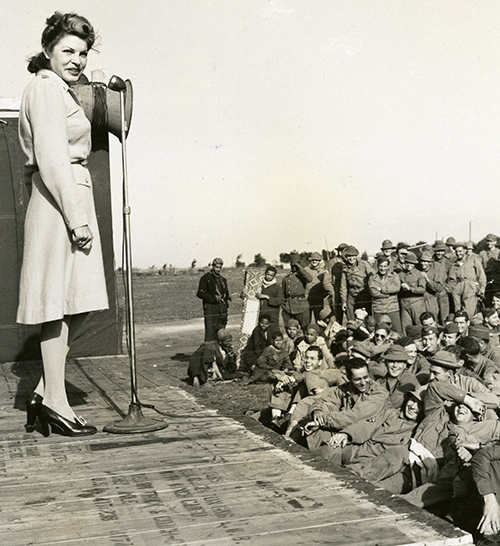 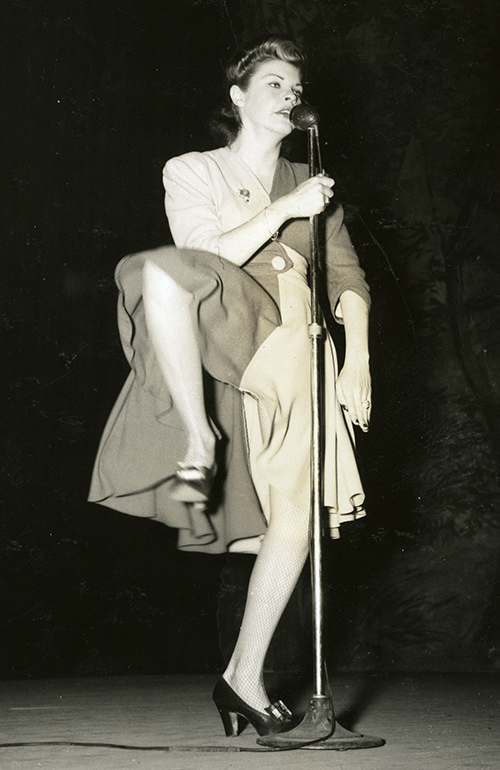 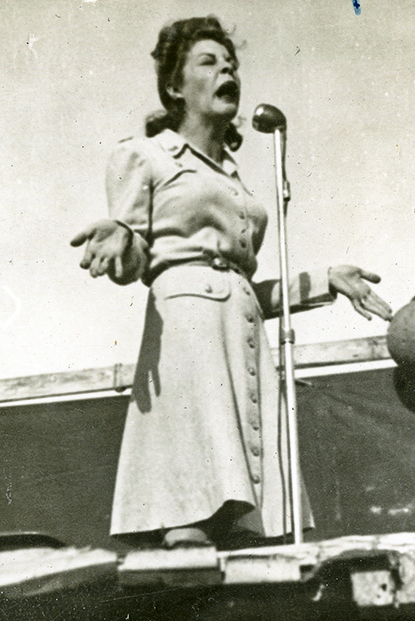 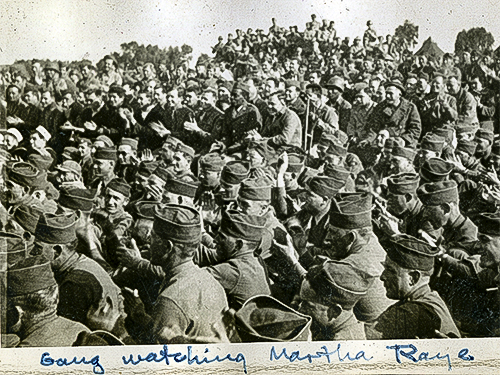 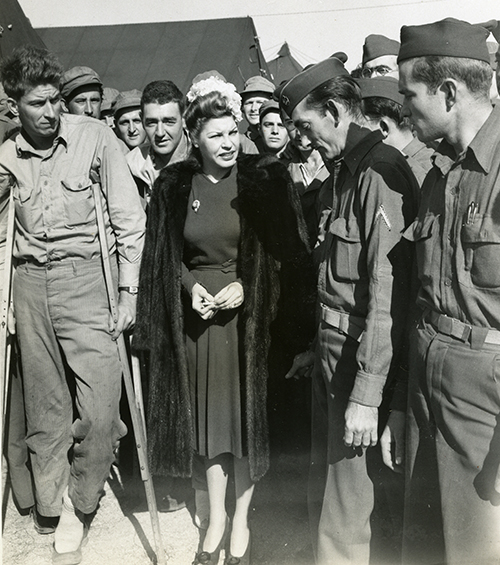 Martha Raye visiting some of the patients 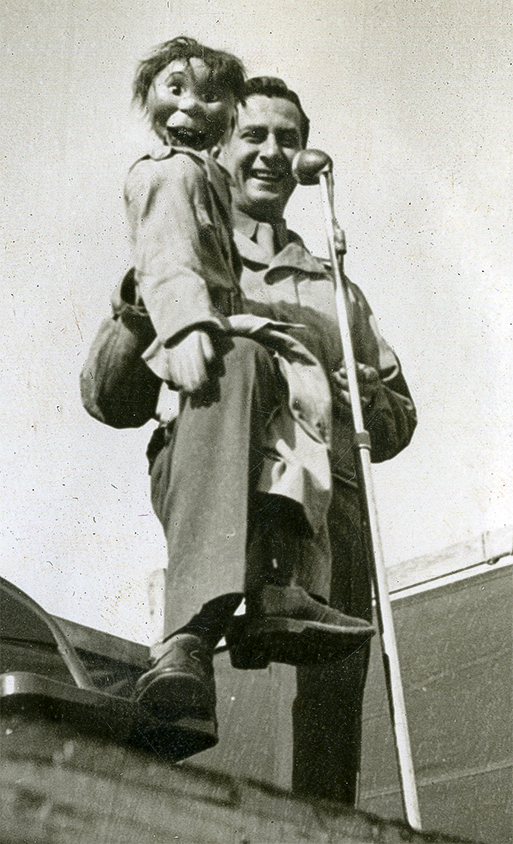 “One of the soldiers in this neighborhood is quite a ventriloquist and pulls a Charley McCarthy stunt.”