Alain, you wrote to me that the black sheep of the family was dead.  That may or may not be true from what Jean-Pierre says and believes. The subject is a distasteful one and one hard to understand except if one believes that there was something definitely wrong, and there probably was, mentally with Raoul.  It seems that be became quite an anti-Semite and, in fact, an out and out agent for the Gestapo.  He wrote in his newspaper a lot against the Jews — even stating that he was a Jew and brought up thusly, but had been treated so terribly by his own family, etc., ad infinitum.

Once when George Bauman visited Jean-Pierre in Lyon just some time after J.P  had been married — at that time it entailed crossing the de-markation line between Occupied and Free France, i.e. Vichy France — he returned to Paris and soon was summoned to go to the local Police Station.  He was told that they had known that he had gone to Lyon, but he denied this at first.  However, the Police officer was a former French officer and as George had been an officer also, the Police officer told him he would be lenient, but he wanted the truth.  So George admitted having gone to Lyon, but not with any sum of money, as they tried to pin on him. That is, he had taken no extra money with him out of the occupied area.  Then the Officer told him he had never heard of anything like this before — that the informer had been George’s own brother-in-law, Raoul, and even showed George the evidence in writing that Raoul had given.  George was let off but that, of course, was the time they pulled stakes from Paris and left for Nice pronto.

Mathilde sent for Raoul and, with Lilice and Claudine in the next room, asked Raoul if it was true that he had turned George in to the Police.  Raoul admitted it and said that he had to, because that was his business.  Some time later, Raoul was sent by the Germans to Germany, as things were getting too hot for him in Paris.  And then later than that, one of his wives — I don’t know which one — got a letter or note of some kind saying that Raoul had been killed in Germany.  J.P. has the feeling that may have just been another ruse of Raoul’s, and that since he had by then so many enemies in France that it was the safest thing to do — to create the impression that he was dead at least.  Whatever the truth, however, it is certainly best that he be considered just that, dead.

I feel I’ve been darned lucky the last few days and only wish that you had been with me visiting with Jean Pierre and Doude, too.

Well, to all of you, a VERY MERRY CHANUKAH & XMAS & A HAPPY NEW YEAR – it ought to be almost Xmas time when this arrives and if so I expect that it will add considerable to your feelings, as I know the last few days have certainly done a lot for me. It’s hard to put on paper, but I think you all know just what I mean.

With oodles of love to you one and all — 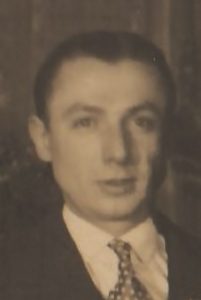 René tells his parents about the “black sheep of the family” – Raoul Neuburger. Raoul was the brother of Lilice Neuburger Baumann and Jeanne Neuburger Salomons, and uncle of Lilice’s children Jean-Pierre, Yvette and Claudine, as well as the uncle of Alain Dreyfus. 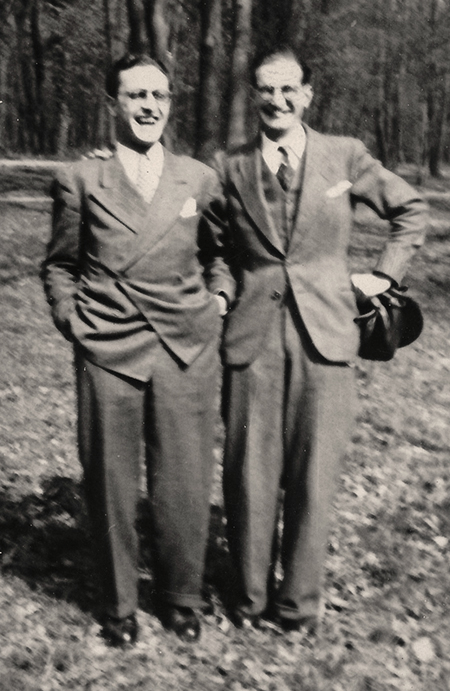 Alain (shown above at left with his cousin Jean-Pierre after the war) had written to René that Raoul Neuburger was dead. But Jean-Pierre told René he believes that Raoul escaped to Germany and is still alive. As it turned out, both Alain and Jean-Pierre were correct: Raoul did go to Germany, but he only because he was arrested and deported there in February 1943. He died sometime in 1943.